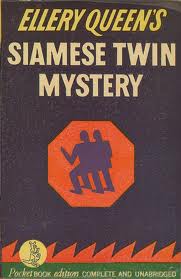 As a rampaging, out of control fire races up a mountain-side, Ellery Queen and his intrepid dad Richard, are trapped in a house with a murderer. Not to mention, a pair of Siamese twins and an assorted group of crazies. Actually, the Siamese twins are the sanest of the whole bunch.

"I'm wary of everything in this grotesque melange of wickedness." So says Ellery at one point and who could blame him?

THE SIAMESE TWIN MYSTERY is not only a rather good mystery, but also a thriller in its own hair-raising way. It's also the first Ellery Queen I've read in which the two sleuths are on their own, away from New York and their normal cop retinue of specialists and muscle. Nor are father and son accompanied by Djuna (one wonders why not) their devoted will o' the wisp servant.

The two detectives (okay, one 'official' detective and one genius detecting son) are traveling out west somewhere when they find themselves driving along a deserted stretch of road (these are the days before McDonald's et al, littered the highways and byways of our land) which seems to lead nowhere but to a house atop a mountain. It is night and the Queens are lost, exhausted and out of patience. Thinking they've found a temporary safe haven, the Queens are immediately put on their guard by the disjointed conversation and general unease of the house's few inhabitants. What goes on here?

Well, of course, if the house were full of normal people engaged in normal pursuits, there'd be no mystery and we could all go home. But the Queens have stumbled (almost literally) across a house full of shadowy secrets - at first glance, a Bleak House of incipient horrors.

"Brr!" muttered Ellery in his father's ear as they followed the stately figure of their host down the hall. "Nice place for a murder. Even the wind is performing in character. Listen to that silly howling, will you? The banshees are out in full force to-night."

Of course, Ellery is totally prescient. Murder will occur sooner rather than later.

Not immediately, of course, give our detecting duo a couple of hours to take the measure of the place. But before the night is over, Dr. John Xavier, famed medical man currently conducting heathenish experiments (there are a variety of Siamese critters in little cages in the lab - enough to give anyone the creeps), attempting to discover a way to successfully separate human Siamese twins, will be shot dead. Who, among the ill-at-ease bunch of guests is the killer?

The twins in this instance are two pleasant, good-natured teenage boys who are remarkably adept at dealing with their condition. Though when Richard Queen first glimpses their combined shadow in an unlit hallway, he is frightened nearly out of his wits. The old man has a vivid imagination.

At any rate, the whole question of who is guilty may be a moot one, as a forest fire at the base of the mountain currently rages out of control, heading right for the house which, by the way, is perched on a precipice.

An aside: Given a choice of being burnt to death or jumping to my doom, I think I'd jump.

Anyway, as the prickly but stalwart group desperately tries any and all exhaustive measures to save themselves and the house from the blazing inferno, there is still a murderer to catch.

A good book for a dark and stormy night.

Don't forget to check in at Patti Abbott's to see what other forgotten or overlooked books other bloggers are talking about today.