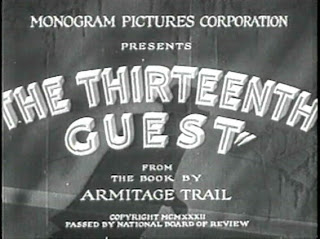 It's Overlooked (or Forgotten) Film day once again. Todd Mason, our genial host, will have all the links at his blog, Sweet Freedom, so don't forget to check in and see what other films, television or other audio/visuals, other bloggers will be talking about today. It's always an eclectic mix.

My entry is the 1932 mystery, THE THIRTEENTH GUEST, a film directed by Albert Ray and starring, of all people, Ginger Rogers. 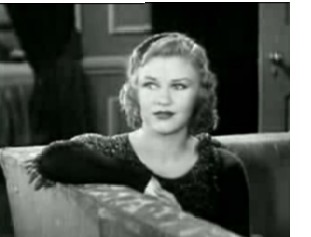 Ginger looking befuddled and who could blame her?

This is one of those movies where the mysterious bad guy goes around dolled up in black from head to toe so we can't see who he is. The garbed killer spends most of the movie lurking in a secret room from whence he can watch what's going on in the deserted old house and oh yes, by the way, electrocute anyone who picks up a certain phone, while occasionally letting out a hideous screech just to let us all know he's supposed to be nutso. I love it.

Here's the situation: Thirteen years before the current story opens, a macabre dinner party was held in said old house belonging to the Morgan family. Thirteen settings were arranged around the table but the thirteenth guest never showed up. The head of the family (the father of girl who grew up to be Ginger Rogers, our plucky heroine) dropped dead as soon as he finished reading his proposed and rather strange will. The police soon determined though that the death was not murder but death by natural causes. Convenient - huh?

His wife is so stricken by the event that she seals up the house, leaves everything exactly the way it was - including the dinner table with chairs pulled up and settings still in place - and moves away. The house is left deserted by the family for thirteen years. 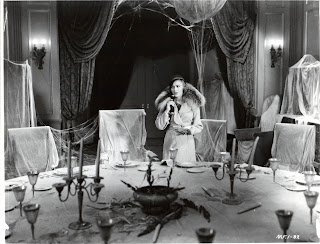 Ginger wondering, "Am I de trop?"

When Lela Morgan (Ginger Rogers) the heiress, turns 21 she receives a call from the family lawyer to go to the deserted house and meet him there. (She also has a letter from her dead father with a mysterious set of numbers.) And of course she goes at night when the house is most mysterious and spooky - I mean, wouldn't you?

Almost immediately thereafter there's a case of mistaken identity (not fairly revealed with observable clues but it's not that sort of story), and an unpleasant murder in which the body is found propped up at the dinner table.

The cops, of course, are flummoxed so what does the police chief do but call on his old friend, private detective Phil Winston (Lyle Talbot) for help. The smirking Winston works hand in glove with the cops (even giving orders and throwing his weight around) and they rely on his sleuthing smarts to solve the case - just like in real life.

When the family lawyer gets murdered and propped up at table as well, it's obvious that the killer is after the very same guests who were at the original dinner. Why? Well, that's never really explained even in the end. These sorts of movies never make much sense anyway, that isn't the reason I watch them. Murder with all the trimmings is to be expected, but if you also expect logic, then these are not the movies for you.

At any rate, I would have liked it if a couple more murders had occurred and showed up at the dinner table too, but you can't have everything. 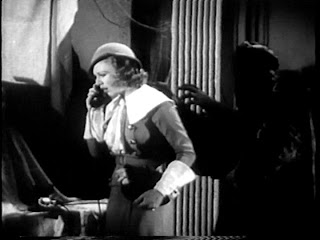 My favorite scene - watch out Ginger!!

The cast is so/so except for Ginger who is always fun to watch. But I'm a fan of this sort of thing and I'm not all that picky, so I enjoyed myself and so will you if you're like me and don't expect too much except a darkly mysterious old house, a disguised killer, a group of assorted suspects, a will steeped in stupidity and murder most foul and illogical.

The movie is available to watch for free at youtube.

P.S. This story has been filmed a couple of times under slightly different titles, so don't be confused and misled. Hold out for Ginger Rogers.

P.S. PS. If you expect to find out who the thirteenth guest was or was not in the end - don't hold your breath. You get an answer but typically, it makes little sense.
Posted by Yvette at 9:30 AM