Forgotten Book Friday: A CIVIL CONTRACT, LADY OF QUALITY and THE CONVENIENT MARRIAGE by Georgette Heyer

I doubt those of us who love Heyer would have forgotten her books, but it is hard to remember all the individual titles since she was a very prolific writer. Heyer not only wrote Regency romances, but 18th century ones (the era of powdered wigs) as well and also some rather good mysteries. (If you're not into romances, then for goodness' sake read the Heyer 'contemporary' mysteries, they're wonderful and are readily available in re-issues.)

The main thing I love about Georgette Heyer's historical romances (besides the topnotch characterizations and intriguing plots) are the good manners. These British societies of the past thrived on societal strictures (okay, occasionally inane strictures to be sure), but I'm convinced it was the insistence on good manners that helped keep everyone in line.

I'm of the opinion that there's nothing like a well-written romance novel to fix whatever ails you. The Regency romance was invented for the doldrums of winter. When you've read one too many mysteries and need a change of pace from murder most foul, the Regency is a perfect alternative. (Although there are occasionally some fancy dressed fops up to no good in these books, if anything as sordid as murder occurs, it's off the page and usually far, far away.)

A CIVIL CONTRACT (1961) is, for all intents and purposes, one of the best (if not the best) marriage of convenience stories ever written (I think I know whereof I speak since I've read a million of 'em). In this book I recognized many plot contrivances and twists of romantic fate that other writers would go on to 'borrow' for their own 'm.o.c.' plots over the years.

While Harlequin and Signet and the rest of 'em were/are publishing Regencies and other historical romances on a monthly basis - books I unashamedly gobbled up then and occasionally now - the authors, I realize, had lots to thank Georgette Heyer for. It was Heyer who set up the formula for these stories, a formula which even now is followed pretty rigidly. (Well, it was probably Jane Austen who perfected the original formulation, but you know what I mean.) Never mess with perfection.

Why? Because the reader expects certain things to happen in these sorts of books and hell has no fury like a thwarted romance reader.

A CIVIL CONTRACT is not strictly a 'romance' as we typically think of them. There's more here than may, at first glance, meet the eye - keen social observation for one thing: the occasionally unpalatable mix of marriage, social standing and the harsh realities of economics. Money is at the heart of the story of Miss Jenny Chawleigh - daughter of a very wealthy 'Cit' who, at the urging of her ambitious father, marries the financially strapped Viscount Lynton thereby saving his family home and lands. Though the 'm.o.c' motif is one which usually leads to romantic entanglements between the two main characters who remain unaware of said 'entanglement' until the happy ending - in this case, Georgette Heyer has given her likable characters a more realistic 'happy enough' ending.

Captain Adam Deveril, honorable officer and gentleman, one of the Duke of Wellington's men, must leave the field of battle when his father, the Viscount, is killed in an accident. Deveril inherits the family title and thus, since he is the only son, cannot risk being killed himself even if the battle to oust Napoleon is still on-going.

Unfortunately for Deveril, his feckless father was a wastrel who gambled away the family fortunes. Without money Deverill will be forced to sell off everything he owns, including the much beloved family home. Not only that but he is now unable to offer for the beautiful woman of his dreams since she, not to put too fine a point on it, must marry money as well though her family is in less straitened circumstances than Deveril's.

Enter Jonathan Chawleigh, one of Georgette Heyer's more vividly inspired and likable creations - an enormously rich but vulgar 'working man' with multiple dealings in the City and a rather plain daughter whom he wishes to see advance in society. Chawleigh, having hoped for an Earl, settles for a Viscount.

The daughter turns out to be the best thing that ever happened to Adam Deveril, though it takes him a long while to realize this. And while she may not be the love of his life, it turns out that the 'love of his life' was not especially suited to the life Adam would have wished to live. After all, a man must be comfortable to be happy. Very wise of Heyer to note this.

I have two other Heyers to recommend, books I've just finished reading during my own personal Georgette Heyer Mini-Read-A-Thon: 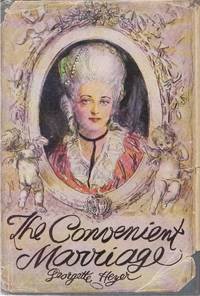 THE CONVENIENT MARRIAGE (1968) is set in the years before the Regency when men were wearing heels, jeweled frock coats and both sexes wore white wigs piled high and Marie Antoinette was still Queen in France - the grumbling of the 'lower classes' still fairly subdued.

Horatia Winwood, a daring seventeen year old chit of a girl devises a plan to save her older sister from a forced marriage to the Earl of Rule. The plan works better than the impulsive girl had hoped and therein lies the tale. Lots of fun, good manners, a duel, a kidnapping and a terrific love story. 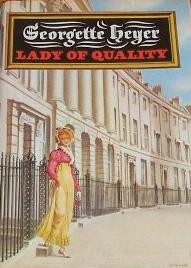 A LADY OF QUALITY (1972) Set in the city of Bath, in the last days of the Regency, this is the story of twenty nine year old Annis Wychwood, beautiful, rich, outspoken and independent. Having refused all offers of marriage (she values her independence too highly), she is quite content to remain 'on the shelf' in charge of her own life.

But fate has other plans. Due to a series of haphazard circumstances, Annis is put temporarily in charge of a naive young girl on the run from her suffocating family and eager to sample the delights of society. The girl comes complete with a forbidding guardian (don't they always?) who is rumored to be the 'rudest man in Bath.'

Though, admittedly, both main characters are not as likable as many of Heyer's other inventions, it is still fun to read about their trials and tribulations - you know how it goes with the path of true love. As is usual with Heyer, the vibrant secondary characters almost steal the show.

Since we're expecting snow over the weekend, it will be a perfect time for me to settle in with a bunch of Georgette Heyers, cups of tea and some serious snacking.

Care to join me?

Also, don't forget to check in at Todd Mason's blog, Sweet Freedom to see what other Forgotten or Overlooked Books other bloggers are talking about today. Todd is doing the hosting duties for Patti Abbott this week.
Posted by Yvette at 2:19 PM