A Rant: Television, I Hardly Miss You. 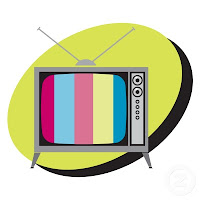 I haven't done a TV post in ages primarily because I don't watch television anymore. Cable fees are an abomination - need I say more? And since most series episodes are available online, it's not really the end of the world.

Yeah, life was easier with cable, but I manage.

Yet even with all the online availability, I still find myself NOT watching much TV. I don't like having to search for episodes at network websites - maybe that's my lazy (or stubborn) side.

But the truth is, there's not much on television worth the effort of looking or maybe it's just that if it's not there I don't miss it. Know what I mean? (Although I will go to the PBS website for Downton Abbey episodes - they are available on the day after - at least they were last season. But even those I sometimes forget to watch and somehow I don't feel especially bereft.)

I guess I'm not comfortable with television that's not on a schedule. (Remember I grew up with television in its (actual) infancy - scheduling was all important back then. We were trained, like Pavlov's dogs, to wait for episodes of our favorite shows broadcast each week on rigidly prescribed days. It wasn't all loosey-goosey like it is today. So my excuse is: I can't break the habit. I was indoctrinated at an impressionable age - by experts.

I can't tell you how many times I've gone to Netflix with every good intention of watching a bunch of TV episodes I've missed, but somehow it never works for me. There's just something about watching shows in a bunch that almost immediately points out their faults - big time. And I just don't have the patience for limiting myself to one show a week, maybe setting up some sort of make-believe schedule. I was not meant to be a television programmer even if all the tools are there for me to play with. Life's too short.

I've tried and tried to watch recommended shows online - really, I HAVE tried - but more often than not, I give up after the first fifteen minutes. I'm sorry but ALL THESE SHOWS LOOK ALIKE (especially noticeable when watching in a bunch) and feature what appear to be the same actors - or at least actors who look and sound exactly alike.

And all these shows appear to have the same premise: an older guy at the head of a bunch of cocky, younger and very good looking three or four politically correct youngsters who all speak as if they're still in high school. (Ye gads does that rankle.) Would you trust the fate of the world to a bunch of callow striplings fresh off the pages of the latest Abercrombie and Fitch catalogue?

And when it comes to cable shows, I'm just not the sort who enjoys watching life as sewage. No thanks to criminals cavorting, puckish psychopaths, teenage vampires, grim bald people dealing drugs (or people with hair, for that matter) or strange people having sex because they can't think of anything else to do. I mean: ugh.

I know I'm not the audience for these shows (far from it), but honestly, I need to vent.

Occasionally I do find some measure of merit in certain shows I might have poo-pooed the first time around - I did enjoy the last episode of SHERLOCK with Benedict Cumberbatch mano a mano with Moriarity. Very affecting. Can't wait to see how they're bringing Holmes back.

I did enjoy re-watching episodes of THE WEST WING a week or so ago. So there are exceptions, but honestly I can't say I miss television much except for the baseball season and football. (I've found a place online where I can stream CNN or MSNBC live so if anything newsworthy happens, I can watch it unfold.)

This weekend I watched football to the point of exhaustion, on my computer - the NFL has a great twenty dollar package with which you can watch full replays of every playoff game including the Super Bowl online just a hours after the actual game is over - all I had to do was refrain from checking scores and Voila! The games this weekend were fabulous, so that helped. I'm signing up again for next playoff season. I may even sign up to watch major league baseball online this upcoming season. It's still much MUCH cheaper than cable. (Currently I'm just signed up for audio.)

So there are many alternatives and maybe that's why I can honestly say I don't miss television much anymore.

P.S. I did try to watch ELEMENTARY, the 'up to date' Sherlock Holmes show on CBS with a female Dr. Watson. Lined up a couple of episodes. Watched for about twenty minutes. That was all I could take. All that angst. All that hand-wringing. It made me cringe.