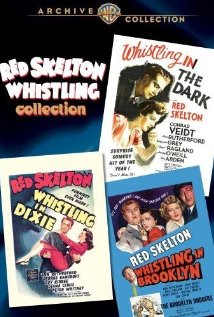 Okay, I admit it, sometimes my memories (faulty as they are) of a movie are actually better than the movie itself - MUCH better. Yeah, it happens. Sometimes movies are best left locked away in a vault, never to see the light of actual day again. There's a reason why God invented memory haze.

But no, I kept thinking of a certain trilogy with a certain actor, so sure that I needed to view the movies again. Have you ever felt that way? When I couldn't find the movies anywhere online - did that stop me? No. My movie memories are infallible. (Ha!)

So I threw caution to the winds and plunked down some cash.

I remember WHISTLING IN THE DARK (1941), WHISTLING IN DIXIE (1942) and WHISTLING IN BROOKLYN (1943) starring Red Skelton, Anne Rutherford and Rags Ragland  as light-hearted mystery comedies kind of in the style of Bob Hope's THE CAT AND THE CANARY and/or THE GHOSTBREAKERS. I was eager to view them again - that's my only excuse. I was in a mood that required instant film gratification. (Or almost instant.)

My friends, even Conrad Veidt playing a charismatic cult leader and low-life bad guy could not save WHISTLING IN THE DARK, the first film in the trilogy. Worse yet, even the great Eve Arden can't save this thing. The plot is not only non-sensical (which is really par for the course and to be expected in these sorts of 'fun' mysteries) but it is totally lacking in FUN.

In all three films, rubbery-faced Red Skelton plays radio personality Wally Benton. He is known as 'The Fox' a howling (literally) radio detective who supposedly sees all and knows all about murder - there's not a plot he hasn't turned into a radio play performed by himself, his girlfriend Carol Lambert (Anne Rutherford) and an assortment of actors, live at the radio station. Each film has the same set-up, Wally is just about to run off and marry his long-suffering girlfriend when a real crime interrupts their elopement.

In the first film, Veidt and his cohorts kidnap Wally, Carol and another woman (the sponsor's daughter) in order to force Wally to invent a fail-proof murder plot (as he does on the radio weekly) which the bad guys will then use to kill a guy who stands between them and a million dollar inheritance. (This was back when a million bucks was a chunk of money.)

Told you it made no sense. But with such a good cast, it should have worked. (In my memories it was a light-hearted romp.)

Except for an amusing first ten or so minutes (better than the rest of the film) in which Conrad Veidt's nefarious character conducts a tree planting ceremony before a worshipping, gullible audience of elderly women all garbed in white robes, the rest of the movie is not only deadly dull but completely unfunny.

Even so, I held out hope for the second and third films, still to be viewed. I hunkered down with a bowl of popcorn and Rocky at my side.

Let's get to the main point which I seem to be avoiding: the young Red Skelton. This is definitely not the puckish and very talented comedian who went on to star in some MGM comedies (usually with Esther Williams) and later became part of television history with a weekly comedy show. My family and I were great fans.

To my surprise, the young Red Skelton, in these early films, comes across as someone lacking not only screen presence, but finesse, timing and oh yeah, talent. At least talent enough to carry a movie. In addition, he makes for a dismal 'romantic lead'. There is no reason why any woman would want to marry him.

Skelton is all bumbling technique and no warmth. You and I both know that if you're going to 'bumble' you need warmth to carry the day. See Cary Grant in BRINGING UP BABY, as an example. But here Skelton just seems weird, klutzy and unlikable. (It might be that with his red hair he needed technicolor, but that wouldn't explain his enormous success later on b/w television.)

If Skelton was meant as a potential rival to Bob Hope, who was working in films at the same time, Hope had nothing to worry about. Hope was always likeable and oddly attractive, even at his most cowardly and egotistical. He was also superb at physical humor. And as for delivering quips, well, Hope was the master of that particular art form so maybe it's unfair to compare.

I'm rambling, I know. But it's been a long time since I watched movies which lived so well in memory and disappointed so much in reality.

The second film, WHISTLING IN DIXIE takes place in Georgia and has an even less sensical plot than the first but contains one sequence which works pretty well: Wally, his girlfriend and a couple of others are trapped beneath a fort in an underground room which is slowly filling up with water. Very well done. But not enough to save the movie.

As for the last film in the trilogy, even the Brooklyn Dodgers can't save WHISTLING IN BROOKLYN. Yes, the 1941 Brooklyn Dodgers, Leo Durocher and his boys. There's a ridiculously unfunny sequence which takes place at Ebbits Field, the old stomping grounds of the Dodgers once upon a time, in which Wally (in disguise) is forced to pitch an inning while trying to save a police inspector from being killed. NOTHING about it works.

Okay, you may ask: why did I sit through these three stultifying movies?

Besides being a glutton for punishment, I guess I wanted to make sure that what I was seeing was what I was seeing, that it wasn't my mood that was tarnishing the films, that my expectations weren't too high. Dammit, I was eager to enjoy them.

All I can say now is I wish I had my twenty five bucks back again. But I learned my lesson. No more impulse movie buys based on memory. Never again.

But of course, there may be someone out there who disagrees with me completely and actually LOVES these movies. Hey, it's possible. I'm no arbiter. If so, please let me know and I will happily send you the three films (which came packaged together) free of charge, just because I'm a nice person. If there be more than one of you, leave comments and I'll use that number thingy to pick the 'winner'. The films are brand new, only viewed once. I don't want them in the house as a reminder of my folly.

Worse comes to worse, I can donate them to the library.

Has this sort of thing ever happened to you? Come on, 'fess up. We're among friends here.

P.S. As for the 'whistling' in all three titles, it has nothing whatsoever to do with anything. Go figure.