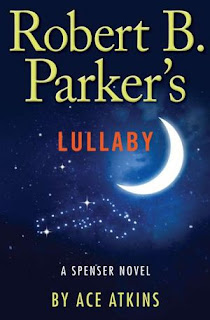 Now normally (as I like to say) I'm not really happy with the idea of keeping a main series character alive (especially one as well known and liked as Spenser the Boston touch guy, private eye) once the original author has passed away as happened with Robert B. Parker in 2010.

But of course there are always exceptions to any rule. For instance, Sherlock Holmes. I'm currently reading GARMENT OF SHADOWS by Laurie R. King in which Holmes is still going strong these many books along in an excellent series which occasionally borders on genius.

I'd read all of the Spenser books over the years and decided to see what Ace Atkins - another favorite author of mine - would do with the rugged and very individualistic Boston P.I.

I was surprised when Ace was chosen by the Parker estate to continue writing the Spenser books simply because Ace is from the South (currently lives in Mississippi) and the Spenser books are So Boston centered.

But I needn't have worried. Ace has managed to do the practically impossible: he has kept Spenser alive, not to mention Hawk and the rest of Spenser's retinue. It helps enormously that Ace is as good a writer as Robert B. Parker was and while he doesn't copy Parker, Ace still manages the flavor of the first person narrative. (I'd thought he'd have to go to the third person.) Ace 'gets' the flavor of Boston, the tone of Spenser's quips, his byplay with us, with Rita Fiori, with Hawk, with Susan and with the world in general. It's not an easy thing, but Ace Atkins has managed to do the almost impossible. I admit I was taken aback by how good LULLABY is. And no I don't think Ace has sold his soul to the devil.

Ace still continues to write his own wonderful books in his own wonderful voice: thrillers and dark, broody crime fiction. And there might even be a future television series in the works based on Ace's current series of books set in Mississippi and featuring ex-Army Ranger, Quinn Colson.

When a young, street-wise girl asks Spenser to look into her mother's murder - a crime for which a  low-life pal has already been tried and convicted - the private eye isn't sure there's much he can do.  But Mattie Sullivan, fourteen, street-wise, growing up in a 'Southie' project, left in charge of two siblings and an alcoholic grandmother isn't taking 'no' for an answer. She is determined that Spenser find the real killer. Spenser is won over by the wise-cracking Mattie (there's something about her that reminds him of him) and brings Hawk along for the bumpy, murderous ride.

I'll be reading the next Spenser written by Ace Atkins - for sure. WONDERLAND, due out in May of 2013.

This is proof positive why you should never say 'Never' - you're bound to have to eat your words.