It's Tuesday and you know what that means: film-talk about overlooked or forgotten movies or other A/V material as prescribed by Todd Mason our weekly host. So don't forget to check in at Sweet Freedom to see what other films and/or other interesting stuff, other bloggers are talking about today.

ANASTASIA is the 1956 Anatole Litvak film (based on a play by Marcelle Maurette) starring Yul Brynner, Ingrid Bergman and Helen Hayes. My post is an unabashed fan letter to Yul Brynner, certainly one of the most enigmatic personalities ever to grace the silver screen. Not only was he enigmatic, mysterious, cool, and incredibly elegant, he was just plain interesting to watch - when he was on screen, everyone else faded from view, even Ingrid Bergman. I don't think there's ever been another actor with the dramatic sense of screen presence that the Russian born Yul Brynner naturally possessed.

He understood his persona, the attraction of his own darkly intense good-looks and how to use them to his advantage on camera. Wearing mostly black or black and white (though in one scene in this film he wears a brown suit which, admittedly, gives him a more 'down to earth' look) he simply seethes with mysterious allure.  And never has a man moved more elegantly on camera than Yul Brynner. (See other examples: THE KING AND I, THE TEN COMMANDMENTS, THE MAGNIFICENT SEVEN, etc.)

In ANASTASIA there is one famous scene where he must walk across the cinemascope screen from one open doorway on the far left to another on the far right where Ingrid Bergman's voice has been calling out to him, teasing him - she's had a bit too much to drink. Brynner is wearing black pants and a white shirt with the sleeves rolled up...sigh.

But when he enters Bergman's room, she's fallen asleep. A gorgeous and very sexy scene though nothing much has happened. It's all atmosphere. With another less elegant, less intense actor, it might not have worked as well.

ANASTASIA is the familiar story of a woman who might or might not have been the only surviving  child of Czar Nicholas of Russia. When the entire Russian royal family was assassinated (crowded into a basement like shooting fish in a barrel) by Bolsheviks, in July of 1918, one of the young daughters, Grand Duchess Anastasia, was thought to have miraculously escaped and been spirited out of the country. The story persisted for years, fueled by the presence of a woman named Anna Anderson who, until her death, claimed to be Anastasia.

Though Ingrid Bergman and Helen Hayes won the awards, for me, it's Yul Brynner who commands the movie and makes more of it than it might have been otherwise. The brilliant screenplay by Arthur Laurents won as Oscar and rightly so. Though today it might seem a bit too talky, more of a 'play' than a movie, I think it works perfectly. It condenses some rather complicated themes and events into one completely understandable whole.

The story is set among a small society of Russian exiles living in France, bemoaning their loss of status, relishing their memories. In the midst of these refugees forced to flee Russia after the revolution, we meet the cynical and utterly pragmatic nightclub owner Sergei Bounine (Yul Brynner) who, with his associates Boris Chernov (the always wonderful Akim Tamiroff) and Piotr Petrovin (Sacha Pitoeff) has formed a 'corporation' with shares sold among their fellow group of exiles.

The purpose of it all is to find the 'real' Anastasia and through her, access the woman's inheritance, millions which sit unused in an English bank, the money then to be divided among the share-holders. To that end, Bounine has tried and rejected several potential 'Anastasias. When he saves poor, tormented Anna (Bergman) from jumping into the river, he thinks he's found the goods.

I am not a big fan of the Ingrid Bergman school of acting. I find her too housefrau, too mannered, to careful, too conscious of what she's doing. She's also, I think, too old for the part but that's a minor point. The story takes place ten years after the horror in that Russian basement, so Anastasia, still suffering from the effects of years in a madhouse, not to mention a train explosion, not to mention possibly being shot by assassins who wiped out her entire family might be excused for not looking young and sprightly. 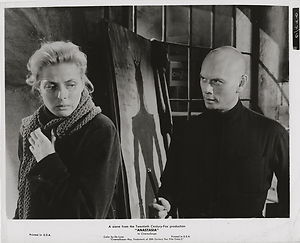 Bounine and his cohorts have a week to turn Anna into the Grand Duchess Anastasia and convince the more influential members of their Russian community headed by the Dowager Empress Maria Feodorovna (the oh so wonderful Helen Hayes) who refuses to see what she considers just another self-serving imposter.

The Duchess's elderly lady in waiting played by the gloriously ditzy Martita Hunt has the hots for Bounine and tries to smooth things along as best she can.

Despite my Bergman reservations, the poignant scene in which the Duchess finally meets Anna for the first time is magnificently played by two experienced actresses in command of their craft.

The screenplay is especially effective during scenes in which the hapless Anna is tutored in the fine art of acting like a Duchess by Bounine. It quickly becomes apparent even to him that the mysterious Anna may be more than meets the eye. We also see the way he begins to look at her, the appreciative glances. Brynner is wonderful at this sort of thing...sigh.

The enigmatic ending is more than satisfying and when seen for the first time, comes as a welcome surprise. An intelligent way to end a story which combines fact and romantic fancy. 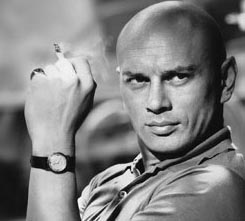