It's Tuesday and as usual, my Forgotten (or Overlooked) Film post is late in the day. This is the weekly meme hosted by Todd Mason at his blog, Sweet Freedom. So don't forget to head on over there for the list of other participants who are/were not as tardy as yours truly.

Though my choice of film for today is pretty recent (2011) and Michelle Williams was nominated for an Oscar for her wonderful performance, I still get an 'overlooked vibe' when I think of it.

I like Marilyn Monroe. I didn't love her. I think I understand what drove her to her death - maybe. It's a shame, but something that was bound to happen. Later I felt sorry for her but wish she'd been stronger and more inclined to stand up for herself. But maybe (or obviously) she just wasn't wired that way.

I was a kid when she died. I remember the day. My dad and I were going somewhere on a bus. I think it was some sort of country excursion with family friends. At any rate, we'd heard the news of MM's death, everyone was talking about it - the day stands out in my mind because I so rarely went anywhere with my father. He was not really the 'excursion' sort. So the two events are linked in my mind. (I have a great picture to remind me of the day, anyway.)

I was a little hesitant to watch MY WEEK WITH MARILYN, thinking it would not be my cup of tea. But I'd read that Michelle Williams 'got' the essential Marilyn, so I ordered it up on Netflix.

It's not a great film, far from it. The whole thing has an air of detachment which I imagine is the director's fault. But the acting is superb. 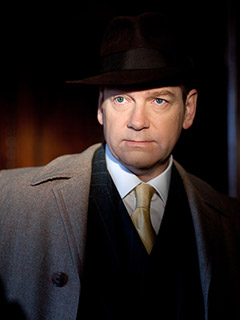 Kenneth Branagh as Lawrence Olivier is brilliant. As infrequently as the film 'comes alive' - it's most always in the scenes with Branagh. He doesn't look like Olivier yet he manages to embody him - which is more important.

Michelle Williams as Marilyn Monroe is almost as good. In the screenplay, she is in London in 1956 to star with Olivier in THE PRINCE AND THE SHOWGIRL, a minor movie (don't think I ever saw it) set in 1911 on the eve of the coronation of George V. (Monroe's next movie would be the ultra-wonderful SOME LIKE IT HOT.)

The film is based on a book by Colin Clark, at the time a sort of eager, impressionable dogsbody (third assistant director) for Olivier's production company. He is played in the film, smartly and un-objectionably, by Eddie Redmayne. Because of his obvious star-struck sympathetic nature, his naivete, he easily becomes the someone Monroe turns to when she can't handle the pressure of working with Olivier.

Even if Clark exaggerates the relationship,  it still makes for a good story. Marilyn is shown to be a very talented but troubled young woman who travels with her own acting coach and entourage who apparently think nothing of giving her drugs to keep her contained. (At least in this movie.)

Monroe appears intimidated by everything on the set, most especially Olivier and Dame Sybil Thorndyke (played quite splendidly by Judy Dench in a very small role). She has to be told over and over again that she is, indeed, talented - her self-esteem needs major overhauling on a daily basis. Apparently she was a very needy person, obsessively so. 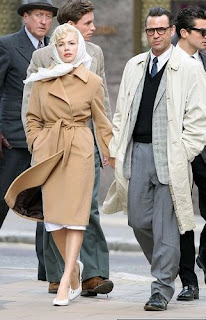 It's this neediness that ruins her short-lived marriage to playwright Arthur Miller (played very well by Dougray Scott) who ups and leaves during the middle of filming, claiming he can't work, can't think. Monroe wants him to solve all her problems - an impossible task.

Actually, in this pix, Branagh sort of looks like Olivier.

Branagh recognizes just how talented Monroe is (everyone does, really - except MM herself) but he is enormously frustrated by the constant delays in filming. He is a professional actor and can't quite understand the rudiments of 'method acting' as Marilyn insists on finding the 'center' of her character before she can work. "Can't you just be sexy?" he asks her, mid-tirade. This, of course, sends her running back to her dressing room.

Michelle Williams portrays Marilyn as a wounded bird who is incapable of self-healing. But I never got the sense that she 'was' Monroe, that she wasn't just a wonderful actress playing Monroe. (Though in the end she gives a sultry,very-Monroe-like, knock-out performance of the song, That Old Black Magic.)

Monroe's inability to function without having her ego, her sense of self, 'massaged' grows old very quickly. In order for her to walk on set for even a few moments of filming, she must calm her fears (which were obviously quite real to her), deal with her own personal demons, then be led almost blindly on set to perform magic on film.

If this portrayal is anywhere near accurate, Monroe was too damaged a human being to handle what fame brought her. In some obtuse way, she thrived on the hullabaloo. Though she poses prettily enough for her public when she needs to, one wonders just how much of it was allowed to touch her - IF it touched her at all. If she fed on public adulation, it wasn't a very nourishing diet.

In the end of the film, Olivier sums up Marilyn as 'desperately unhappy'. But I was left wondering what it was that had made her so, wishing I didn't feel so annoyed by her behavior. Honestly, I felt for Olivier.

The film has many well-known  actors with very little to do so they must make the most of their limited screen time (and they do). Besides Judy Dench, there's Zoe Wanamaker, Toby Jones, the wonderful Michael Kitchen, Julia Ormond as Vivien Leigh, Philip Jackson and Emma Watson.

(An aside: Watson really is an uninteresting screen presence. But for HARRY POTTER, I wonder where she'd be. Just a thought. Maybe I'll see her in something else and she'll change my mind.)


All the photos used in this post were culled from various online sources. They are meant strictly for entertainment and/or educational purposes. No copyright infringement is intended.
Posted by Yvette at 1:38 PM