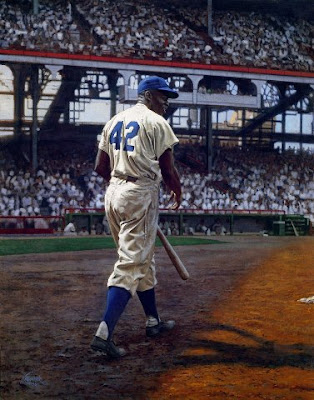 Jackie Robinson was the first African American to play in major league baseball and died on this day forty years ago. He was gone too soon but what he left behind was the story of a life well lived as a human being, a gentleman and a ball player par excellence. (We should all be so fortunate.) The story of Robinson's life and legacy ought to be required teaching at every school in America.

"A life is not important except in the impact it has on other lives."  Jackie Robinson

"He knew he had to do well. He knew that the future of blacks in baseball depended on it. The pressure was enormous, overwhelming, and unbearable at times. I don't know how he held up. I know I never could have." -Duke Snider

"Thinking about the things that happened, I don't know any other ball player who could have done what he did. To be able to hit with everybody yelling at him. He had to block all that out, block out everything but this ball that is coming in at a hundred miles an hour. To do what he did has got to be the most tremendous thing I've ever seen in sports." - Shortstop Pee Wee Reese

"I don't care if the guy is yellow or black, or if he has stripes like a fucking zebra. I'm the manager of this team and I say he plays." - Leo Durocher

The wonderful painting of Jackie Robinson is by contemporary artist Graig Kreindler - Use the link to see more of his work and learn about his talent.
Posted by Yvette at 12:20 PM