Tuesday's Forgotten (or Overlooked) Film: THE TIME OF THEIR LIVES starring Bud Abbott and Lou Costello 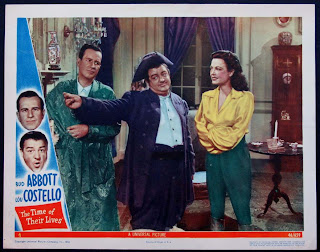 Since it's Tuesday again, you know we'll be talking about forgotten (or overlooked) films and/or other audio visual material - the weekly meme hosted by Todd Mason over at his blog, Sweet Freedom. So don't forget to check in at link central to see what everyone's posted.

Bud Abbott and Lou Costello made several wonderful films in their long-lived movie/television careers including the classic ABBOTT AND COSTELLO MEET FRANKENSTEIN which remains one of my very favorite films of all time.

But we're here today to talk about something else by the lunatic pair, the less well-known 1946 film, THE TIME OF THEIR LIVES directed by Charles Barton, which, in many ways, remains one of Abbott and Costello's more atypical offerings. And wonder of wonders, Costello doesn't get slapped around by Abbott as was their usual shtick.

The humor is a bit subtler too. Well, subtle as far as Abbott and Costello goes. Though it's a funny film, it's not raucous funny nor, I think, was it meant to be. According to Wikipedia, Costello and Abbott were on the outs and taking a break from each other, hence the decision not to play the usual put-upon partners in hilarity, but two separate characters with separate lives (or non-lives). 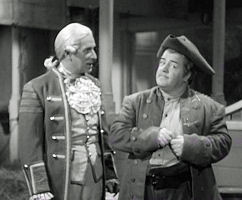 Lou Costello plays Horatio Primm, a 1780 tinker who dies in the first part of the story set way back when, and spends the rest of film as a ghost. Dead along with him is Melody Allen (Marjorie Reynolds) - branded as traitors, their bodies have been thrown down a well and left to rot. Doesn't sound at all like a bundle of laughs, but stay with me. 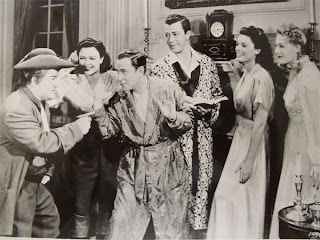 In the movie Abbott and Costello actually appear together in only one scene early on. This must be a publicity still.

Move 165 years ahead and the odd couple materialize as see-through apparitions bent on retrieving a letter written by George Washington which would prove their innocence and allow them to leave the Greenway estate which they are condemned to roam and, what's more, head on up to the pearly gates. Phew! 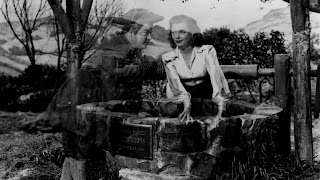 Why did they wait so many years? Well, turns out that the original letter (hidden inside a clock) was part of a cache which soldiers on horseback appropriated way back when. They also burned down the original Greenway mansion as part of their revolution festivities. The only way to find the letter is to find the clock.

The modern-times Greenway mansion has been re-built by a rather stiff-necked Waspish descendant - psychiatrist Dr. Ralph Greenway (Bud Abbott in a straight acting role)  - with most of the original  furnishings restored. Except for the clock that is, which is currently up for auction in town. (Unknown to the two ghosts AND the psychiatrist and his friends.)

Since the house has been restored to its pre-Revolutionary days glamour, Horatio and Melody think they'll find the letter still in its hiding place. 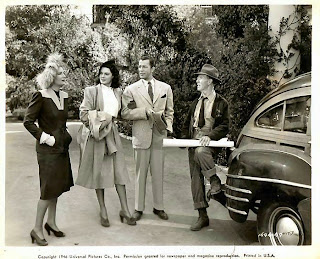 When Greenway arrives to show off the house to his wise-cracking friends (of which Binnie Barnes gets the best lines) they are met by Gale Sondergaard - the eternal sinister housekeeper. (Think, REBECCA.) 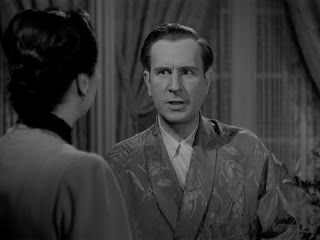 Ghostly shenanigans ensue as Horatio and Melody do their best to search the house. The sinister housekeeper, of course, senses their presence though Greenway and his friends poo-poo the idea of 'ghosts'.

It's all nonsense and a lot of fun. In fact, this remains one of my favorite Abbott and Costello movies precisely because their usual heavy-handed routines are missing. This film is more about the story (which is an engaging one) and eventual outcome, rather than the two loony-toonys themselves. A good film for this time of year, I'm thinking. 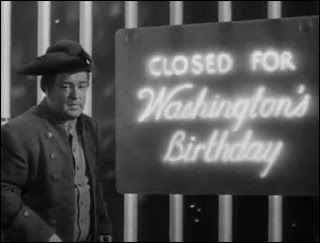 Email ThisBlogThis!Share to TwitterShare to FacebookShare to Pinterest
Labels: Abbott and Costello, Movies, The Time Of Their Lives