If it's Tuesday, then Forgotten Films (and other assorted Audio/Visuals) are on the menu once again. Don't forget to check in at Todd Mason's blog, Sweet Freedom, to see what other forgotten or overlooked films other movie mavens will be talking about today.

Since it's only two weeks until Halloween, I'll be concentrating on mysteries and/or horror films (light on the horror, though - I'm not a huge fan) for the time being. Beginning today with a dandy - a long ago film that was once considered 'lost'.

THE SECRET OF THE BLUE ROOM (1933) is a film directed by Kurt Neumann and starring, among lesser known others, Lionel Atwill, Gloria Stuart and Edward Arnold. This is not a great movie, far from it, and not really a 'horror' film at all - though it is occasionally classified as such. It's one of those locked room B movie mysteries that studios used to delight in churning out - thank goodness.

If you're a Lionel Atwill fan like me, you'll enjoy his playing against type. He really did have a great screen presence - I liked him in just about anything. Gloria Stuart you know from playing the elderly lady who ditches the jewels in TITANIC. Here she is young and beautiful and gets to sing a love song at the piano in a room full of several men lusting after her. Very daring, I'd have thought. But also rather like dangling cheese in front of a bunch of hungry mice. But I'll say no more lest I give the denouement away.

This is just the kind of creepy little movie for a rainy Autumn night when all you want to do is put your feet up, have a nice cup of tea and not think too much. When you don't want to watch anything too exhausting or exacting but you're still in the mood for a vintage mystery, movies like THE SECRET OF THE BLUE ROOM fit the bill nicely. 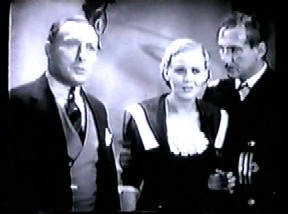 The setting is an old mansion/castle/whatnot owned by Richard von Helldorf (Lionel Atwill), a rich man with a mysterious past, whose daughter Irene (Gloria Stuart) is celebrating a birthday - her twentieth, I think. Celebrating with Irene and her father are three men who are in love with her. In fact, in the middle of the 'party' she gets an intense proposal from one of them. But Irene's not having any. Apparently, she'd rather dangle the three on a string though she is not a coquette by any means. Just a young woman at the height of her girlish powers about to get a lesson in the harsh realities of movie life.

One of the men, Captain Walter Brink (Paul Lukas in his younger and more dashing mode) appears to be the favorite, but we only learn that as the film progresses.

Okay, so the group settles in for after dinner drinks and Von Helldorf is cajoled into telling a mystery story. The tale concerns dastardly doings in the castle's Blue Room which is now and forever kept locked. Uh-oh.

It seems that twenty years before, Von Helldorf's sister inexplicably flung herself from the room's window into the moat below. After that, a young man died in the same room and AFTER that a detective hired to solve the mystery spend the night in the Blue Room and was found shot to death. No gun ever found.

All three events happened at the stroke of one o'clock in the morning. From then on to this day, the room has been kept locked and apparently the sinister butler, Paul, has the only key.

Okay, you know what happens next.

One by one, the men at the birthday celebration decide they will spend a night in the Blue Room to prove their courage to the young and beautiful Irene.

One disappears, one is shot and one...well, you'll have to see the movie to find out what happens. None of it really makes much sense and the resolution should have been apparent to anyone with any ounce of brains, but it still makes for a creepy, sinister story worthy of a Halloween night.

Oh, and Edward Arnold makes his appearance about half way through the movie as the local police investigator, called here the Commissioner and addressed as Mr. Commissioner. He's a friend of Captain Brink's and arrives at his request to try and solve the crimes.

Of course, Lionel Atwill lurks about just for diversion's sake and there are mysterious comings and goings which add to the general ominous atmosphere.

As I said earlier, a dandy movie for a rainy autumn night.

You will be pleased to know that youtube currently has the movie on view for free. (AVOID the comments section which spoils the surprise ending.)

P.S. The opening credits make use of Tchaikovsky's music from Swan Lake apropos of nothing but the fact that they probably had no money to spend on original music and/or that back then, music was not considered all that important in the unveiling of a story. (Though there are two swans in the castle's moat and maybe that brought to mind...ah, who knows?) 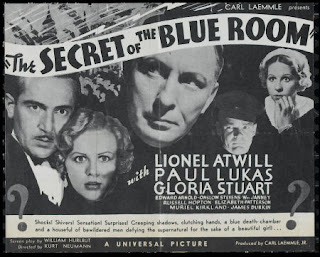