A Rant: I'm Sorry But I Can't Take it Anymore! 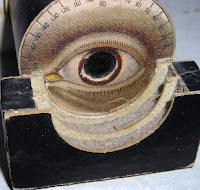 How? Well, by eliminating that 'wordy identification' thing that Google Blogger invented to make everyone insane. I read your complaints and I responded - you've probably noticed that I've gone to comment approval status for a couple of weeks now. BUT, here's the truth of it:  I HATE IT!!! Apparently I don't have the patience. I admire bloggers with the patience to deal with it, but I'm not one of them.

I could live with it if only I weren't constantly being BOMBARDED with emails of the most spurious sort. I mean, some of it is kind of creepy and I know it's being sent by machines who could care less about my creep intolerance, but ladies and gents, I don't like being annoyed. Not even a little bit. I especially don't like being annoyed by things that make NO SENSE - half the spam mail is unreadable so I'm assuming it's in some sort of binary code. HA! WHAT AM I SUPPOSED TO DO WITH THIS? Am I seriously supposed to respond? Well, I did get one that - very politely - said the sender was really disappointed with my blog and shouldn't I do something about it. I rolled my eyes and deleted.

I know Google blocks the spam from actually reaching the blog - thank goodness - but I hate that my mail is constantly clogged with this crap.

The viagra ones, especially, bother the heck out of me because the damned machines (or whatever you call spam program/computer/what-nots) don't even know that I'm NOT SOME OLD GEEZER with locomotion problems!

See, here's the thing: SPAM MAKES NO LOGICAL SENSE. It's not at all like advertising flyers being sent to the house - flyers can be useful for wrapping fish or for tearing into bits and making alternative reality jewelry. But what on earth is the use of spam online??? WHAT IS THE POINT???

Are there people who actually interact with spam?

Anyway, long story short: I apologize to those of you who have trouble with the 'wordy identification' thing but for my own peace of mind, I am going back to it. Even though my daughter says people won't leave a comment if they have to deal with that kind of stuff from the comfort of their i-phones.

I'm sorry for that because your comments mean a lot to me. I so enjoy interacting with you guys and I like to think the enjoyment is mutual. But if it becomes too awkward for you to post a comment, I will understand if you decline to do so.

But I hope you won't.

Am I the only one with Spam Intolerance Syndrome? How do you guys handle it all?
Posted by Yvette at 3:35 PM