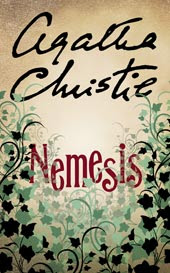 Tuesday's Overlooked (or Forgotten) Films is a weekly meme hosted by Todd Mason at his blog, SWEET FREEDOM. Don't forget to check in and see what other overlooked films other bloggers are talking about today. Link. 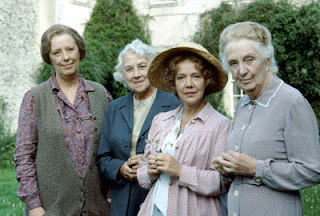 Okay, yeah, NEMESIS is technically not a movie, but you can watch it as such on Netflix streaming, if you like. And I like. This is one of my favorite Joan Hickson aka Miss Marple adaptations primarily because it (more or less) follows the book's plot, fleshing out the story visually and adding another character while removing a couple and rearranging a few events, but all to the better in this case. The adaptation was done by novelist T.R. Bowen so maybe that's why it worked so well and directed beautifully by David Tucker.

An addition I liked: Miss Marple's sad-sack nephew, Lionel (Peter Tilbury) whose wife has recently changed all the locks on their house to keep him out, has come to visit.. He arrives in St. Mary Mead, bags packed, looking for a temporary place to stay.

Instead he gets to accompany Miss Marple on a journey into the past to discover the truth of a murder which occurred some years before. Miss Marple is the 'nemesis' of the title, an appellation given to her by the late Jason.Rafiel, an elderly, self-made multi-millionaire who once helped Miss Marple prevent a murder while on holiday in the Caribbean (see A CARIBBEAN MYSTERY).

He has recently died and left Miss Marple a sum of money, but also instructions in his will for her to take a bus trip. On this trip she, unbeknown to her, will be joined by several characters who are there to keep an eye on her as well as to serve as guides to the truth of the murder of a girl named Verity Hunt years before. Whether they know they are 'guides' isn't made clear, especially since one of them turns up dead, but no matter.

Miss Marple complies with Rafiel's request out of respect for his acumen and also because she is intrigued by the vagueness of it all. She will, in any case, inherit the money whether she is successful in her quest or not. 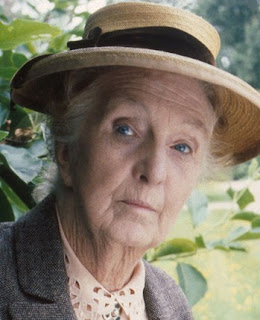 The lawyers, Broadribb and Schuster are played by two veteran character actors who know just how to do this sort of thing perfectly, they are adorable: Roger Hammond and Patrick Godfrey. I love their scenes together, with Miss Marple and later with Rafiel's son, Michael.

It is this son, Michael, who had been accused of Verity Hunt's murder but was never brought to trial. The son has since refused his inheritance and become a homeless vagabond, leaving the Rafiel family mansion sitting empty and decaying. (Decay is very much a part of the plot, perhaps because this was the last Jane Marple mystery written by Agatha Christie, though it was not the last published.)

As part of Mr. Rafiel's bequest, Miss Marple joins a Houses and Gardens of England bus tour. True to form, she soon realizes that several of the passengers on the bus are concerned in her mysterious quest and begins putting two and two together realizing too that she is being guided from the grave - in a manner of speaking - by Mr. Rafiel.


NEMESIS is about the reach of memory and the power of love to destroy. But most of all, it is about justice.

What I like most about this particular version (besides all the wonderful performances) is the gorgeous scenery and architecture, the all around English country ambiance which the film-makers made such good use of. Not to mention the beautiful vintage green and yellow (if I'm remembering correctly) bus.

The art direction on this particular Miss Marple film is absolutely top notch. This is the England we all imagine when we think of visiting. Even down to the cozy tea shop in which several characters stop to have tea and pertinent conversation. The English countryside has never looked so invitingly atmospheric -  lovely, green and flowering.

Too bad murder and madness must rear their ugly heads later in the story.

P.S. Don't, whatever you do, watch the newer version of NEMESIS starring the badly miscast Geraldine McEwan as Miss Marple. The story was twisted around and peopled with ridiculous characters and not very clever actors. This adaptation was simply a dreadful mistake which probably had Agatha Christie spinning in her grave.


In my view, no one can ever equal Joan Hickson's portrayal of Miss Marple and the brilliant adaptations of Christie's work done for PBS in the 1980's.
Posted by Yvette at 11:03 AM