The Worst Film Casting Upset of This or Any Other Year. 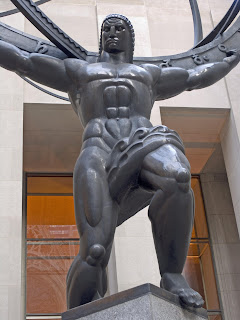 Atlas sculpture at Rockefeller Center by Lee Lawrie.
This is kind of how I view Jack Reacher in the series of books by Lee Child.
**********************
Okay, so we're dishing about Vince Vaughn playing Jim Rockford and have decided that maybe it's not the best idea in the world. Though I initially didn't think it was actually THAT awful I've decided to revise my thinking.

But this latest casting 'coup d'etat' is nothing compared to what I consider to be the worst casting decision in the history of mankind: Tom Cruise to play Jack Reacher in ONE SHOT from the book of the same name by Lee Child.

HUH??!!! Please someone explain to me in what universe this makes the teensiest, weensiest iota of sense?!

Jack Reacher is a muscular, 6'5" ex-Army M.P., a man whose mere size serves to intimidate. (Plus he has a buzz cut and his hair on close inspection is sort of blondish.)

Tom Cruise is the antithesis of Reacher. He is, shall we say, on the diminutive side. (I'm being kind.) Just how does this guy intimidate anyone? What, are they going to have him standing on a box for the whole movie? 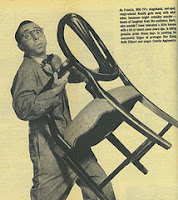 With apologies to Arnold Stang, this is how I see Tom Cruise as Jack Reacher.
Truth be told, I'd rather see Vince Vaughn as Reacher.
Posted by Yvette at 4:32 PM