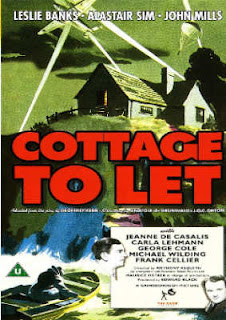 COTTAGE TO LET (1941) is an obscure, but terrific little movie (based on a play) and directed by Anthony Asquith. It's a perfect entry for Overlooked (or Forgotten) Film day, the weekly meme hosted by Todd Mason. Don't forget to check out Todd's blog, SWEET FREEDOM, to see what other films other bloggers will be talking about today.

The one drawback to COTTAGE TO LET is the film's silly title which had actually kept me from watching it until very recently. COTTAGE TO LET - does that sound like a nifty spy movie? Of course not. But doubts aside, it is exactly that.

The more suspicious among us can probably figure out early who the Nazi infiltrator is, but on the whole, the thing is really handled very well. The cast of British stalwarts is exceptional.

John Barrington (Leslie Banks) is an eccentric inventor (is there any other kind?) working on a new bomb sight which will help the British war effort. He prefers to work on his isolated Scottish estate without the interference of guards or other official types which might hinder his thought processes.

Barrington works with the help of lab assistant Alan Trent (played by Michael Wilding) a kind of hapless, eyeglass wearing doofus, who happens to be in love with Barrington's daughter Helen (Carla Lehman) though that doesn't stop him from acting suspiciously around the lab. 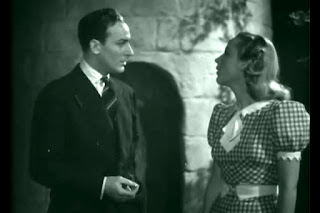 That's the fun of this film, most everyone behaves suspiciously and it's hard to know who to trust until almost the very end.

The 'cottage to let' of the title turns out to be a very busy place right next door to the main house in which Barrington has his laboratory. Mrs. Barrington, (Jeanne De Casalis) is the ditzy, dithery sort - in her own way as eccentric as her husband. She has agreed to turn the cottage into some sort of  evacuee refuge or war hospital even though it has been promised to a certain Mr. Charles Dimble (Alastair Sim) who explains to the flustered Mrs. Barrington that he has, after all, paid his rent in advance. The Brits are such experts at this cozy-spy-mystery sort of thing - they've turned it into a separate movie art form. 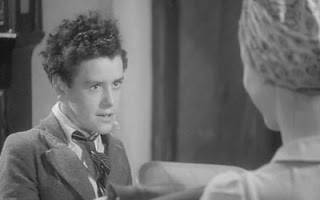 George Cole playing the evacuee, Ronald, a kid from the London streets.

The mix-up isn't helped by the addition of Ronald a young London evacuee (the delightful George Cole in his first movie) with street smarts who is determined to get in everyone's way especially once he's moved up to the big house to make room at the cottage for a downed RAF pilot, Flt. Lieut. Perry (John Mills) who has been fished out of a Loch and must share the cottage (while convalescing) with the obsequious and rather creepy Mr. Dimble. So at the beginning of the film, it's a kind of jumble until the characters sort themselves out. . 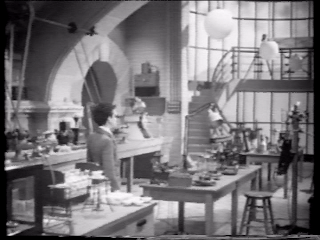 The infamous laboratory. Notice that the kid had no trouble getting in.

For a man working on a secret bomb sight, Barrington has little or no security though we learn early on that the butler is really a London copper sent in by Scotland Yard without Barrington's knowledge.

In the meantime, there's a fete planned to take place on the grounds and inside the house (I know, it's all too preposterous but so very English) to raise money for the war effort and London officials are rightly concerned that the setup at Barrington's estate is sounding less and less likely to work out well.

Soon there are spies passing messages and meeting in out of the way places and a suspicious looking piano tuner (!?) working inside the house only a few steps from the laboratory. 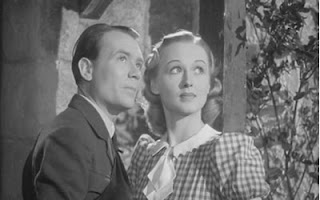 Before you know it, there's a marriage proposal, several characters are coshed on the head and spirited away to an abandoned mill and we get to the end of the film amid lots of gunfire and dead bodies. Needless to say, the Nazi spies are vanquished once again and a lovely time was had by all.
Posted by Yvette at 11:22 AM