A Bit of Agatha Christie On A Beautiful Sunny Day in April. 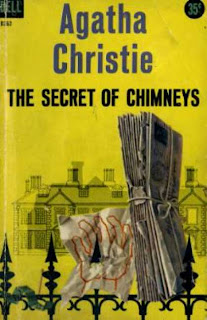 One of many reasons why I adore Dame Agatha's writing:

(The following is an interlude between dead bodies at the English Country estate of Lord Caterham where a body with a bullet in it has just been discovered by a maid. The police are on the scene, Lord Caterham plans on leaving all the details in their hands as well as in those of George Lomax (known as Codders), a government toady who is on his way over from a neighboring estate. The dead man was an important and very hush-hush dignitary.)

"Well," said Lord Caterham, eager to escape, "I'll leave you here, Inspector. You'll be able to find me if you - er - want me. But Mr. George Lomax is coming over from Wyvern Abbey shortly, and he'll be able to tell you far more than I could. It's his business really. I can't explain, but he will when he comes."


Lord Caterham beat a precipitate retreat without waiting for a reply. "Too bad for Lomax," he complained. "Letting me in for this. What's the matter, Tredwell?"


The white-haired butler was hovering deferentially at his elbow. "I have taken the liberty, my lord, of advancing the breakfast hour as far as you are concerned. Everything is ready in the dining room."


"I don't suppose for a minute I can eat anything," said Lord Caterham gloomily, turning his footsteps in that direction. "Not for a moment."


Bundle [Caterham's daughter] slipped her hand through his arm, and they entered the dining room together. On the sideboard were half a score of heavy silver dishes, ingeniously kept hot by patent arrangements.


"Omelet," said Lord Caterham, lifting each lid in turn. "Eggs and bacon, kidneys, deviled bird, haddock, cold ham, cold pheasant. I don't like any of these things, Tredwell. Ask the cook to pouch me an egg, will you?"


Tredwell withdrew. Lord Caterham, in an absent-minded fashion, helped himself plentifully to kidneys and bacon, poured himself out a cup of coffee, and sat down at the long table. Bundle was already busy with a plateful of eggs and bacon.


"I'm damned hungry," said Bundle with her mouth full. "It must be the excitement."


"It's all very well for you," complained her father. "You young people like excitement. But I'm in a very delicate state of health. Avoid all worry, that's what Sir Abner Willis said - avoid all worry. So easy for a man sitting his consulting room in Harley Street to say that. How can I avoid worry when that ass Lomax lands me with a thing like this?..."


With a sad shake of the head, Lord Caterham rose and carved himself a plate of ham.


"Codders has certainly done it this time," observed Bundle cheerfully. "He was almost incoherent over the telephone. He'll be here in a minute or two spluttering nineteen to the dozen about discretion and hushing it up."


Lord Caterham groaned at the prospect. "Was he up?" he asked.


"He told me," replied Bundle, "that he had been up and dictating letters and memoranda ever since seven o'clock."


"Proud of it, too," remarked her father. "Extraordinarily selfish, these public men. They make their wretched secretaries get up at the most unearthly hours in order to dictate rubbish to them. If a law was passed compelling them to stop in bed until eleven, what a benefit it would be to the nation! I wouldn't mind so much if they didn't talk such balderdash. Lomax is always talking to me of my 'position.' As if I had any. Who wants to be a peer nowadays?"


"Nobody," said Bundle. "They'd much rather keep a prosperous public house."


Tredwell reappeared silently with two poached eggs in a little silver dish which he placed on the table in front of Lord Caterham. "What's that, Tredwell?" said the latter, looking at them with faint distaste.


"I hate poached eggs," said Lord Caterham peevishly. "They're so insipid. I don't like to look at them even. Take them away, will you Tredwell?"


"Very good, my lord." Tredwell and the poached eggs withdrew as silently as they had come.


The book was published in 1925, only Christie's sixth mystery. But I don't even mind the adverbs. I am in love with Lord Caterham. He is one of the few men in literature that I would willingly marry. Ha!


I've lost track of how many times I've read THE SECRET OF CHIMNEYS, but I suspect I'm not done yet.
Posted by Yvette at 11:11 AM