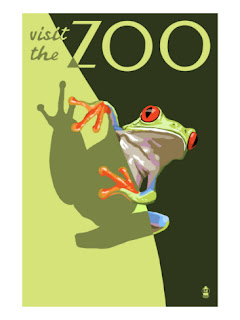 source
Today, something a little different. Patti Abbott at her blog, PATTINASE issued a writing challenge a few weeks ago and I signed up.The idea was a short story (around 1500 words) having something, anything to do with a zoo. At first it was the setting, but then it sort of evolved.

I hope you'll enjoy my post (it's just a bit of nonsense) and when you're finished, you'll check in at Patti's and read her story and pick up the links to other participating bloggers. What would life be without a challenge here and there? Not as much fun, that's for sure.


*******************************
Down to the Zoo and Back Again
I turned aside from the intense focus of the one glaring blue eye. Smith’s voice, a low, raspy metallic whisper defied anyone to interrupt him even when expecting an answer in reply – you never knew whether to speak or pretend you were invisible. (There were a couple in the group who were – lucky for them – truly invisible and so escaped the wrath of Smith, one eye blazing like a petulant Cyclops.) I don’t know what he expected from those of us operating on no sleep, no food and no chlorophyll.
Smith fixed the crick in his long neck, making a loud snapping noise. I mumbled something.
“What? WHAT? I didn’t hear that. No, wait. Something tells me I need to sit down for this.” He grabbed a metal stool from beneath one of the lab desks and pulled it over, a tentacle making that slithery hissing noise that never failed to unnerve me no matter how many times I’d seen or heard it slide out from beneath Smith’s long plaid woolen coat. (Plaid was Smith’s passion.)
“As you can see, I’m now sitting.” Smith sat, balanced precariously. (He was rather pear shaped with only three long appendages, two purple, one green.) “Tell me again how you managed to foul up the simplest of inter-world exercises. How you managed, somehow, even with the expensive education your guardians have paid for and believe me this will be on their monthly bill – have no doubt –  pray tell me how you managed to screw it all up!. Do you know how much a go-back-and-retrieve operation will cost? We are NOT MEANT TO INTERFERE in any way! ” His voice climbed so high the two antennae on my forehead drooped and fell asleep. They did that a lot whenever Smith was in a mood.
I mumbled again.
“What? Speak coherently!”
“We left him at the zoo,” I said, clearing my throat. “ In the reptile house. We had no choice.”
Smith’s eye swiveled around the room. “Oh well, that makes all the difference – why didn’t you say so to begin with? So, at this point in actual time, Colonel Zyph, disguised as a lizard, is playing hide and seek with a bunch of frogs and turtles?  Well now – “ Smith did his best to shrug which was kind of difficult because he had no shoulders to speak of – “ I can see how that could happen. Yes.”
“Really?” I said hopefully.
“Ah, the gullibility of youth…” Smith shook his head.
I stretched to my full height. I could make 3 feet, if I really pushed it. “ It wasn’t my idea to visit the zoo, sir. Technically, the Colonel was in charge.”
"Ah, I was only following orders. The standard excuse for simpletons since time immemorial." He waved a purple tentacle around. "Repeat after me, everyone, all together now, I VAS ONLY FOLLOWING ORDERS!”
When no one in the room said anything, he screamed, “I can’t hear YOU!” and fell backwards off the stool. His blinking blue eye glared wildly at us, defied us to rush to his aid. Only the two (or maybe three) invisibles dared giggle.
“Ernie!!!” Smith howled. A tall, stringy fellow with spotted skin and spiky yellow hair  scrambled in from the next room and after much tsk, tsk, tsking, helped Smith back up to his sitting position. None of us were allowed to touch Smith, he disliked the feel of  pinchers. With a rancid glare in our general direction, Ernie escaped back into his lab.
“Tell me again about this zoo." Smith puckered his lips with distaste." Particulars please, the computer awaits. Zoo. I don't like the word. It has such an inelegant sound. English is so tiresome."
“I think the full term is ,” I said. “It’s where earthers store their animal life. None left in the wild these days.”
“What?”
“The Zoo, sir. You said…”
“I know what I said. Do you take me for a simpleton? I know what a zoo is. I also know the root of the word and more. Don’t you know by now that I know everything? I was merely musing…”
“Yessir.”
“Revelations, please.”
“The Colonel said he wanted to take a look. That’s all. He, well, you know what shape-shifters are, when he saw the lizard, honestly sir, she had the most beautiful red and black stripes…” my voice trailed off.
Smith cleared his throat loudly.
“Yessir, sorry sir. I was just musing.”
Smith glared.
“The Colonel was instantly smitten. Before we could stop him, he’d effected a rearrangement, jumped in the tank and was whispering sweet nothings into the ears of what turned out to be, on closer inspection – “ I glanced down at my e-band, “…a Oustalet’s Chameleon, native of .”
“Zyph is such a raging romantic,” said Smith.
“We though we’d let true love run its course and we could go back and retrieve him in a few minutes.”
"Do you know what I’m doing now, Merrivale?”
“No sir.”
“I am doing a remarkable imitation of someone trying to stay calm. Trying to take into account your callow youth and inexperience. “


“It was the Colonel, sir. The Colonel was beguiled. He – I couldn’t stop him.”
Smith made such a dreadful face that even the monkey, Linus, looked near to fainting.
“What is wrong with that creature?”
“You’re frightening him, sir.”
Smith looked uneasy for the first and only time that morning. He loved monkeys.
He made an attempt to look less threatening. “And the portal?"
“It worked a treat, just as you thought it would.” I smiled. After all, the portal was Smith’s life’s work. “Everything was going fine. Since we were always ten minutes ahead of the earthers, they couldn’t focus on us. We moved among them easily, picked up plenty of samples - hair, sweat, a fingernail or two. A kitten.”
Smith looked horrified.
“No, well, for whatever reason the portal wouldn’t take the kitten. We had to put it back.”
Smith breathed a sigh of relief. “Good, good, that much is very good.” He attempted a sort of encouraging smile no less frightening than his scowl.
“But then,” I said,” the Colonel saw the zoo gates and wanted to investigate.”
“He would.” Smith rolled his eye.


“He said something about freeing all the poor oppressed creatures within. You know how he talks. But then, in the reptile house, he spotted the chameleon and began to vibrate and the rest you know.”
“Say no more.” Smith grimaced and closed his eye. He rolled his head side to side and again had to snap his neck. The one tentacle he used for balance gripped the edge of the table and he fought to keep from falling over again. He looked up at the ceiling as if pondering a great problem, which he probably was. Disregarding his awful clumsiness and lack of manners, Smith was purebred, undiluted genius.
“We couldn’t stop him, sir. He, well, you know how the Colonel loves music. The zoo was playing Brahms over the sound system. He was overcome, sir. There was nothing we could do.”
“You do realize we have no choice but to go back for him” said Smith, taking a deep breath.
“I’m volunteering, sir. We all are.” I heard some protesting squeaks from the back of the room, but ignored them.
“Much good that will do. “ Smith managed a half shrug. ‘’You look done in, Merrivale” he said, looking down at me with that great blue eye, his neck extended. “Go get something to eat, the kitchen has a fresh supply of moss, get a chlorophyll shot, comb those ridges on your head, do something to make yourself presentable. Come back in a couple of hours. You and these other idiots here will have to dare the portal again. Take a couple of extra invisibles. The portal wasn’t meant to be used back to back – it seems to resent that -  but we don’t have any choice.”
“You would have been proud, sir. Once the portal sensed danger, it was suddenly right there and waiting. We all went through, but the Colonel wouldn’t leave his friend and the portal didn’t recognize his new shape. We shouted for him to change back but he ignored us. Honestly Mr. Smith, I don’t think he could hear, he was all peculiar and turning colors. Do you think the Colonel will be safe until we can get back?”
“How the hell should I know? Probably not. Don’t female chameleons eat the male after mating?”
I know I looked horrified, but he said quickly, “That was a joke, Merrivale. We’ll get him back, not to worry.”
“Does that mean you’re thinking of going, sir?” I tried to keep dismay out of my voice.
“Oh dear boy, I wouldn’t miss this for the world,” said Smith.
Posted by Yvette at 10:00 AM

Email ThisBlogThis!Share to TwitterShare to FacebookShare to Pinterest
Labels: Down To the Zoo and Back Again, Flash Fiction Challenge