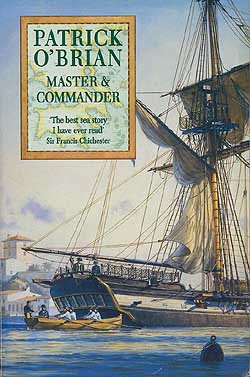 Well, I'm hooked. I'd heard about O'Brian's books for years and never thought they were for me - they sounded like the sort of thing men enjoyed and women sniffed at. But I was wrong. When will I learn?

First of all, I love a good adventure story. I love tales of derring-do. I am an Anglophile. I loved the movie MASTER AND COMMANDER with Russell Crowe and Paul Bettany as O'Brian's peripatetic duo, the very British, Captain Jack Aubrey and the Irishman, Dr. Stephen Maturin. (Probably the movie is the reason why I decided to read the book in the first place.)

So all these ducks in a row, I decided to read the first book in the long-running series, MASTER AND COMMANDER (which, by the way, is a totally different story - except for a couple of elements - than the movie). What's the worst that could happen? I wouldn't like it and I'd move on to something else.

Needless to say, that didn't happen. The book is quite remarkable. I loved it and immediately ordered the next two in the series, POST CAPTAIN and H.M.S. SURPRISE.  (Found two nice used trade paperbacks.)

We're back in the 19th century, Napoleon is hovering over Europe and we're sailing the seven seas looking for adventure and whatever comes our way.

Now I don't know a mizzen topgallant from a flying jib, but that didn't stop my enjoyment of the story. Most of the books come with a diagram of a 19th century sailing ship, so if you really want to, you can figure out what sail is which and spend time deciphering Captain's orders and the sailor's jargon. Half the time when action was under way with  incomprehensible orders flying about, it didn't really seem to matter whether I understood the lingo or not. I just used my imagination.

Patrick O'Brian (born Richard Patrick Russ) was an incredibly gifted writer, superb not only in the action sequences, but more importantly in quieter times when the day to day travails of 19th century seamanship are revealed. He is particularly good at establishing the friendship of Aubrey and Maturin, two very different men. Maturin knowing little of sailing life and Aubrey devoted to that very life - his main desire: being made Post Captain which is a higher level of command than Master and Commander. (Though Master and Commander sounds much more impressive to me.

In his forward to the book, Patrick O'Brian comments: When one is writing about the Royal Navy of the eighteenth and early nineteenth centuries it is difficult to avoid understatement; it is difficult to do full justice to one's subject; for so very often the improbable reality outruns fiction.

War with Spain and France was on-going and any Spanish or French ship on the horizon was potential for capturing a prize and enriching the Captain's pocket, not to mention the common seamen on board. This was ship to ship battle, man to man, eyeball to eyeball, musket to musket, pick-ax to sword. It was all about cunning and valor, brilliance and stupidity, and very often institutionalized cruelty. But at the root of it all, honor among honorable men saved the day, not to mention, accompanying good manners and a definite sang froid which I am convinced, only men can achieve.

In this first book we are aboard His Majesty's sloop Sophie, recently (and unexpectedly) given over to Captain's Aubrey's command. Though it's not a huge 36 gun frigate, it will do quite nicely enough and Captain Jack soon racks up several prizes and earns the nickname, "Lucky Jack" Aubrey.

Still, that doesn't protect him from his enemies on land, especially one Captain Harte whose wife just happens to be Jack's mistress. Oh well, all is fair and love and war and the funny thing is no one thinks any the less of Aubrey for taking up with a married woman, though the woman isn't looked at with the same equanimity.

While on board ship the friendship between Aubrey and Maturin deepens as the good doctor must learn to accommodate himself to the harsh shipboard realities, a reality which the sailors (many of them 'pressed' men, several Africans among them) seem to take in their stride -  floggings to deter all manner of bad behavior including drunkenness which wasn't helped much by the daily measure of rum handed out to every man.

I did enjoy learning about the subtleties of leadership, i.e. what makes a good captain, what ill-bred, ill-used, uneducated men will and won't respect and just how chancy were the lives of 19th century sailors and their leaders. Also discovered that a man could be hung for buggering a goat. Chancy, indeed.

Learning that many ships never even carried a doctor on board was mind-boggling. Not that 'doctoring' was any great shakes at this point in history, what with 'bleedings' still regularly carried out as a 'preventitive' or cure-all. Though Dr. Maturin does have enough skill to operate on a man with an ugly head wound and bring back a boy thought dead by drowning.

But on the whole, life on the high seas then was all very hit or miss - the only thing holding everything together, I'm convinced, was strict adherence to naval law and the common goal of defeating Napoleon.

England did expect every man to do his duty and most of them did.

A fabulous book.
Posted by Yvette at 2:15 PM