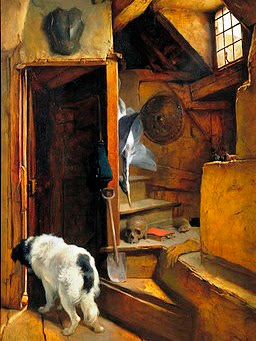 Intriguingly enough this painting (which I find attractively enigmatic) had some sort of 'assist' by the famed English painter Edwin Landseer  (maybe the dog?) who 'touched' up the artwork and added some Shakespearean 'memorials' which if you look hard enough, you'll find. Pre-Landseer's tinkering, the painting was a straighforward enough composition of the stairs leading up to the room in which Shakespeare was born. Or so I understand it.

Read all about it here. Though I did and I'm still a bit confused as to just how much Landseer added to the mix. The painting currently hangs in the Victoria and Albert Museum in London.

The Room in Which Shakespeare Was Born by Henry Wallis.

I recently tried to watch ANONYMOUS,  a film released last year about the possibility of Shakespeare's plays NOT having been written by him but by the Earl of Oxford. Shakespeare, according to this preposterous screenplay, comes into his legendary fame by the back door, in a sort of lightning striking a dolt type of thing. For in this movie, Shakespeare is very much a dolt. Make no mistake. That is the point of this smug disaster of a film. Oxford MUST have written the plays since Shakespeare was just a stupid clod.

Oxford keeps 'his' manuscripts gathering dust, stored in a dark room where, apparently, they languish waiting for the obnoxiously acerbic Earl to find an opportunity to thrust them onto an unsuspecting public.

When the moment is ripe,the plays' authorship is supposed to go to Christopher Marlowe, but Marlowe is simply too physically and morally uncoordinated to grab the reins. Hence, the sudden ascendancy of a no account actor, Will Shakespeare.

The whole pretense is necessary because people of Oxford's titled ilk do NOT write plays, at least, not so anybody of consequence knows about it.

Ladies and gentlemen, I got about fifteen or twenty minutes into this mish-mash before I simply gave up, shut down the dvd player,  re-packaged the film  and shipped it back from whence it had come: Netflix.

The ANONYMOUS screenplay by John Orloff is so disoriented, the film itself so ungainly that you sit there stupefied not only by the dialogue but by the on-screen situations. This is a Roland Emmerich film - isn't he supposed to be some high-toned movie mucky muck? Yegads, what an abomination!

Now look, I am willing to consider the idea that Shakespeare might not have written his plays (I don't believe it, but I'm willing to suspend disbelief if the film or book is good enough) so that wasn't what turned me off this gigantic botch of a movie.

So what did turn you off, Yvette?

It was the sheer mind-boggling, incoherent movie-making. That's all.

On a side note: It seems to me that what all the Shakespeare naysayers apparently forget when dissing the Bard of Avon is this: the serendipity of genius striking willy-nilly.

Ha! Willy-nilly. Just got it.

This movie poster is actually better than the movie.
Posted by Yvette at 4:53 PM