It's Tuesday, so it's Overlooked (or Forgotten) Films day again, hosted by Todd Mason at his blog, SWEET FREEDOM. Don't forget to use the link and catch up on what other overlooked films other bloggers are talking about today.

ANGELS AND INSECTS, directed by Philip Haas, is a difficult film to speak of without giving the shocking denouement away. There's a huge build-up towards that moment and the viewer probably sees what's going on before the hero, naturalist William Adamson (played brilliantly by the wonderful Shakespearean actor, Mark Rylance), so I'm not sure how shocking it really is.....yeah, it's shocking. Prepare yourself.

This is a beautifully opulent movie about very ugly notions. Actually, it's one of the most beautiful movies I've ever seen, despite the loony-toony underpinnings. How can that be? You'll have to make up your own mind. The time is the late 1800's and ANGLES AND INSECTS has the many lush romantic overtones the Victorians loved, as well as the darkly Gothic inclinations of their literature.

Whenever I think of this movie, I tamp down the unpleasantness and think only of the enormous amount of production detail that went into filming A.S. Byatt's original story. It is this attention to detail which enriches what would otherwise have been just another sordid (perhaps more sordid than most) story highlighting Victorian hypocrisy and love run amok.

Victorian England knew a great deal about sordidness, but it was kept well hidden behind the facade of social respectability and good manners, not to mention, proper clothing. Willful and intentional blindness did a lot to keep these fine young ladies and gentlemen playing at perfection under the benevolent reign of a rigidly inclined queen.

The film's cinematography by Howard Zitzermann (the butterfly scene alone is worth the price of admission) is brilliant, as are the dazzling (and I mean, dazzling) costumes by the incredibly talented Paul Brown. I'd venture to say that the movie is worth seeing just for the costumes alone,  if you're so inclined. Sometimes visual artistry in a film is lure enough.

The setting, too is eye-popping, a large and elegantly proportioned manor house in the elegiac English countryside. It is the home of the wealthy  Sir Harald Alabaster (Jeremy Kemp) and his family. The name 'Alabaster' is keenly appropriate. He is a gentleman/scientist who has welcomed William Adamson (Mark Rylance) into his home to stay and help with some sort of work.

Adamson is a naturalist a bit out of sorts with society's deceits, having just come back from a trip to the jungle wilds. In fact, you see him joining in some sort of native ceremony during the opening credits.


In truth, I suspect (and you will too) that Adamson has been brought to the house more for Alabaster's daughter's sake than anything else. He appears to be excellent husband material. 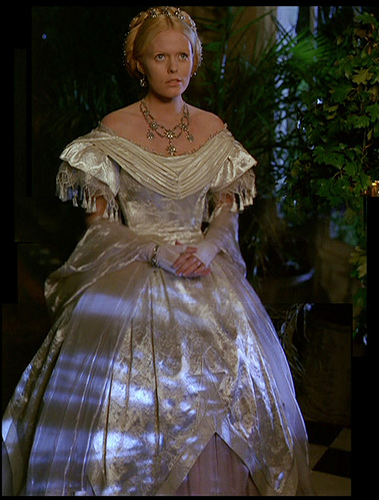 The daughter, Eugenia (Patsy Kensit) is a pale blond creature of icy exquisiteness and Victorian sensibilities - but she seems almost too frail, too delicate, too retiring - all, apparently, that a lady of a certain type should be. 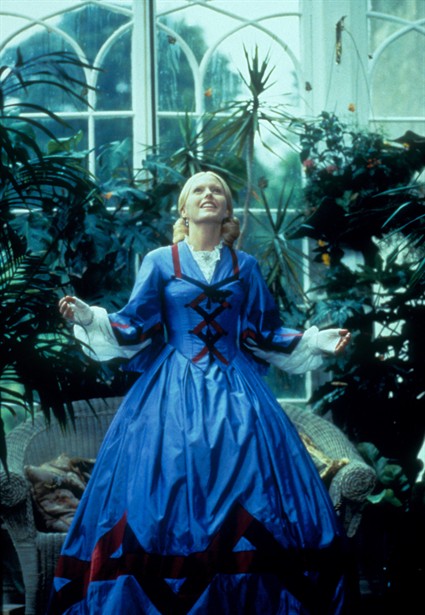 One of the movies most memorable scenes -  a scene which visually explains Miss Alabaster's personality - takes place in the house's conservatory. In order to charm Miss Alabaster, Adamson has released a multitude of butterflies at the moment of their emergence from various cocoons. He wants to delight Miss Alabaster with this exquisite combination of science and beauty.

She is delighted. At first.

As events in the house take on a day to day routine and Adamson becomes part of the scenery, we see that there is something moving beneath the calm surface, something not so nice, not so polite.

Well, we see it, but Adamson, unfortunately, doesn't.

Much of what is meant is rather obvious - a tale told by the costumes themselves.

Lady Alabaster (Annette Badland) as photographed, appears to be made of royal jelly herself, too fat to get around much, she's meant to be a hideous queen bee on her last legs. She is inclined to spells of the vapors, done up as she is in gowns and shawls and Victorian whatnot in the heat of the summer.  Unhappy servants fetch and carry for her. 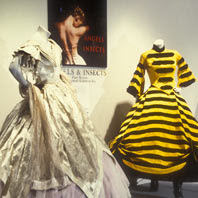 The children, some of them appear to be triplet girls, buzz around her dressed in gowns and costumes in colors resembling the variety of insect life which live on the grounds of the estate. I'm sure you'll notice the eye-popping yellow and black bee striped dress worn by Patsy Kensit in one scene. 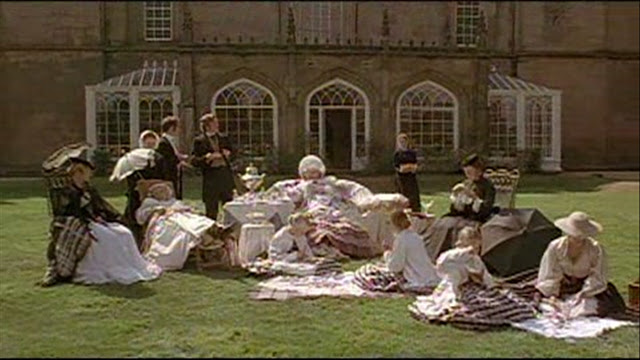 An overwrought tea party out on the lawn.

As Adamson attempts naturalist lessons for the childrens' sake, he unearths plenty of insect life while Miss Matty (Kristin Scott Thomas) Lady Alabaster's companion, takes up a sketch pad. They have much in common, conversing while the family spends their time indulging their whims.

In fact, her talent for sketching is so ideal that Adamson encourages Mattie to work on a book. A naturalist bible, categorizing the variety of insect life to be found in the English countryside. 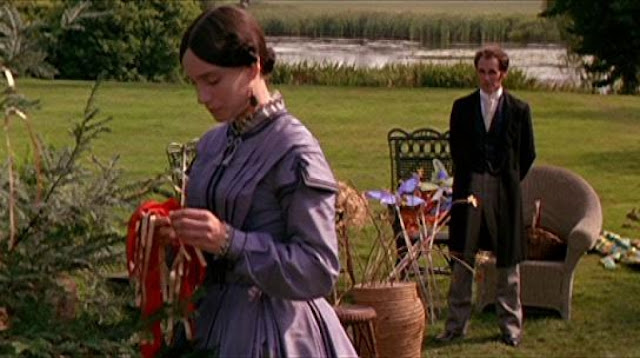 The camera makes sure to capture, in close-up, insects in different forms. At one point, one too many bees drive a tea party indoors. We are more or less forced to make the inevitable comparison - the sluggish activities of the house's human inhabitants to those of the busier, purposeful insects.

When Miss Alabaster charms Adamson into the expected proposal of marriage, she readily accepts. But you know something is not quite right at Casa Alabaster. The feeling is made clearer when you notice the odd interaction between family members.

The brother, Edgar Alabaster (Douglas Henshall) is nothing but a spiteful lout with obvious malice towards Adamson and a droit du seigneur attitude towards the servant girls.

The mother is fast fading away of some undisclosed condition, while the husband, Sir Harald, fusses about all day in his study/laboratory, ignoring the human drama outside his door. Perhaps already aware that a changing of the guard is underway. 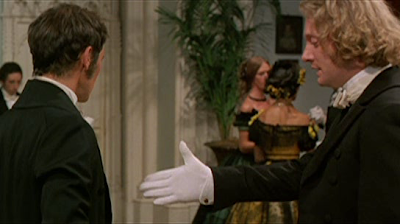 There is a great uneasiness lurking in the house. The servants apparently know, but keep quiet about it for fear of losing their positions. The only one who keeps an aloof eye open and may or may not speak is Miss Matty, the governess. 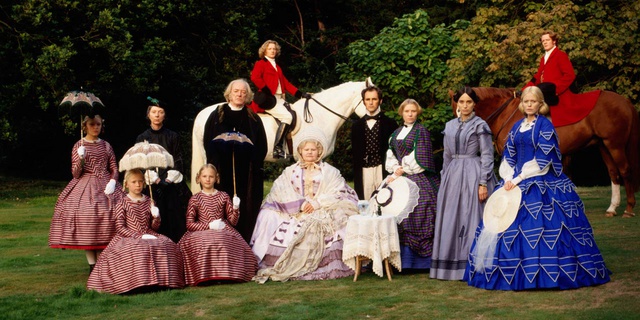 Over time, several children are born to Adamson and his wife, but he becomes restless - confined to living in one place. Though he loves his wife, he feels oppressed. The only one he can really talk to is Lady Alabaster's companion, she is the one person who speaks with him of the things that might actually interest a naturalist and man of science and ideas. Adamson finds himself contemplating the attractions of rational thought and artistic skill. 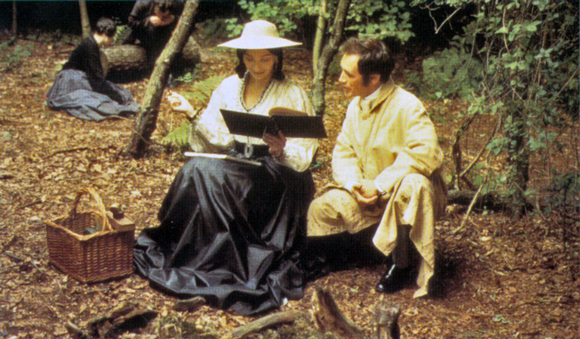 When the full scope of what has been going on (I really can't say any more) is revealed, Miss Matty and William Adamson give us the only ending possible.

This is a definite R rated film, there is nudity and sexual activity, not to mention the repulsive doings that force William Adamson to - finally - acknowledge the truth in a harrowing, superbly acted scene near the end.

But if I can take it, so can you. In spite of everything, it's a hauntingly beautiful film though the story itself is as ugly as can be. Human beings can be a nasty lot. Insects, at least, don't bother pretending.