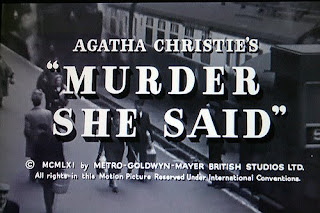 Today it's Overlooked or Forgotten Films day ( as it is every Tuesday) at Todd Mason's blog, SWEET FREEDOM. Don't forget to check in and see what other films other movie mavens are talking about today. You're sure to find a film or two you'll want to renew acquaintance with or perhaps, view for the first time.


**********************************
I hadn't seen MURDER SHE SAID in many years and was thrilled when it became available on Netflix. This is the first and my favorite of the Margaret Rutherford/Miss Marple films which are very loosely based on the Agatha Christie books featuring the aging spinster sleuth.

But forget I said that. This is not the Miss Marple we've become accustomed to, either in the original books or in the marvelous Joan Hickson interpretation (about which, more later) done in the 1980's for PBS. 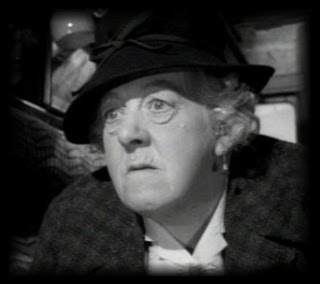 In no one's imagination (except maybe the film-makers') is Miss Marple anywhere near as rotund, robust, hearty and gruff as she's played by the wonderful Margaret Rutherford, but what the heck, in my view this is Rutherford's movie. Pretend she's not the Miss Marple we all know and/or remember. Just think of her as someone else, a completely different character who happens to be named Marple.

Why, in the movie, she doesn't even live in St. Mary Mead. Who ever heard of such a thing? Obviously it can't be our dithery Miss Marple with the fluffy air and the knitting needles. The only thing this Miss Marple has in common with our Miss Marple is her intelligence and a will of steel.

This Miss Marple even has a male companion, for goodness' sake, A Mr. Stringer. (Played by Rutherford's long- time husband, Stringer Davis.) He's a librarian and as diffident as Miss Marple is demanding and overbearing. To watch the two of them 'disguised' as train workers, searching for clues along the tracks makes for a very entertaining few minutes. 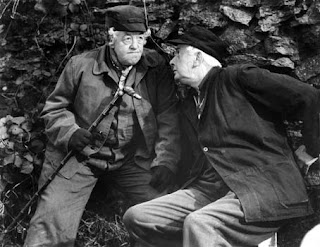 The film (directed by George Pollock) is based on Christie's 1957 book, 4:50 FROM PADDINGTON or WHAT MRS. McGILLICUDDY SAW.

Mrs. McGillicuddy is a friend of Jane Marple's who is returning home after traveling to London to do some shopping. From the window of her compartment she watches helplessly, horrified, as a woman is strangled across the way in a compartment on a closely passing train. Of course no one believes her because no body is found, on the train or elsewhere.

The only one who believes her tale is her close friend, Jane Marple. 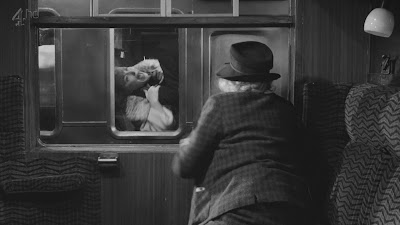 However, there is no Mrs. McGillicuddy in the film. Here, Miss Marple (Margaret Rutherford) sees the murder from the train window herself. She is the one who reports it. She is the one incensed when no one believes her. The police (in the form of Inspector Craddock) thinking her instead, a dotty old lady who dreamed the story up.

In the book, primarily because of frail health, Miss Marple hires the fabulously efficient Lucy Eylesbarrow to find the body she is sure (after doing a bit of logistical investigation herself) lies somewhere on the Crackenthorpe property - the train tracks follow closely the boundary of the huge estate belonging to the family of a biscuit manufacturer. The estate lies somewhere south (I think) of St. Mary Mead - or maybe north.

But in the film, no St. Mary Mead, no Lucy and no McGillicuddy and no several other characters as well.

So, as I said, forget about the original book and just enjoy the film purely based on the robust charms of Oscar winner Margaret Rutherford who was one of filmdom's more idiosyncratic originals. I adore her, but she takes a bit of getting used to.

Okay, so keeping all that in mind, let's move forward. 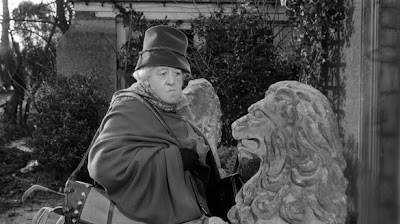 Miss Marple decides to investigate the murder of the woman on the train even if the police are not interested. She connives to get herself hired as a maid (!?) at the Crackenthorpe estate - in the film, known as the Ackenthorpe Estate. It was the 1950's when large houses were desperate for hired help.

At the house she is greeted with suspicion by the housekeeper played by none other than Joan Hickson who would, years later, play the definitive and Christie approved Miss Marple. How's that for coincidence? Providential, I call it.

A younger Joan Hickson.
Anyway, Jane is also met with suspicion by the mischievous Alexander (Ronnie Raymond), a curiously erudite young boy with the spiffiest upper class accent you'll ever hear. He is a pleasure to listen to and is the second thing I love best in the film. He's like a miniature version of Anthony Andrews sporting his mesmerizing Brideshead voice.

Ronnie Raymond, an Anthony Andrews look-a-like.
Once Miss Marple assures the lady of the house, Emma Ackenthorpe (a colorless Muriel Pavlow), that despite her age, she is willing do the cleaning and cooking and anything else desired, Jane is there to stay - at least until she finds the body. Of course none of the family knows her true reason for being there.

Muriel Pavlow as Emma Ackenthorpe
The rest of the staff consists of a sinister gardener and the aforementioned housekeeper who refuses to stay in the house after dark. The gardner hulks around the estate with a snarly German Shepherd at his side.

Besides Emma Ackenthorpe and Alexander, her nephew, the only other occupant of the huge house is old Ackenthorpe himself, a semi-invalid who mostly remains in bed bellowing orders. He is played in his best bellowing attitude by the wonderful James Robertson Justice - the third reason I love this film. 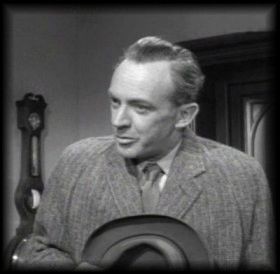 Ackenthorpe's only visitor seems to be Doctor Quimper (Arthur Kennedy) who arrives to give him injections and oversee his health once or twice a week and who, apparently, has his eye on Emma. He drives the sweetest little 50's coupe you've ever seen.

Ah, the good old days when you could keep a doctor on retainer. However, no one in the film seems to notice that Quimper doesn't have an English accent, but I digress. 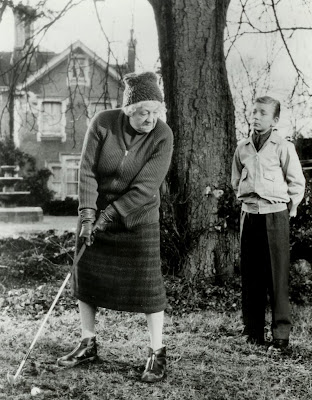 Once Miss Marple - on the pretense of practising her golf swing - oh, did I forget to mention that she'd arrived at the house with luggage AND golf clubs? Well, she did. So while out and about on the grounds, she spots some run-down buildings and decides one of them, certainly, is a perfect spot to hide a body.. Later that night she goes to investigate and before you can say, there's a dead body in the Egyptian sarcophagus, there's a dead body in the Egyptian sarcophagus.

The cops are called in, of course, and there's Miss Marple with a smirk and a triumphant gleam in her eye. Inspector Craddock (Charles Tingwell) says, "You?!"

When the three Ackenthorpe n'er do well sons and the husband of their deceased sister (Alexander's father) show up to see what's what at the old homestead (the cops want to interview them), two of the brothers meet a grisly end. The Ackenthorpes are being done away with one by one. 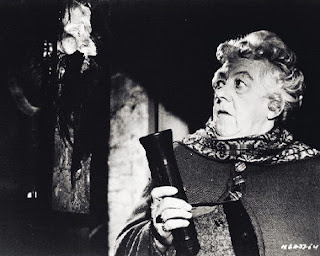 In the end, it's Jane who figures out the far-fetched motive and, more importantly, who the killer is, much to the police's chagrin. She then proceeds to use herself as bait to catch the murderer.

Then we get one of the most downright hilarious marriage proposals you will ever see. Hint: it involves Jane Marple. Wait for it.

As I said, don't expect to see the 'real' Miss Marple here, but make a point to see the film anyway. It's quite wonderful in its own singularly sinister (though very amusing) way. The soundtrack by Ron Goodwin is perfection, employing the use of a jaunty harpsichord in lighter moments.

The other three 'Marple' films starring Margaret Rutherford are even more far-fetched than this one, but as long as you don't expect the Christie character, they're okay. Of the four, MURDER SHE SAID remains my favorite. 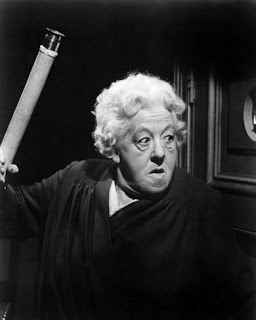