Duel After the Masked Ball by Jean Leon Gerome - What do you suppose brought this on? 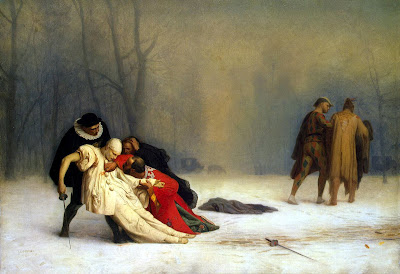 I know it's the aftermath of a foolish duel, the painting itself tells me that, as well as the title, but - who, what, where and why?  I've been trying to find out more information about the scene but to no avail - yet.

Jean Leon Gerome  (1824 - 1904) was a successful painter and sculpture in the French Academic style. He is known and easily recognized for his Historical scenes, Orientalist themes as well as his work based on Greek Mythology. My other favorite of his paintings is the almost overwhelmingly romantic, Pygmalion and Galatea.

But lately I keep going back to Duel After the Masked Ball and wondering what on earth brought this on. Is the painting based on an actual duel? Or is it an allegory of some sort. The costumes are fairly specifically outlined in the descriptions I've found online - perhaps the meaning is in that specificity.

Though I am moved by the powerful scene, I am also caught up in its colorful, romantic melodrama.

There must have been some tremendous emnity involved, some dreadful breach of propriety - an insult that could not be borne. A personal affront? Impropriety with someone's wife or sister or whatnot? A blackening of the family name? A wager gone bad?

What do you think?