The Oscar isn't the only award being handed out this week...

I'm running a little late on my acceptance and thankful acknowledgement of an award I received a few days ago from Lucy Nation over at her wonderful blog, TALES FROM THE FARAWAY TREE.

I'm thrilled when someone recognizes the work that goes into framing and forming the almost daily posting that goes one around here. Lately, I know, I've been dragging a bit behind in keeping things brisk, but I've decided that posting on a daily basis might not be ideal for me.

Dare I say it? It's just plain hard work trying to come up with something interesting, entertaining and enlightening day after day - and believe me that's what I've always tried to do.

So when Lucy - out of the blue - rewards my efforts with an award, I am as thankful as can be.

Versatile - exactly what I try my damndest to be. 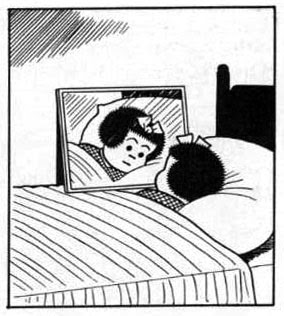 Ernie Bushmiller
1) I've worn my hair cut very short since my early twenties - eons ago. As much as I'd have liked to have had long hair now and again, my hair refuses to cooperate. It grows out instead of down. I have enough hair on my head for several people so unless I want to look like Nancy, I must keep it cut very short.

2) We didn't have television at home until I was around 10 years old - and at that, we were only the second family on our block to have one. It was an Admiral (made in America) and it was nearly indestructible. It lasted many years. The first show I ever saw on TV was 'Rootie-Kazootie'.

3) I had a crush on Hercule Poirot when I first began reading Agatha Christie books back in my teens. Yes, it's true. To this day I adore the man. My only excuse is that I was always a big admirer of brain-power. I also loved his French...uh, Belgian, accent.

Of course, that was the Poirot of the books. Once I saw David Suchet's portrayal, I realized yet again that Poirot was the man of my dreams.

4) I am a Gemini. Which should explain things you may have wondered about.

5) At last it can be told: While I don't own a Gemini hat,  I actually own a Deerstalker. You know, Sherlock Holmes and all that. I bought it in England, years ago.

Holmes is my second Big Crush, after Poirot.

6) If ever I should win the lottery, I'll be moving in across the street from the Metropolitan Museum of Art.

7) I still love picture books and a nice little collection. Why should kids have all the fun?


*****************************
I was supposed to name some new bloggers I thought worthy of receiving the Versatile Blogger Award, but after thinking about it, I've decided maybe it's better if I don't risk hurting anyone's feelings.(I've feeling chicken-hearted these days.) So I'm doing away with this part of my award duties.

Again, thank you Lucy, for thinking of me and most of all, for liking my blog.