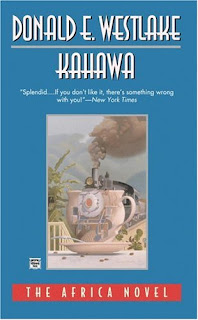 Today is Donald Westlake Day over at Patti Abbott's blog, PATTINASE, in honor of the prolific and much beloved writer who passed away in 2009. He left behind a huge store of novels and short stories, many of them written under pseudonyms. Check out Patti's blog for more info on Westlake and why Patti chose today to honor him. Also for more posts on various Westlake books written with love by many bloggers much more familiar with Westlakd than I.

Sad to say, I've never read any of Westlake's books unless I read one under a pseudonym and simply forgot about it. It happens.

I found a listing for a Westlake early book (1982) in a terrific little anthology I own, THEY DIED IN VAIN - Overlooked, Under appreciated and Forgotten Mystery Novels, edited by Jim Huang. (In and of itself, an overlooked book.)

The title of the book is KAHAWA and all I'm going to do is quote what Kevin James wrote about it to give you an idea of the sort of thing Westlake did best.

Scouting out the abandoned railway spur where they will (temporarily) hide the coffee train they plan to steal from Idi Amin, Isaac (ex-Ugandan civil servant, family slaughtered by Amin for...well, no reason, really ) and Frank (ex-pat mercenary) park the Mercedes in which they infiltrated Uganda (in disguise) on the old access road, now overgrown by the jungle.....

Donald Westlake puts the ball in play with a gloriously intricate plot. Idi Amin has to sell the coffee to get the hard currency he needs to provide the thugs that keep him in power with the luxuries that keep them happy. One of Amin's henchmen (Chase) plots the heist so as to leave Uganda in style, as things are getting so crazy that Amin might actually turn on him. Chase contacts an Indian merchant in neighboring Kenya who can both put together a team to steal the train and launder (as it were) the coffee, while, of course, plotting to double cross him with the assistance of the principal of the Swiss/German hedge fun that's financing Amin's sale, who ...you get the idea.

But, of course, as Helmut Von Militke almost put it: no plot survives contact with the enemy.

....While the story alone makes KAHAWA a brilliant thriller, the characters the writing elevate KAHAWA into a brilliant novel,  full stop. Indeed, one imagines that Westlake put KAHAWA together only by winning a fierce bidding war with V.S. Naipaul for even the most minor characters.

.....So, just as people share 98% of their DNA with chimpanzees, KAHAWA shares many of its base constituents with other thrillers. And the difference is as marked. One should read KAHAWA just to see what thrillers can be.

Sounds like I may have to look this one up.
Posted by Yvette at 2:03 PM