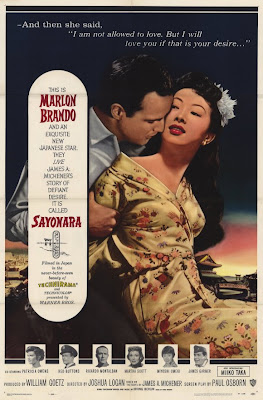 Today is Overlooked or Forgotten Movie Day and sometimes reality intrudes and you gotta' go with it so I offer apologies for the lateness of my post. Shame on me. And on a day with such romantic implications, too. But, late being ever so much better than never, here's my review of a wonderfully romantic film you might not have seen. Oh, and don't forget to check out the rest of the Overlooked Films other bloggers are talking about today over at Todd Mason's blog, SWEET FREEDOM.

SAYONARA is a 1957 film based on a book by James Michener (with a different ending) and turned into a luxurious, if  occasionally brittle, romantic film of forbidden love. It is set in Occupied Japan after WWII when the American occupying force did their stiff-necked best to hamper romantic happy endings. Fraternization was frowned upon and rules against marriages between Japanese women and American men were strictly, and often, cruelly enforced. The marriages if they did manage to take place, went unrecognized.

Lavishly directed in splashy Technicolor by Joshua Logan, the screenplay by Paul Osborn - based on Michener's book - is not afraid to tackle the themes of racism and prejudice. It is all remarkably well done considering the 1957 date and of course, everyone looks wonderful.

The only sour note, expressed by many, is the casting of Ricardo Montalban as Nakamura, a Japanese Kabuki performer. In truth he is quite good, so it's hard to quibble with the film-maker's choice to go this route. There is something about Montalban's quiet dignity and seething sexuality which I find intriguing. His scenes with Patricia Owens are wonderful for what lies beneath the surface of their seemingly banal conversation. I love the moment in the film when he removes his Kabuki make-up while Owens watches. (If I'm remembering correctly.)

But I'm probably in the minority in this view.

Marlon Brando plays Air Force Major Lloyd 'Ace' Gruver, recently transferred to Kobe, Japan at the urging of his almost-fiance, Eileen Webster (Patricia Owens) who happens to be the daughter of the commanding officer in the district.

Gruver, a good soldier and an easy going, confident sort, is himself opposed to interracial marriage - Brando sports a Southern accent which adds background intrigue to his character, a West Point graduate.

In Kobe, Gruver meets up with an old friend, Airman Kelly played by Red Buttons in an Academy Award winning performance. Kelly has met and fallen in love with Katsumi, played by the
gloriously understated and charming, Miyoshi Umeki - in her Academy Award winning performance. Despite prejudice and draconian Army rules and regulations, Kelly and Katsumi plan to marry.

Gruver tries to talk him out of it, but when he meets Katsumi for the first time (the way Brando says 'Katsumi' in his Southern accent is just, dare I say it? - adorable) he realizes why Kelly is so devoted to her - she is gentle charm personified.

When it's obvious he can't dissuade the couple, Gruver tries to smooth troubled waters as he realizes that Kelly is being given every dirty duty his commanding officer can find to discourage Kelly and keep him from his heart's desire.

One evening at the theater, Guver catches a glimpse of the spectacularly elegant, Hana-ogi, the star of the Takarazuka-like company of dancers and singers. It is another ritualized sort of theater presentation with women playing all the parts in the different skits, including the men. The women who perform live in a kind of encampment, a dormitory of sorts - kept as much as possible from socialization with not only the occupying army, but Japanese men as well. They are forbidden to marry.

Gruver is determined to meet this beautiful mysterious woman and breaks several rules to do so, despite the fact that Eillen Webster is waiting none too patiently back at headquarters, for an official proposal of marriage.

Along the way, Gruver meets Captain Bailey (James Garner), a guy with a much more relaxed attitude towards the local womanly flora. He tells Gruver that Hana-Ogi is forbidden fruit.

But Gruver is undeterred, he's not used to being told 'no', and finally Hana-Ogi succumbs to his somewhat wayward charm and perseverance. They arrange to meet in Kelly and Katsumi's small home near the river.

Gruver and Hana-Ogi's love affair is just beginning - for that's all that Gruver plans since she tells him from the first that it will be nothing more, it can be nothing more. She would be disgraced if it were found out she had been seeing any man, but especially an American. He, only too clearly, knows the rules he's breaking as well. But he has no plans to fall in love.

In the meantime, Kelly is given orders to fly state-side. He is being sent 'home' to America. Needless to say he doesn't want to go, his 'home' is with his wife, Katsumi. But she is eligible to go with him. It is a cruel enforcement of the rules by Kelly's superiors especially when we learn that Katsumi is pregnant. Gruver pleads with the General to bend the rules. But to no avail. They would callously force Kelly to abandon his wife and child. Orders are orders.

But of course, there's no accounting for the human heart. These orders lead to one of the saddest and most powerfully moving scenes I've ever watched in any film.

SAYONARA has everything you could hope for in a love story: excellent performances (Brando too was nominated for an Oscar), passionate love scenes, drama, desperation, conflict, and heartbreaking tragedy. It also has beautiful scenery, a good soundtrack and when all else fails (which it hardly does) handsome men and beautiful women in an exotic locale.

Not much more to look for in a romantic drama.

If you wish to see the  (kind of corny) SAYONARA trailer, please use this link.
Posted by Yvette at 2:23 PM