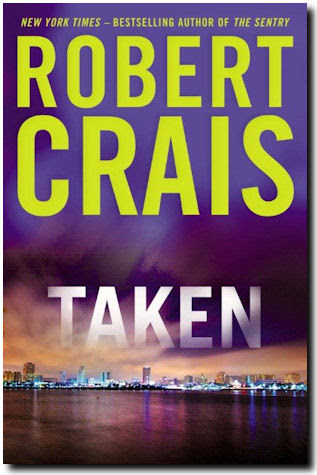 Some writers get better and better with age and experience, some start out great and just get greater. That's Robert Crais.

TAKEN is the 12th Elvis and Joe book, though I notice that fantasticfiction has it as a Joe Pike book. I beg to differ. But, either/or, it's all in the family. Numbers are irrelevant. Let's face it, Elvis and Joe are family - their remarkably close-knit friendship going back many years - each having saved the life of the other several times. (Heck, occasionally I feel as if they're my family. Wouldn't hurt to have a couple of bruisers with brains and military training hanging about now and again.)

The setting is Southern California, Elvis and Joe's preferred stomping grounds. Robert Crais knows this area of the world better than just about anyone. He writes about it with comfortable familiarity and style. But he knows the danger, he knows how the bad guys operate, he knows about the vile human trafficking taking place this close to the border.

Krista Morales and her boyfriend, Jack Berman have disappeared, though her mother believes it's more likely a prank of some sort - maybe an elopement. She's not happy with Berman as a boyfriend for her daughter, a college grad who is headed for a great job in Washington - destined for big things. Not bad for the daughter of a Mexican immigrant.

But Nita Morales has gotten a disturbing phone call demanding ransom for her daughter and decides to call in the World's Greatest Detective. Elvis Cole always says he's joking when he calls himself the world's greatest, but we know he really is the greatest.

Sure enough, Krista and Jack are in serious trouble. They've witnessed an execution out in the desert and been mistakenly scooped up with a truck load of illegals - held captive by a band of cold-blooded cut-throats known as bajadores. These are bandits who prey on other bandits, stealing and selling human cargo as if dealing with items off a grocery shelf.

Poverty stricken illegals are caught in the middle - siphoned in from other countries (not just Mexico) by competing cartels who charge exorbitant fees with no guarantees. This is such a tragic situation and I can only imagine that the reality of it is just as sad and dramatic as Robert Crais makes it out to be.

Elvis Cole finds signs out in the desert that show him Krista and Jack have been taken. He also discovers a body dump nearby and recognizes this as the work of the bajadores. He breaks the bad news to Nita Morales.

Cole realizes he's going to need help and calls in Joe Pike. Pike calls in Jon Stone, another 'independent contractor' - a quirky (very quirky) mercenary with a photographic memory and an ability to speak several languages. Jon can be off-putting, but he and Pike work very well together having essentially received the same elite military training. These are two very dangerous men and TAKEN is not a pretty story.

When Elvis Cole is, himself, taken by the bad guys - you almost role your eyes. Boy did they pick  the wrong person. Pike is intent on getting Elvis back but, as Jon Stone tells Nancy Stendahl - Jack Berman's aunt who also happens to be a federal agent: "When we find these people, if Cole's dead, they aren't walking out. There will be no court of law. No judge and jury. You're an Assistant Deputy Director at the ATF. This will not go down in any way you can live with."

They know that Elvis has been taken by a guy the Mexicans call the Syrian, a merciless killer whose business is stealing and selling human beings, replenishing his cargo from other bajadores then getting rid of the detritus of murder as he moves from 'safe house' to safe house.

The Syrian and his henchmen do not play by the Marquis of Queensbury rules. The violence in TAKEN can be hard to deal with, but these are people who have no conscience - Robert Crais understands this.

As for the 'how-to', Crais has divided the book into sections, some which count back in time, some which separate the points of view of Krista and Jack, Elvis, Pike, Jon Stone and even Nancy Stendahl who enters the story in the latter part of the book. This works well in the telling of the story, acting as a kind of kettle drum roll as events unfold one by one, hour by hour, day by day.

The book is handily designed in way that makes everything clear as you go along.

An amazing book written by an author at the very top of his game. A guy unafraid to try something new.
Posted by Yvette at 3:06 PM