Monday Book Review: A COFFIN FOR DIMITRIOS by Eric Ambler 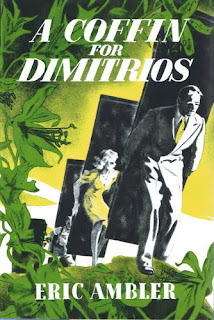 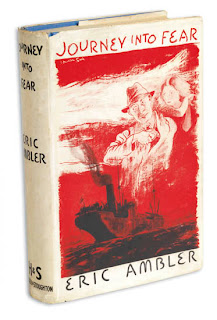 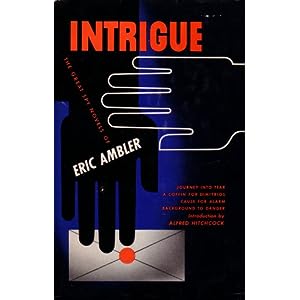 I'm reading Eric Ambler (1909 - 1998) for the first time this year, this month, last night. Even though I'd heard of him, obviously, for many years, I'd never read any of his work until I picked up INTRIGUE at the library - it features four of Ambler's more famous novels. I'm on the third one now, CAUSE FOR ALARM. I read JOURNEY INTO FEAR (1940) and A COFFIN FOR DIMITRIOS (1939) and really enjoyed both, even though I am not, generally, a big fan of spy novels - most of them are so damned grim and things rarely end well for anyone.

JOURNEY INTO FEAR is polished, well conceived and executed by an obvious master of the genre. Most of the story takes place onboard a ship supposedly carrying the hero out of danger - my sort of plot. I was hooked on Ambler's writing style almost from the first, surprised by how much I liked the way he went about things. In fact I liked JOURNEY INTO FEAR just a tad more than I did Ambler's most famous work, A COFFIN FOR DIMITRIOS, mainly because DIMITRIOS takes a while to really get going. (But once it does, of course, you're hooked.)
I'm concentrating my review on DIMITRIOS only because it's the one I finished last night and its still fresh in my mind. Old-lady memory is notoriously unreliable past the second or third day after reading a book.
I liked the first line of DIMITRIOS though apparently it is the comment of an omniscient narrator whom we, somehow, lose along the way. But no matter.
A Frenchman named Chamfort, who should have known better, once said that chance was a nickname for Providence.
As I mentioned, the novel takes a few beats to get going and that's my only quibble, -other than that it's a pretty perfect sort of spy story - revealed layer upon layer, picking up speed as it goes along. I haven't seen the film (I think it stars Zachary Scott one of the wierdest actors - in my view - that Hollywood has ever produced), but I think I just might watch it after this.
Here's the basic story:
Mystery writer Charles Latimer is tired; after writing a string of relatively successful books, he goes on holiday to Turkey, hoping that taking it easy for awhile might refresh him. It is an uneasy time, war is fermenting in Europe and soon enough, exotic travel will be curtailed. He is a noticing sort of man as most writers are. He is also a curious man and it is this curiosity that gets him into trouble once he lands in Turkey and, typically, gets invited here and there for drinks and other social niceties. At one of these social events, he meets the oddly voluble Colonel Haki, head of Turkish secret police. Latimer is drawn into a mystery after Haki tells him of the dead body dredged that night from the river.
It is a victim of murder, identified as Dimitrios Makropoulos. A known criminal type whom no one will mourn. On an impulse, Latimer asks to see the body, reasoning that it wouldn't do a mystery writer any harm to see a victim of violence. In truth Latimer's curiosity has gotten the better of him.
Once he's seen the body of Dimitrios, Latimer, usually a reserved English gentleman, decides then and there to try and fine out more about the victim. What caused this particular man to be stabbed to death and thrown in a river? What were the ramifications of fate that wound up costing Dimitrios his life in such a brutal manner? Bit by bit, the more Latimer finds out, the more intrigued he becomes, the more he wants to know about Dimitrios Makropoulos, not just a petty sort of criminal (clearly) but a mastermind, an international gangster of the most vile sort.
One of the things I like most about the story is how Dimitrios is shown from various perspectives, as Latimer searches out and interviews past acquaintances. There is no softening of his criminality, except a mention that Dimitrios' early life was hard - at that time, who's wasn't? But not everyone with a hard life turned to crime with such ease. No, Dimitrios appears to have had an enormous affinity for it.
There's not much unnecessary explanation of the criminal mind, and evil is discussed with a kind of rational resignation:
Three human beings had died horribly and countless others had lived horribly that Dimitrios might take his ease. If there were such a thing as Evil, then this man...
But it was useless to try and explain him in terms of Good and Evil. They were no more than Baroque abstractions. Good business and Bad business were the elements of the new theology. Dimitrios was not evil. He was logical and consistent; as logical and consistent in the European jungle as the poison gas called Lewisite and the shattered bodies of children killed in the bombardment of an open town. The logic of Michelangelo's David, Beethoven's quartets and Einstein's physics had been replaced by that of the Stock Exchange...and Hitler's Mein Kampf.
Good writing, that. It brings to mind the current view of and rationale for the most hideous acts in a supposedly more enlightened age. Don't we view evil in the same way even now? Business is still all, it seems to me - what with corporate America's hold on government actions stronger than ever and the widening dominion of the internet. New theology, indeed.
If you want to read one of the true masters of the spy genre, pick up Eric Ambler and indulge in his very well written, often prescient, novels. These guys from the past are called great for a reason.
This review qualifies for entry in the Vintage Mystery Challenge. I'd like to list both JOURNEY INTO FEAR (not reviewed) and A COFFIN FOR DIMITRIOS. Both read, both enjoyed enormously.
Posted by Yvette at 3:35 PM