ENSLAVED BY DUCKS is one of the most delightful books I've ever read. It reminded me of nothing less than the animal 'memoir' classics of Gerald Durrell. Mid-western author Bob Tarte has a dry, self-deprecating wit, a tart wit, and from the outside looking in, he appears to have the patience of Job as well. (With the help of an understandable daily dose of Zoloft.)

Before I say much else, I have to say that I am very fond of tales of odd assortments of animals come to live with humans and the hilarious bedlam that often ensues. So when librarian extraordinaire Nancy Pearl highly recommended ENSLAVED BY DUCKS, I was all for it. Most especially since I have a fondness for ducks and geese, possibly because I've never been enslaved by any. (Does being enslaved by a dog count?)
Anyway, this is the often very touching and generally hilarious story of how a man named Bob left city life in Grand Rapids, Michigan and went to live in the countryside with his wife, Linda. They weren't long settled into their little house in the country when an irascible rabbit named Binky joined the family. Following Binky in rather quick succession there came, one by one (or two) as if to an ark, the oddest assortment of animals and birds you might ever want to meet.
(And no, not a dog among them. Two cats, yes. But no dogs. Just as well, I suppose.) 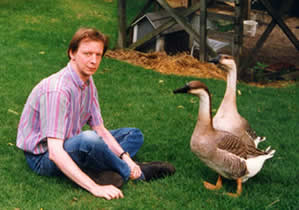 The resulting book is a gentle testament not only to Bob and Linda Tarte's patience but to their enormous capacity for love and understanding of their fellow feathery and furry creatures. Not to mention that some of the incidents described by Bob are laugh-out-loud funny especially when told with his wry sense of the absurd. I began reading ENSLAVED BY DUCKS one evening and then, to my surprise, simply could not put it down. I just wanted to see what happened next to Bob and Linda and their menagerie.
Here is an excerpt from Bob talking about their newly adopted African grey parrot, Stanley (who was later discovered to be a female and acquired the name, Stanley-Sue):
Bird experts agree that the first step in gaining control over a parrot is convincing it to 'step up' on your hand upon command. Bird experts are easily identified by their scarred hands, and I realized that the road to a better bond with Stanley wouldn't necessarily be painless....I tried calling "Step up, Stanley," from across the room and waited vainly for a raised foot to wave at me. Repeating the experiment a few inches from him resulted in the expected lowered head and threat to bite. And bite he did when I slid my hand closer. After examining my flesh for punctures and finding only a minor indentation, I shelved my usual cowardice and braved a second attempt. Stanley nipped me again but when I refused to withdraw he seemed to sigh with his whole body as he graciously stepped onto my hand. Lifting him to chest level, my exhilaration soured when I realized I had no idea what do do with him now. To make Stanley think my command had been part of a grand plan instead of mere
grandstanding, I took him on a short tour of the living room, pointing out such landmarks as the couch, TV, and coat rack.
Once I became skilled at picking up our parrot, I needed something to do with him. The logical choice was taking him into the living room after dinner to share the entertainment spectacle of Wheel of Fortune with us. Amazingly, the antics of Pat and Vanna failed to divert him.....Though I was delighted by the progress Stanley had made, I had to admit a basic feeling of disappointment as our first year with him ground on. African greys are potentially the best talkers in the bird world, able not only to remember complex phrases, but also to deliver them in tape-recorder-perfect, embarrassing imitations of their owners' voices.....
So I had hopes that Stanley would be a kind of homunculus with whom I could converse, joke, collaborate on crossword puzzles, and conspire against Linda. But his phrase book began and ended with "Big boy, Stanley" and "Hello," which barely opened the door to banter, much less discussions of particle physics.

Living in the house or in close proximity over the years:

Rabbits: Binky, Bertha, Bertie, Rollo and Walter.
Parrots: Ollie, Stanley Sue, Dusty.
Other Birds: Howard, Chester, Elliott, Farley, Rossy, Regie, Sophie, Tillie and Weaver.
Cats: Penny and Agnes.
OUTDOOR ANIMALS:
Ducks: Daphne, Phoebe, Martha, Peggy, Chloe, Blabby and Wing Ding, Stewart, Trevor, Marybelle, Clarra and Gwelda, Hector, Richie and Timmy.
Geese: Liza and Hailey
Turkeys: Hazel and Lizzie. (Plus two nameless others.)
And two extraordinary humans:
Bob Tarte: put-upon author
Linda Tarte: long-suffering wife to unforntunate author
To find out what types of rabbits, birds, ducks, geese, etc (and their various neurosis) invaded Bob and Linda's welcoming house, you have to read the book. Also, check out the ENSLAVED BY DUCKS website for pictures of all the animals and notice of a second book by Bob: FOWL WEATHER. (Which I can't wait to read.)
I will tell you this, once you've read ENSLAVED BY DUCKS you will never look at a duck or a pigeon or a parakeet or a starling or a rabbit or a turkey in the same way again. 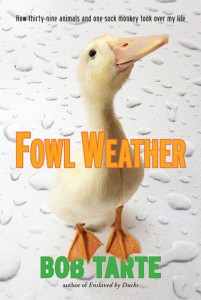 This review of ENSLAVED BY DUCKS counts toward my participation in the Dewey Decimal Non-Fiction Challenge which is hosted by The Introverted Reader.