New York Times Film Critic, A.O. Scott talks, today (on video), about the classic 1955 film, EAST OF EDEN. A film based on John Steinbeck's epic book, it starred the immortal James Dean (Scott himself calls Dean 'immortal') who, as we all know, was killed in a horrible automobile accident at the age of 24 after making only three films. 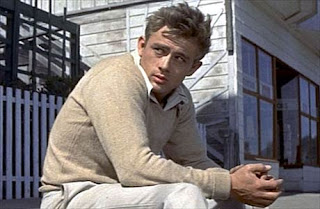 It still seems almost impossible for me to believe that he died so young and so awfully long ago. What an utter waste. But at least we have the three films: EAST OF EDEN, REBEL WITHOUT A CAUSE and GIANT, to remember him with. But, goodness, think what he might have done.

Of the three, EAST OF EDEN is my favorite and I remember weeping in the theater, when I first saw it. The sountrack itself is enough to make me teary. At the time, the film was so different from anything I'd ever seen, Dean's performance so unique, that the impression it made is still alive in me today. I must mention too, that Julie Harris, in my view, more than kept up with him. The love scenes had such a tenderness to them, such a quality of mixed emotions.
I'm glad to see that A.O. Scott, one of the few critics whom I occasionally pay attention to, appreciates EAST OF EDEN and featured it today in one of his video critiques. It was a nice surprise.