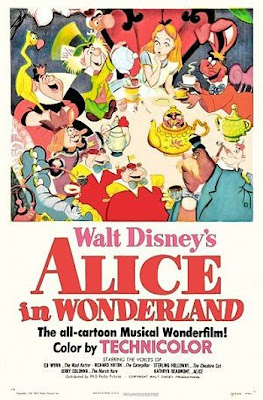 I must not be an adult. Honestly, I'm looking at a list of animated features for adults and noticing I've only seen two of the films listed (SPIRITED AWAY and TRIPLETS OF BELLE VILLE, liked them well enough though I found them both too long) and that the rest of them, except for PERSEPOLIS and WALL E, hold little interest for me. Although I have wanted to see PRINCESS MONONOKE, having heard great things about it. I think I've got it on my Netflix queue.
By the way, thanks to Healigan's blog Movies at St. Marks for the link to the piece by Matthew Baldwin in The Morning News. I like his comments, gosh I wish I could be all young and hip and with it about the movies. But I can't. So, I hope you'll bear with my old folks at home, routine.
My own list of Favorite Animated Films (whether they're deemed good or tolerable for adults or not) goes like this:
ALICE IN WONDERLAND (1951) - Yes, the Disney version. I can't help it. This is the film that convinced me I wanted to be an illustrator. Two scenes still live in memory: the talking and singing flowers scene ("You can learn a lot of things from the flowers...lalala!) and the scene where the guards (really a deck of cards) march out of the Queen of Hearts' castle to the tune of a nicely done, memorable march that I still hum to this day. I'm also fond of the upper, UPPER crust speaking voice of the Alice character. I would have given anything to sound like that. This is probably the very beginning of my love for all things British.
FANTASIA(1940) - The original version with the stirring and memorable Night On Bald Mountain sequence that convinced me I loved Mussorgsky's music then and now. Actually, it was my first exposure to that particular composer, so for that alone, I view FANTASIA as memorable. I also loved the scene of Mickey Mouse greeting the conductor Leopold Stokowsky in silhouette. Also loved The Sorcerer's Apprentice sequence primarily because of the catchy music by Paul Dukas. (It was my late mother's favorite music.) Also loved the Nutcracker Suite scenes. A very impressionable film, I think, if seen at just the right time.
PINOCCHIO (1940) - Yeah, I'm a sucker for Papa Gepetto. But there's something so touching about this story even now. And I remain a big fan of Jiminy Cricket and 'When You Wish Upon A Star'. Lovely moment. This Disney film is remembered, I think, for the touches of darkness inherent in the Pinocchio story - the debauchery on the island of lost boys. (I think that's what it's called in the film.)The eventual redemption of Pinocchio and the moment when he is made 'real'. Not a film for very little kids.
DUMBO (1941) - Okay, I am obviously a lost cause. But I love this film, still. I cry, always, when Dumbo's mom, in chains, caresses her boy with her long trunk. I worry, still, that something dreadful will happen to her - knowing now and perhaps even then, the plight of elephants in circuses around the world. "But I guess I've just seen everything when I've seen an elephant fly." Love the singing crows on the phone wire befuddled by the little elephant. A film I would not take very small children to see, either. The separation of mother and child is just too harrowing.
PETER PAN (1953) - I did mention that perhaps, I have adulthood issues. My favorite scenes in this film are in the first half, the London half, the rest of the film I tolerate. Though I love the scene with the mermaids in the lagoon and I absolutely love Captain Hook. I have his figurine on my desk and it makes me smile every time I see it. The alligator gives me a chuckle too. But the scene of Peter and the Darling kids flying over London is so beautiful I could watch it over and over and over again, humming the music I've never forgotten. That makes the film for me.
ONE HUNDRED AND ONE DALMATIANS (1961) - Great story, even if just the slightest bit unbelievable. Coats from Dalmatian skins? C'mon....No! Really? Cruella DeVille is one of the great film villains, bar none. I even liked Glenn Close in the live actor version of a few years ago. She really gnashed her teeth in that one. Very fun. My favorite scenes in the animated film? The midnight bark sounding across the English countryside at night. I hear that bark now and then, when the dogs in my neighborhood pick it up and I always wonder what they're announcing. Terrific film.
TOY STORY II (1999)- There are not many of these computer animated films on my list simply because I don't like computer animation. For me it always gets in the way of the story. When it works, as it does wonderfully in this second of the Toy Story films, it works very well indeed. But I have a feeling it's probably because the script for this one was so good. I haven't seen TOY STORY III, but I've heard great things about it.
SHREK (2001) - What's not to like about this? The voices are perfection. The animation okay. It's the music and the speaking voices that carry the day though. Just an exuberant film full of puns and fun, not to mention a spoonful here and there of satirical wit. Fairy tales have never had it so good. (Or maybe I should say, 'bad'.) 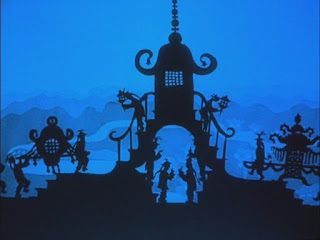 THE ADVENTURES OF PRINCE ACHMED (1928) - Lotte Reiniger - Germany
I saw this only a couple of years ago on pbs and could not believe my eyes. The entire film is silent, the story told in silhouettes - paper cutouts. AMAZING and beautiful and incredible to watch. A true work of art. If you can find this online or elsewhere, I urge you to see it. 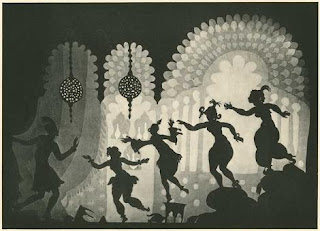 MY NEIGHBOR TOTORO (1988) This recognizable style of animation is out of Japan - the films all feature a similar look and 'feel'. Some work this much better than others. I stumbled unto a few of these films by accident but damn if I can remember where and when. I have a feeling it was during one of Turner Classic Films' monthly 'memes' MY NEIGHBOR TOTORO is a particularly good one, though it has that same typical 'manga look'. These films usually feature small children or young teens who are having some sort of family trouble and are alienated from something or other. The only way out for these kids seems to be with the help of an often benevolent fantasy figure. Some of these films feature a dystopian view of the future and can be a bit unsettling and not really for small children. MY NEIGHBOR TOTORO takes place in the rural (and beautifully realized) countryside of Japan where a father and his two young children have gone to be near the hospital where the mother is languishing of some unspecified illness. 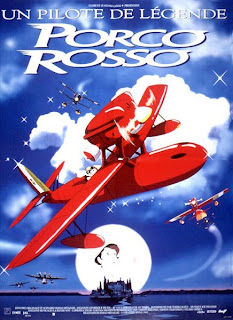 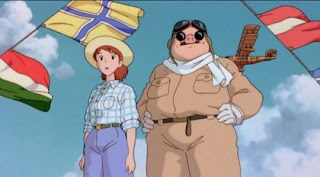 PORCO ROSSO (1992) - Another Japanese film I enjoyed very much. (This is possibly my favorite of this style of animation.) It features a kind of pig who is a WWI flying ace (really a man with the face of a pig - don't ask, it's never explained). The film follows the high flying adventures of its disillusioned 'hero' who is now a bounty hunter guarding shipping lanes from pirates. A delightful, bittersweet and often nonsensical film very well done.

I realize I've left a lot of films off this list, but I've only chosen from films I've ACTUALLY seen and while there are other animated features I may have affection for, there aren't many I would willingly sit through more than once or twice, now. Sacrilege as it may seem, I am not a big fan of RATATOUILLE or THE INCREDIBLES (Contrary to popular opinion, I found THE INCREDIBLES incredibly boring except for the little Edith Head character). Of this spate of films, I preferred FINDING NEMO and ROBOTS, though not enough to list them as very favorites.
I haven't seen UP or BOLT or the last SHREK or, as I said, TOY STORY III. I expect to like these based on their reviews, but you never know. I am not really REALLY fond of computer animation. I much prefer the hand-drawn stuff.
If you have a moment, check out the ASIFA Hollywood Animation Archives for lots of interesting stuff about the art of animation and other related topics.
Posted by Yvette at 1:57 PM