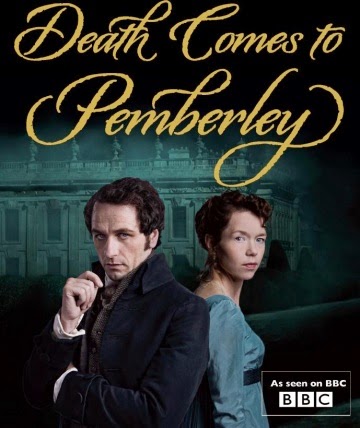 Just finished watching Episode One on the PBS (available until Nov. 2nd, I think) website. DEATH COMES TO PEMBERLEY is based on the book by mystery great P.D. James. A book I'd very eagerly looked forward to because, after all, P.D. James created the Commander Adam Dalgliesh books, ipso-facto, this Jane Austen pastiche had to be good.

Boy was I wrong. The book is dreadful.So bad I couldn't even finish it. But I won't go into details here. I wrote about my disappointment earlier this year and that's enough.

Somehow I though the television film would have to be better than the book. Right? PBS. Masterpiece Mystery. Matthew Rhys. Need I say more?

Gee whiz, I was wrong again.

If this first episode is anything to go by, I won't be watching the second or the third. This is dreary stuff, limp and uninspired, even hard to understand. The production is abysmally cast with people whose accents don't seem to be quite the proper thing. Several of them sound almost American in tone and we know they are Brits. The dialogue has no crispness, no Austen tone at all. This is Regency England or at least, a few years past the Regency - mid-19th century. So what gives?

The casting is so entirely wrong. Even Matthew Rhys seems not able to live up to Pemberley, that glorious house. Actually, the house itself is the best thing about the production. The camera-work is wonderful too and the scenery. But ladies and gents, that's not enough.

In comparison to the superb PRIDE AND PREJUDICE (1995) starring Colin Firth and Jennifer Ehle and an incredibly fine cast, this production is just lame. There I've said it. Lame and boring.

Anna Maxwell Martin (who is wonderful in THE BLETCHLEY CIRCLE) is entirely miscast, lost in the part of Elizabeth Bennett Darcy. She looks haggard, not at all lovely, her costumes so ill-fitted they make her look less like the lady of the manor and more like a downstairs servant. In one scene she is wearing this dreary hat that any housemaid might wear and wearing it askew - didn't someone notice? She looks NOTHING like the Elizabeth Bennett so wonderfully played by Jennifer Ehle. I'm talking about the character's style and zest. In comparison, this Elizabeth Bennett looks like a washerwoman.

But the rest of the lackluster cast including the Bennett mother, father and sisters are no better. Who are these people? You'll note that I don't bother to name names. One is hard put to differentiate between them.

Matthew Rhys as Darcy is nice to look at but a bit too rugged in my opinion, not refined enough, and hardly seems in command of his surroundings.

What ever happened to the delightful Miss Bennett? Has marriage to Darcy turned her into a drudge?  From the first she appears to be wearing the same ugly green dress for an entire day - morning to night, even though company is expected - a ball is planned at Pemberley.

Later, sister Jane shows up in an outfit almost the same color as Liz's - they blend into each other - something that I would have thought was a costume design no-no. The men's neckcloths and linen appear damp and soiled and not at all the sort of thing that would have been worn by people of this social class. Yes, it's the country, but really, would they have all looked so sloppy?

What the heck happened here? Did they run out of money? Attention to detail, the niceties of costume and language are the main reasons we love these sorts of things. When all that is missing all that's left is soap opera  - and not very good soap opera at that. Oh yeah and there's a murder. But the guy who's killed is no one we have any emotional interest in. So from the first we're hampered by lack of connection.

I simply had to write this tonight. I'm sorry to be so harsh, but I was SO disappointed. I hate when that happens.