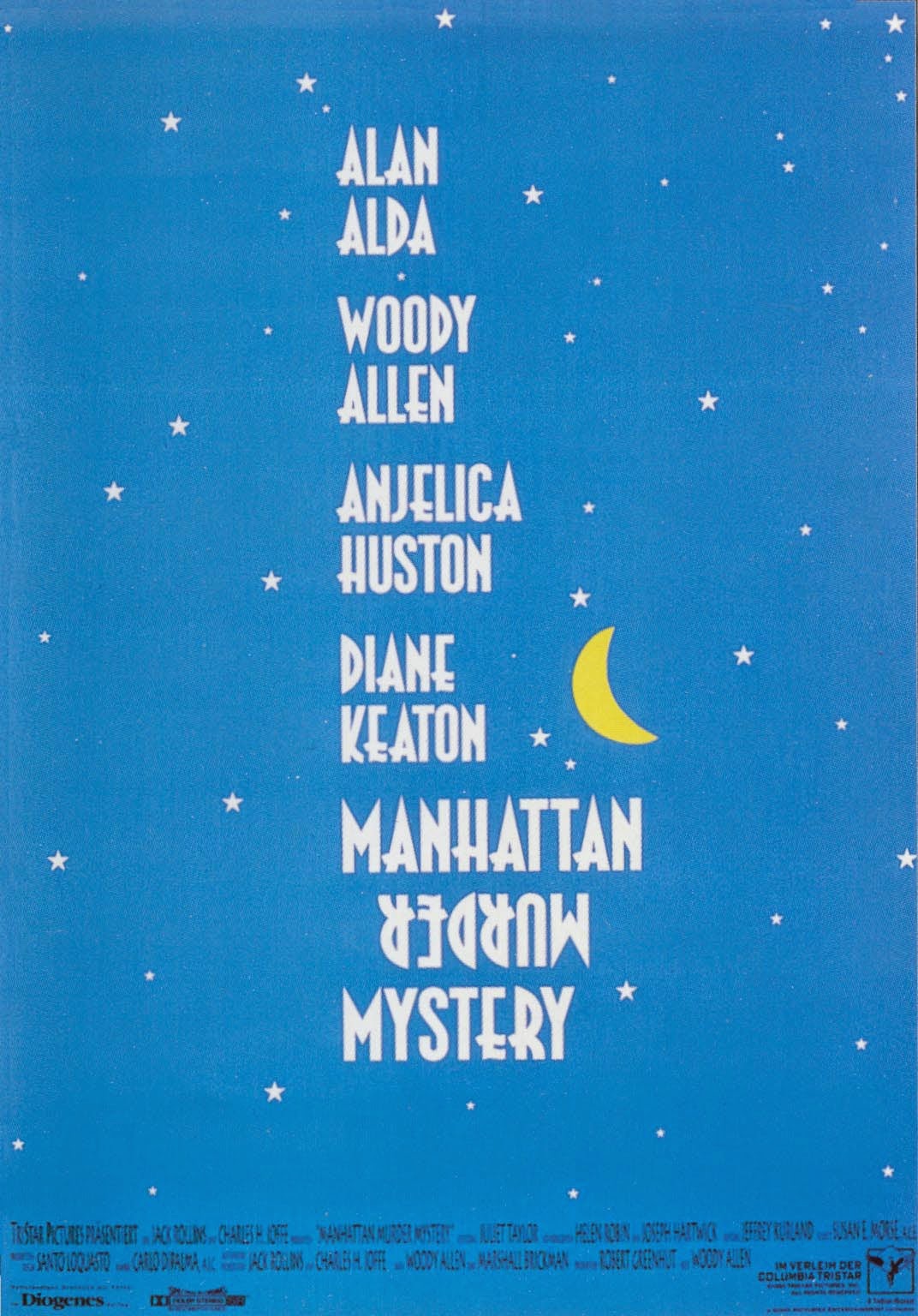 I am not a Woody Allen acolyte but I do love New York and I do love mysteries. Though at first I didn't love this film, thought it too meandering around the plot as usual with Woody Allen. But after reading Dorian's wonderfully adoring review of MANHATTAN MURDER MYSTERY, I decided to give it another look-see.

Lo and behold, I am now a convert. I do love this movie even with its meandering faults. Thanks be to Dorian. 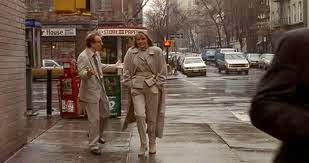 The big attraction for me, of course, is the setting: Manhattan. The streets, the restaurants (even the famed 21 Club where I (trying not to gawk) once attended a business lunch alongside Helen Gurley Brown, my boss the fashion editor, and several other important business types), the ambience of the film is all so wonderfully New Yawk as I remember it from having spent a good portion of my life there. I love that Allen always shows people walking and talking on location, on the streets of the city. (Well, he lives there, so he should know the best locations I'd think.)

In fact, the murder in the title takes place inside a comfortable Manhattan high rise. (The sort with an awning and a doorman.) On the case are Carol and Larry Lipton (Diane Keaton and Woody Allen) who are, conveniently, neighbors of the murder victim. 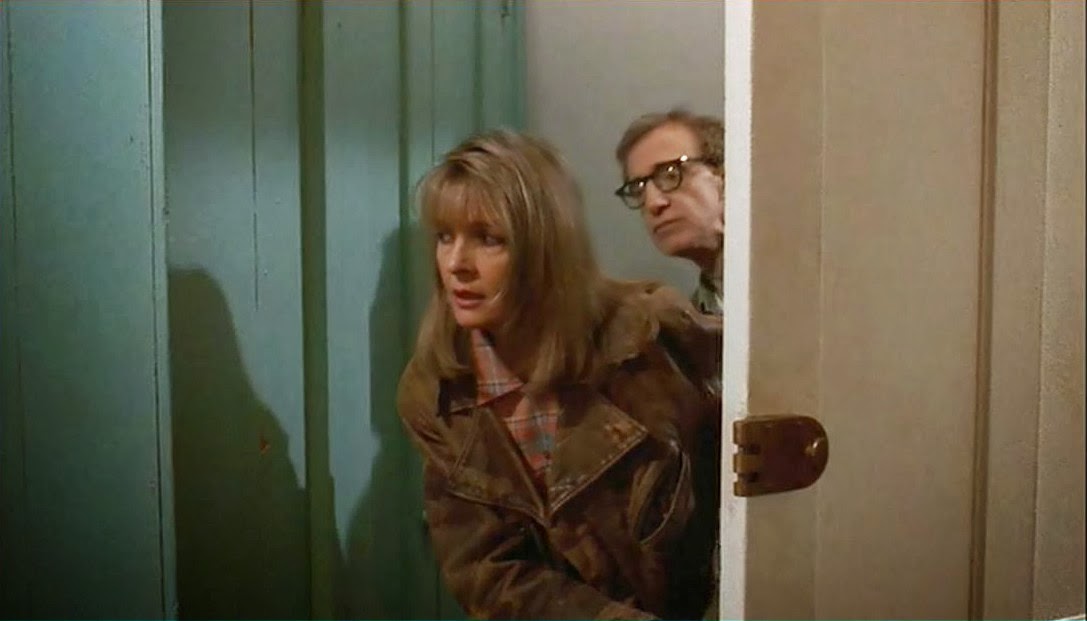 At the beginning and in oh-so-typical Woody Allen style, Larry is all over jittery and reluctant to get involved, Carol is the one who thinks murder is afoot even when everyone else (including the cops) assumes the victim died naturally of a heart attack. But Carol can be persuasive and after many at length conversations, the couple is drawn into a series of fumbling sleuthing adventures which are, in a low-key comedy kind of way, fun to watch. 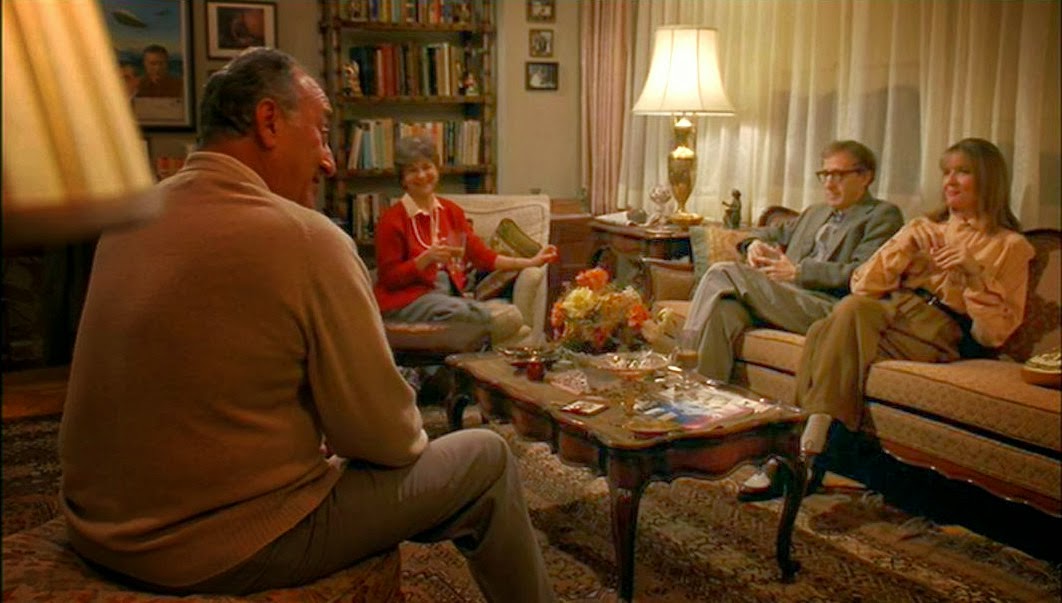 Larry Adler, Lynn Cohen, Woody Allen and Diane Keaton - the evening before the murder most foul.

An elderly couple, Paul and Lillian House (Jerry Adler and Lynn Cohen) are the neighbors which capture Carol Lipton's nosy (let's face it) interest. When Lillian suddenly dies of a heart attack, Carol is suspicious though it was a known fact that Lillian had a heart condition. After much discussion (lots of smart New Yawkese talky-talk going on in this film), with Larry and with skeptical friends, Carol manages to come up with a couple of clues and drags the still VERY reluctant Larry (he'd rather mind his own business in typical New York fashion) into the mix. 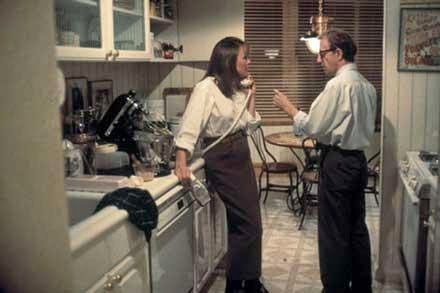 That's the plot. Not exactly earth-shattering, but intriguing enough. It's the sort of tale that works best, I would imagine, if you've ever lived or visited New York and gotten a hint or two of the flavor of the city. The 'flavor' of the city is what Woody Allen does best. He knows these sorts of people, he understands the workings of the city and its many well-heeled professionals. 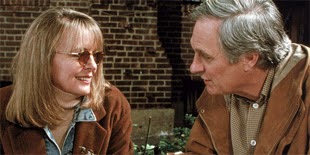 Though Alan Alda is not my first choice when I think of Manhattan, he actually fits right in as Ted, a friend of the sleuthing couple. Ted has a roving eye on Carol - she, well aware of it, doesn't reciprocate though I don't see how she could not be tempted - I mean, Woody Allen. 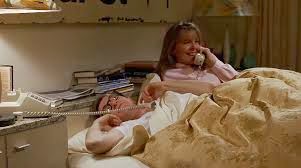 By the way: someone explain to me the coupling of Diane Keaton and Woody Allen. Please. Although they look funny enough together on screen (and did in real life). It still takes a bit of work for me to accept that Carol would walk down the aisle with Larry.

But maybe he makes her laugh.

Since this is Tuesday, don't forget to check in later with Todd's blog, Sweet Freedom, to see what other forgotten (or overlooked) films, television or other audio/visuals other bloggers are talking about today.
Posted by Yvette at 3:49 PM