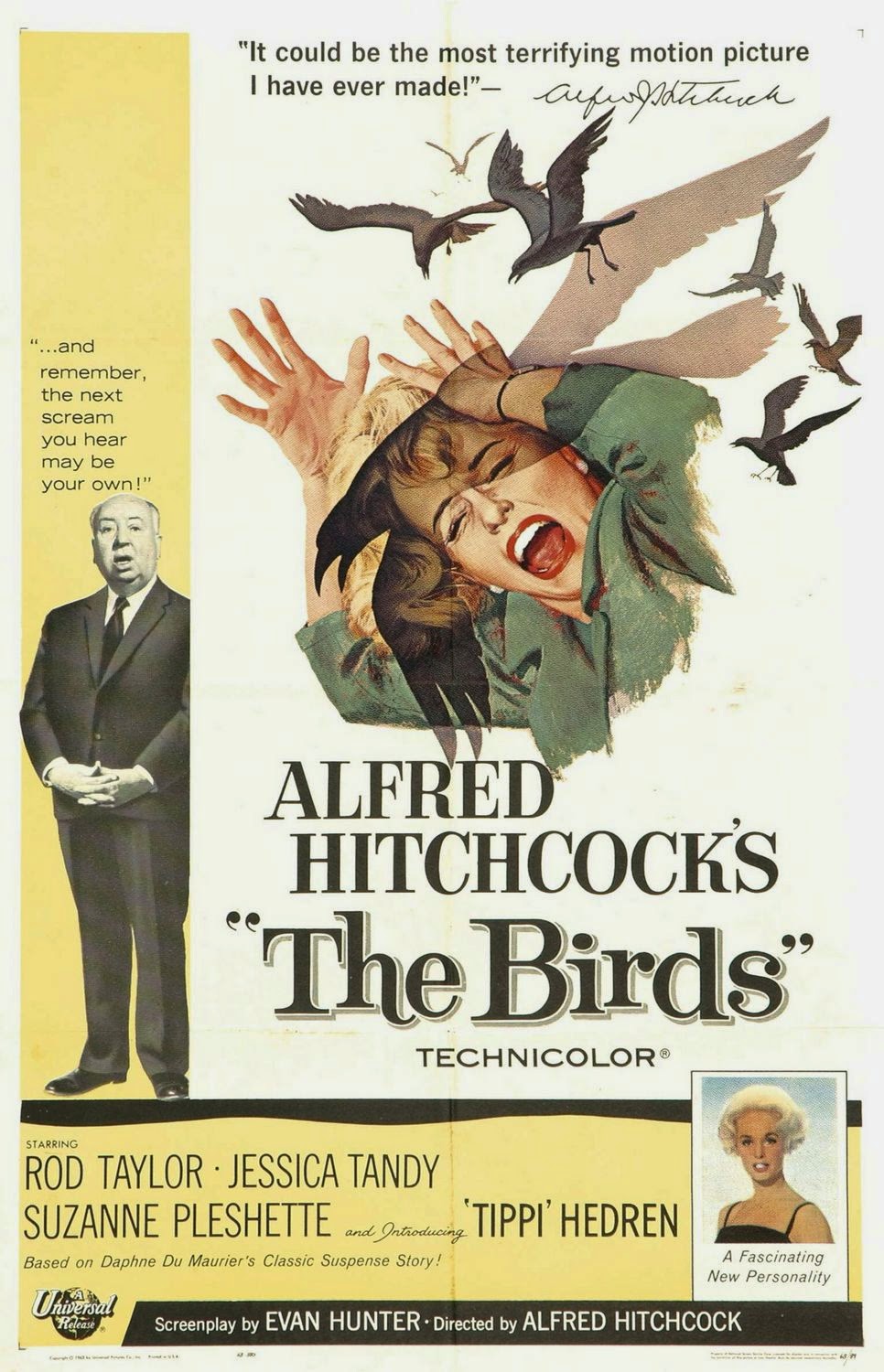 Not a film that is 'officially' forgotten, for sure, but what the heck. It's one of the more perfect Chilly October viewing pleasures and always worth talking about. In fact, I can envision a Halloween party with everyone dressed as one type of bird or another, all siting around eating wings (ha!) and watching the Hitchcock classic - although perhaps the liquor content should be kept to a minimum lest some birds get carried away with the film's theme of anarchy and destruction.

At any rate, THE BIRDS (1963) is directed by Alfred Hitchcock, from a screenplay by Evan Hunter based on a story by Daphne Du Maurier and starring Rod Taylor, Tippi Hedren, Suzanne Pleshette and Jessica Tandy. It is a film that these many years later, still retains the ability to shock and awe. The gifted Hitchcock, more a master of mystery, suspense and spy thrillers and not especially known for this sort of thing - special effects and 'end of the world' scenarios - still manages to adorn THE BIRDS with his own peculiar touches in between murderous avian attacks.

Haven't seen the film recently, but sometimes that's the best time to write about a movie -  I've been thinking about various scenes which have remained (despite old lady memory) in my mind. It's funny how that works, some movies you forget completely - or almost - others, like THE BIRDS, continue to live for one reason or another.

THE BIRDS: Sounds and sights I remember (off the top of my head).

Playful Hitchcock: The pet shop scene in the beginning with the two quiet little parakeets (or canaries) in a cage. So sweet. So non-threatening. Not happy to be caged, but surely...

The blond society deb, Melanie Daniels (Tippi Hedren), spontaneously deciding to follow hunky Mitch Brenner (Rod Taylor) - wouldn't you? And into the pet shop they go. She, assured of her icy allure, he instantly intrigued by it. In Hitchcock films, blonds get away with all sorts of forward behavior.

But what is is about sleepy Bodega Bay, California that attracts the sudden influx of avian life to its shores? Curiously, down near the water, a bunch of sea gulls seem to be holding a class reunion.

Speaking of classes, there's the scene of a bunch of screaming kids being sent home from school - chased by birds. Horrific. Children in a Hitchcock film are rarely safe.

Remember the jungle gym covered in birds perched and waiting?

Then there's the brunette (and therefore automatically sultry) Annie Hayworth (Suzanne Pleschette), small town Bodega Bay teacher who resents the influx of a sophisticated deb with eyes for the guy she's got a crush on. Poor Annie. Her gruesome death I've always seen as more a Hitchcockian comment on brunettes with romantic dreams than anything else. I mean, how dare she aspire to the hero when Tippi (with a decidedly elegant French chignon) is in town?

The vivid gas station explosion which, to my mind, suddenly catapults the film outward in a very vivid way makes for an unforgettable scene. Hitchcock knew that fireworks would be required at some point and this comes out of the blue.

Later, the barricading of the cozy, private house (Jessica Tandy lives there for goodness' sake!) against the assaulting forces of nature. The birds in the chimney. Beaks piercing through the wood door. Obviously more is at work here than just birds run amok. But what?

Yeah, pretty good stuff and I'm really happy that, far as I know, this is one film that hasn't had a modern day re-do.
(See Di's comment below for additional data on that score.) 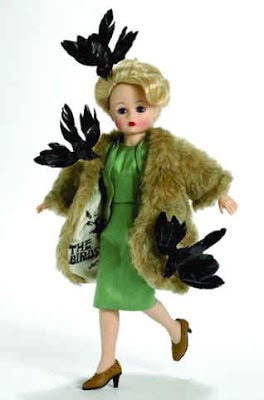 
Sometimes you just have to shake your head.

Since it's Tuesday, don't forget to check in later at Todd Mason's blog, Sweet Freedom, to see what other Forgotten and/or Overlooked Films, Television or other Audio/Visuals, other bloggers are talking about today.
Posted by Yvette at 12:30 AM