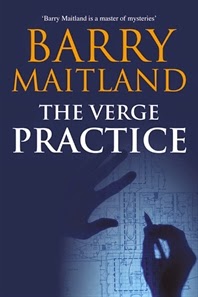 Detective Chief Inspector David Brock and Detective Sergeant Kathy Kolla of Scotland Yard are the appealing duo of Barry Maitland's terrific police procedural series which I've just recently begun reading. I'd read one out of sequence (the excellent NO TRACE) a couple of years ago and always meant to go back, but you know how that goes.

The truth is that I've discovered that the books don't have to be read in sequence, anyway, so wherever you begin is good.

Author Barry Maitland was born in Scotland, grew up in London and now lives in Australia. He was a Professor of Architecture at a university there and has since retired from teaching to write full time. This intriguing series set in England, is the happy result. David Brock and Kathy Kolla are an effective team even if they often work separately and Kolla has a seeming penchant for placing herself in danger. There is no romance between them as Brock is quite a bit older than Kolla whose own love life seems to be of the hit or miss variety. (One does wish she'd settle down with 'the right man' but then it wouldn't be a 'modern' sort of series.)

I've lately been in the mood for 'thumping good reads' and THE VERGE PRACTICE is a perfect example - it is imaginatively conceived and executed, the sort of book which draws you immediately into its midst and doesn't let up until the very end (an ending which will definitely leave you wanting more).

I urge you to read this enticing (if slightly far-fetched) thriller even if it is the seventh entry in the series. Trust me, you will not be missing anything important as each book is more or less self-contained. The 'far-fetchedness' I mention is not a fault - it all depends on how likely you are to accept that an ace can be palmed right in front of your face by a very fine magician - metaphorically speaking. There - I can say no more.

When a young wife is found murdered, the husband, naturally enough, is the first suspect. Most especially since said hubby, the famed architect Charles Verge, has disappeared without a trace. The police remain stumped as to his whereabouts. The high profile case draws to a standstill.

It is several months later when Brock and Kolla are asked to delve into the cold case. Expediency is paramount as a brand newly finished prison designed by the missing architect is scheduled to be opened with great fanfare. But if Verge is, indeed, a murderer than his work can't be lauded by personages of the Royal sort, but if it can be proven that Verge is dead, a victim alongside his wife (as his rather imposing mother insists), then all is forgiven and the prison (acknowledged to be Verge's finest work) can be unveiled with proper pomp and circumstance.

As Brock and Kolla delve into the case with fresh eyes, they almost immediately come up with a small something overlooked by the previous detective team. You and I both know that there are no small somethings when it comes to a murder investigation and this first lead in a heretofore unfathomable mystery will soon draw the current investigative team into an even bigger conundrum.

We're in the middle of a case in which nothing is as it first appears, nothing is to be taken at face value. Just when you think you've figured it out, trust me, you haven't. All I can say is that the denouement is a doozy, unlike anything I've ever read before.

A terrific book in keeping with our Chilly October Reading theme.

Link to Barry Maitland's Fantastic Fiction page for a complete listing of his books. Other Barry Maitland books I've read and highly recommend: THE MALCONTENTA, THE CHALON HEADS, SILVERMEADOW, NO TRACE, DARK MIRROR.

And don't forget to check in at Patti Abbott's blog, Pattinase, to see what other Forgotten or Overlooked books other bloggers are talking about today.