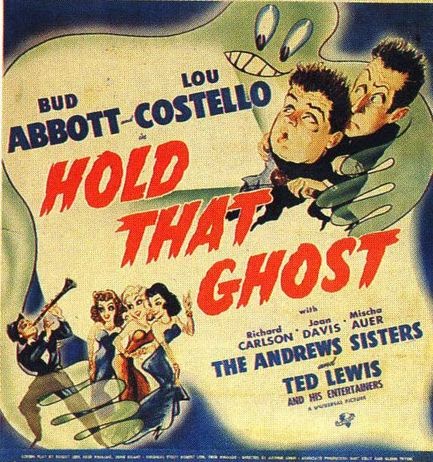 If you have low tolerance for foolishness, you probably won't like this film much. But if you're feeling indulgent and you have an idea of how Abbott and Costello get on, this is a fun film to watch on a chilly October eve, with maybe a plate of accompanying vittles and a hot chocolate.

HOLD THAT GHOST (1941) is an RKO film directed by Arthur Lubin and starring the once upon a time famed comedy duo of Bud Abbott and Lou Costello who are an acquired taste which you may not have acquired unless you too grew up watching them on television. Their brand of comedy is of the slapstick variety with Costello (the chubby one) being on the receiving end of many of Abbott's occasionally cringe-inducing slaps and digs. It takes getting used to. But when we were kids we thought it was hilarious. 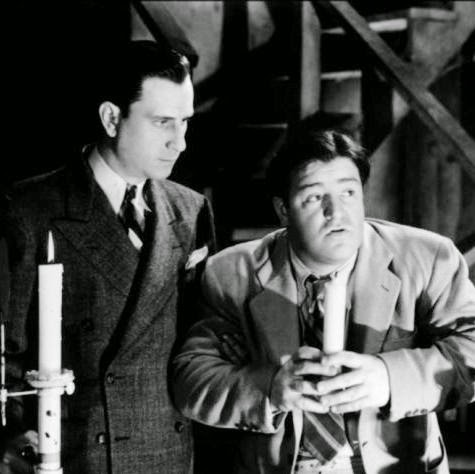 That being said, some of their schticks are still funny and I've always had a secret liking for this particular film and for ABBOTT AND COSTELLO MEET FRANKENSTEIN (1948) (which I think is their best) and ABBOTT AND COSTELLO MEET THE KILLER, BORIS KARLOFF (1949) and WHO DONE IT? (1942). Obviously there's a theme going on here, admittedly I'm not a fan of the Abbott and Costello movies NOT featuring a mystery gimmick of some sort. The exception to that rule would be THE TIME OF THEIR LIVES in which Lou Costello played a ghost left over from the Revolutionary War and Abbott played a modern day psychiatrist - although maybe playing a cowardly ghost could be considered gimmicky enough.

In HOLD THAT GHOST the pair are up to their usual idiocy playing two numb-skulls who go from inept waiters, to inept gas station attendants to inept inheritors of a gang-land chief's road house: a spooky old place in which it is rumored, the dead guy hid all his money. Such a strong rumor naturally enough lures all sorts of bad-guy types to the house looking for the dough on a dark and stormy night. 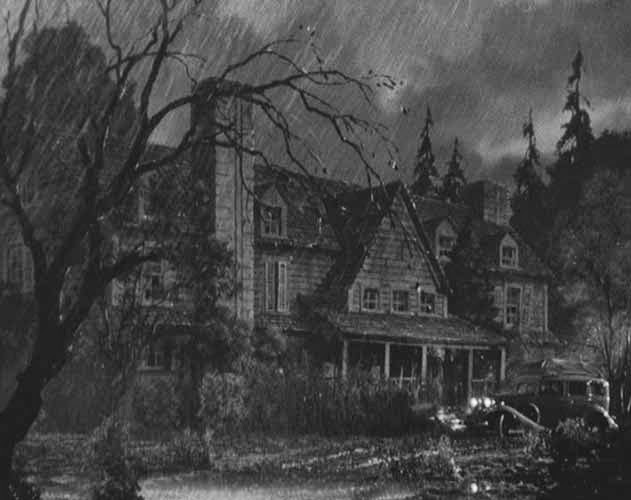 Chaperoned by Charlie Smith (the very long-lived, sneery-faced actor, Marc Lawrence) playing a crooked lawyer's henchman (the first to die of course), and three travelers (Evelyn Ankers, Joan Davis and Richard Carlson) Lou and Bud are soon up to their ears in spooky doings and dead bodies. The famous 'candle scene' alone is worth the price of admission which, since you can watch the film for free at the link below, amounts to zip, but you know what I mean.

And as if that weren't enough, in the end you get a nifty song and dance number from the Andrew Sisters, "Is it me or just my money...oh, oh, oh, Aurora."  FUN.

Since it's Tuesday, don't forget to check in later at Todd Mason's blog, Sweet Freedom, to see what other forgotten (or overlooked) films, television or other audio/visuals other bloggers are talking about today.
Posted by Yvette at 12:30 AM

Email ThisBlogThis!Share to TwitterShare to FacebookShare to Pinterest
Labels: Abbott and Costello, Hold That Ghost, Movies