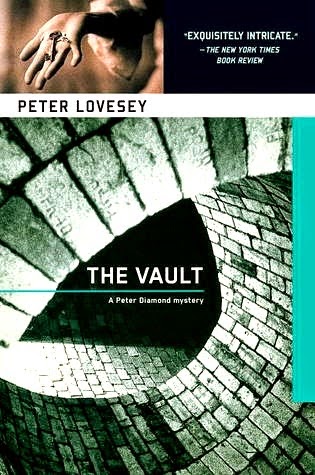 It's a funny thing, but I don't have much affection for Lovesey's main protagonist and I really feel for his underlings who often receive the brunt of his short temper. He is Detective Superintendent Peter Diamond of the Bath Police aka 'the murder man' as he refers to himself. I find the unkempt Diamond unpleasantly curt, a bit too churlish, and all together not my cup of tea. Though admittedly he does occasionally have moments of likability, those moments are few and far between.

Yet I do like and recommend the books which, in my view, is a tribute to prolific author Peter Lovesey's writing and plotting ability, even if his characterization of Diamond takes getting used to. But then, I suppose, being a hardened bloodhound is not necessarily a job for nice folk. Even if Bath, England doesn't jump immediately to mind when one is thinking of murder capitals of the world - apparently even this ancient and beguiling city has an underbelly of unsavory crime.

The setting resonates with me (I was fortunate enough to visit Bath years ago - it is a splendidly beautiful place) and I like that once in a while the historic Roman Baths (for which the city is named) come into play as settings for murder and whatnot.

And I do especially like the older SoHo Press editions of Lovesey's books. They are just the right size for night time reading.

THE VAULT is a particularly flavorful murder tale with a nice creep quotient - something which doesn't necessarily resonate in all the Diamond books - but which makes this an excellent choice for the month of October. The story features two murder investigations which, in the end, converge, sense is finally made of senseless notions and clues as Diamond sorts out the truth and we even learn a little literary history in the bargain.

In the beginning were the bones. Yes, some bones are found buried in concrete in an underground vault under The Pump Room, a vault with was once part of a demolished building next door. Don't you love it when a mystery begins with newly discovered bones? I do. But here's where it gets even better: turns out that the long forgotten demolished building was the one in which Mary Wollstonecraft Shelley wrote most of her manuscript for FRANKENSTEIN. Who knew? Well, apparently nobody in the story does know, except for a book collecting American professor traveling in Bath with his wife and eager to discover the provenance of a book he's recently acquired which features Wollstonecraft's inscription and address.

Once the press learns of this bizarre coincidence - bones being discovered under the house where the most famous monster tale of all time was written - well, you can imagine the furor. (And Detective Superintendent Diamond's disgust, except when lunching at the Pump Room Restaurant - perks of the current game.) But when a tourist goes missing and another murder is added to the mix along with an inquisitive female reporter who yearns to be a cop, an enigmatic puppeteer, several unknown watercolors purportedly by William Blake, the writing box of Mary Wollstonecraft Shelley and an especially galling attempted murder, it all makes for a very entertaining tale of death and chicanery.

Along the way we also find out that the Hollywood version of FRANKENSTEIN had little to do with the literary version and that Mary Wollstonecraft scandalously married the poet Shelley just two months after the suicide death of his first wife, Harriet. (Of course, Mary had already borne Shelley a child. Despite what some would have you think, the Regency world was not all Jane Austen manners and propriety.)

Friday's Forgotten (or Overlooked) Books is a weekly meme hosted by Patti Abbott at her blog, Pattinase. Don't forget to check in and see what other books other bloggers are talking about today.
Posted by Yvette at 12:30 AM