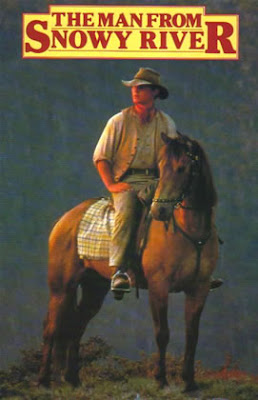 THE MAN FROM SNOWY RIVER (1982) is a film directed by George Miller based on a poem by A.B. 'Banjo' Patterson and written by Fred 'Cul' Cullen and John Dixon. It stars newcomer Tom Burlinson and Kirk Douglas.

If you, like me, thrill to the vision of men on horseback riding across the screen accompanied by sweeping romantic feel-good music (by Bruce Rowland), then this is the film for you.

Aside from the beautifully rugged Australian scenery, I can't really think of anything else to recommend this movie except for the scenes of competent men who know their expert way around a horse or two. But hey, that's often enough for me. (You knew that - right?) 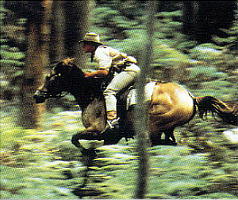 I love the term: Master of the Horse - which is used in the credits at the end. PLENTY of horses used in the film meant plenty of work for such men.

Tom Burlinson as Jim Craig, the soft-spoken leading man (in, I believe, his first major role) is engaging enough as the young hero, but it is his wondrous way with a horse that won my admiration. I find it very hard to believe that the actor, a riding neophyte, had to be taught to ride before the start of filming. Obviously Tom Burlinson is a very quick study, his mastery is superb. Anyone seeing him on horseback would immediately assume this young man had been riding all his life. 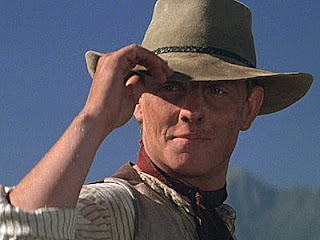 Here's the story: Jim Craig has spend most of his 18 or so years up in the hills on his father's secluded farm. But on his father's death, he has come down to the lowlands to earn enough to get the family farm back on its feet.

He hires on at a large ranch (station) owned by the wealthy and overbearing Harrison (Kirk Douglas) who, of course, has a pretty daughter to catch Jim's eye.  Harrison and his men look their noses down at Jim, a mere rustic boy of the mountains yet to prove his mettle as a man. Jessica Harrison (Sigrid Thornton) likes the look of him - as we knew she would. This is something her father doesn't take kindly to. 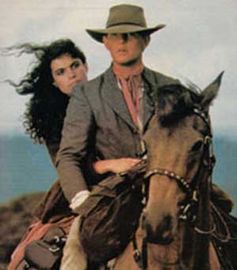 Taking an instant dislike of Jim, Harrison is ready to accuse him of allowing a prize colt to run loose and fires him. 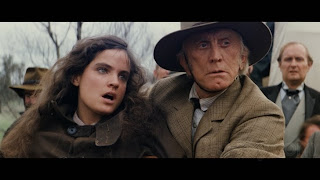 The main weakness of the film is an entirely unnecessary secondary plot coupled with the overwrought performances of Kirk Douglas in two roles. First as the American ex-pat rancher Harrison then as his twin brother Spur: a no-account one-legged miner (very much in the Gabby Hayes mold) still searching for his pot of gold. (Though in the film he, at last, appears to have found some vein or other of gold up in the hills.)

The two men have not spoken for twenty years and Harrison claims to have no brother at all. As the rancher, Douglas is a stiff-necked, unlikable boor without a glimmer of fatherly love or even for that matter, any glimmer of likability. As the miner he is a character straight out of an early Walt Disney film. (Turns out that long ago Spur and his brother were both in love with Jessica's mother but really, who cares?) Douglas over-acts to the point of embarrassment. In effect, he ruins the film with his ham-bone antics. It is a disastrous bit of casting. I always fast-forward through his scenes.

But then, why am I recommending this movie?

Well, there is that gorgeous Australian mountain scenery. And, as it turns out, there is a 'mob' of wild horses (called 'brumbles') with whom the prize stallion has been seen running. So Harrison decides to send his hands to round up the wild horses trying to exclude Jim Craig who, we are given to understand, is the best horseman of any of them. But Harrison remains blind to Jim's charms. Though eventually, grudgingly, he allows that Jim may follow along if he chooses. (Big of him, I know.) 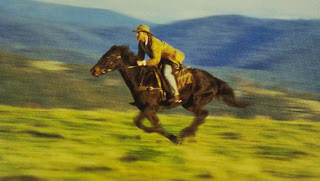 At any rate, here is the raison d'etre for viewing this movie: the scenes of rugged men on horseback riding hell bent for leather across the Australian outback at breakneck speed. All filmed quite beautifully on location. I've been a fan of this sort of thing since I was a kid growing up in the city. It always seemed both reckless and magnificent to me. But if you don't feel the same, forget about this movie. 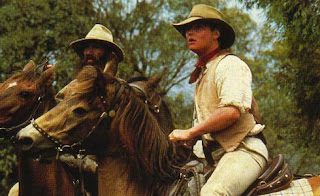 There is one grand, hair-raising scene of Jim Craig and his horse careering down a steep slope of mountain that makes for as thrilling a few bits of film as any I've ever seen. I held my breath the whole time. This scene alone makes the film worthwhile. 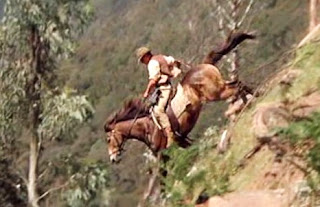 The ending is also very satisfying. Harrison's exhausted riders have abandoned their quest and downhearted, head back to the ranch without the 'brumbles'. But Jim later shows up (cracking his whip) with the 'mob' of horses in tow much to the chagrin of Harrison and the admiration of his men, not to mention Jessica, the boss's daughter. Though Harrison will never agree, as far as Jessica and the ranch hands are concerned, Jim Craig has proved his mettle.

If you'd like more details about the plot, check out the Wikipedia page. 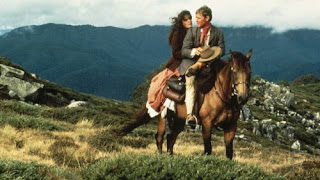 And don't forget to check in at Todd Mason's blog, Sweet Freedom to see what other Overlooked or Forgotten Films (or Audio/Visuals) other bloggers are talking about today.
Posted by Yvette at 10:00 AM