Book Review: SPEAKING FROM AMONG THE BONES by Alan Bradley 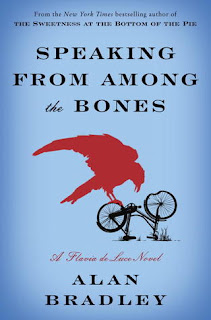 1) THE SWEETNESS AT THE BOTTOM OF THE PIE

2) THE WEED THAT STRINGS THE HANGMAN'S BAG

3) A RED HERRING WITHOUT MUSTARD

4) I AM HALF-SICK OF SHADOWS

5) SPEAKING FROM AMONG THE BONES

6) THE DEAD IN THEIR VAULTED ARCHES

As you can see, the titles of award-winning author Alan Bradley's 'Flavia' books are as intriguing, well, almost as intriguing as his main character: an eleven (or possibly twelve) year old prodigy-sleuth with the unlikely name of Flavia de Luce.

I've read them all (except for the last title due out soon, if not already) and never tire of recommending this series set in 1950's England. The English countryside (in and out of fiction) is endlessly fascinating to me so that might have something to do with my affection for these books. But if the writing weren't so top notch and I didn't like Flavia so much, nothing would induce me to keep reading. You know how merciless I can be.

Canadian author Alan Bradley is able somehow to write from the point of view of a precocious eleven year old girl, that in itself is a kind of miracle and a very special talent. But this is no ordinary 'child'. First of all, Flavia is brilliant, second of all she has a penchant for poisons and messing about in an old family laboratory on the top floor of Buckshaw, her family's large ramshackle house. Third of all, she is very adept at solving crimes which occasionally occur in the small village of Bishop's Lacey - a seeming hotbed of murder and nasty doings.

But no matter what mysteries happen around her, Flavia remains a young naive girl, wise in certain ways, but often bewildered by grown-up actions. She is never someone pretending to childhood - her voice is true. She IS a child in many of her thoughts, comments and occasionally her conclusions - but a child who just happens to be a science prodigy. Much to the chagrin of the local constabulary.

It is the 500th Anniversary of the death of Saint Tancred whose bones are buried in a vault within the local village church. Flavia, curious as ever, is anxious not to miss the planned excavation of the saint's bones. Along with her faithful bicycle Gladys, mute witness to all her adventures, Flavia is determined to watch the midnight doings down at the church - a determined Flavia is a small force of nature.

Sneaking around at night is a common enough occurrence for our heroine since she sleeps in a separate wing of the house (near her handy chemistry lab 'inherited' from a great uncle) away from her two older sisters (of whom the less said, the better) and her distracted father, a sad widower who seems only interested in his stamp collection. As a result of her lonely family life in a decaying pile of bricks about to be foreclosed upon (the tax man must be obliged), Flavia is pretty much on her own, left to find her own entertainment. There is an inchoate sadness in Flavia which adds depth to her character and explains some of the willfulness of her behavior. This is a lonely young girl who, nevertheless, is eager and determined to make her existence worthwhile.

So it is not at all unusual that she is on hand in the dead of night when the body of the church organist is discovered in St. Tancred's vault. It's Flavia on the case when no one can figure out how the man was killed or for that matter, why.

With Gladys in tow, the inventive Flavia is off and running.

Now if only Flavia's willfully stubborn father will sell the Shakespearean folio found in his library and pay off the damn taxes on the house! Oh wait, isn't there a jewel that is part of a long-lost de Luce family inheritance? A historic jewel discovered by the dead organist? Hence his untimely death?

The book has a cliff-hanger sort of ending which makes me wish I had the next book clutched in my hot little hands.

This is series that probably should be read in order, though reading the first two will set you up for the rest quite nicely.