Tuesday's Overlooked (or Forgotten) Film: THE WIND AND THE LION (1975) starring Sean Connery and Candice Bergen 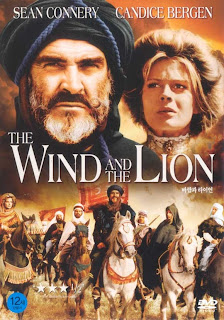 THE WIND AND THE LION (1975) was written and directed by John Milius and stars Sean Connery, Candice Bergen and Brian Keith.

I simply cannot be sensible about this film. So pardon me while I gush. I KNOW it's all romantic Hollywood nonsense very loosely based on a little known incident in American/Moroccan history which took place in 1904, but Sean Connery wrapped in a black keffiyeh, cloak and boots, just about makes me swoon. 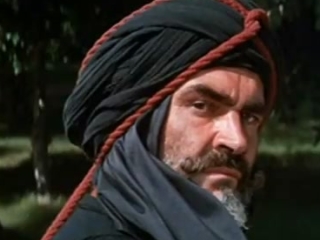 I don't care that sometimes his Scottish accent is audible. I don't care that his men kill off a bunch of embassy staff in the beginning and kidnap an American woman (widow of a diplomat) and her two children - he has his reasons. I don't care that he chops off a man's head very satisfactorily with a sword - hey, the guy disrespected him - those were brutal times. Believe me, it's all worth it. (In truth, it's not that gruesome.)

You see, I make excuses so that I can continue to enjoy watching this film which remains one of the most romantic movies I've ever seen even if there is not a single love scene in the entire picture.

Not that I think the director, John Milius  (this is the guy who gave us DIRTY HARRY and CONAN THE BARBARIAN after all) - a real man's man from what I hear - intended to make a romantic film. Although you never know. It's possible, I suppose, that Milius was aware that sex and romance are not necessarily synonymous. (Which lots of today's directors and screenwriters seem to have forgotten if they ever knew it at all.)

But my friends, this is Romance on a Grand Scale: This is the Thrilling Romance of Adventure and Derring-Do. The Romance of Mysterious Places, of Dangerous Men Dashing About on Horseback with Flags and Cloaks Flying in the Wind. You get the idea.

Okay, on to the rather confusing plot:

In 1904, Germany, France and the British Empire are all jostling elbows for control of Morocco. The Sultan (played in the film to the arrogant hilt by the wonderful Vladek Sheybal) is apparently, a puppet of Western Imperialism. The relationships here are a little hazy, but it isn't necessary to know all the interlocking ifs ands or buts. However, if you're the sort who worries about that sort of thing, make up your own details. 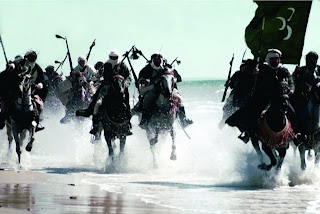 It is enough to know that the mysterious Berber brigand Mulai Ahmed er Raisuli (Sean Connery) is the leader of a large tribe of insurrectionists who will stop at nothing to embarrass the Sultan of Morocco and start a civil war. (That's the simple explanation.) 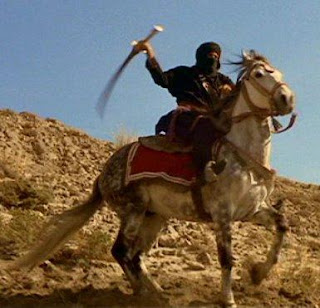 To that end, Raisuli's men kidnap beautiful widow Eden Pedecaris (Candice Bergen) and her two children, William and Jennifer, and make off into the desert wilderness, captives in tow.

An aside: According to Wikipedia, the real victims of the Pedecaris incident were a middle-aged man and his stepson - hardly the stuff of legend. The two were returned unharmed.

Raisuli then issues an outrageous demand to the Sultan for ransom, attempting to provoke an international incident.

Where the movie really works for me is in the larger-than-life personality of Raisuli (not to mention, his swashbuckling costume). Sean Connery's devilish smile and imperious attitude - he casually steps onto the bent back of a minion to mount his horse - tells you that this is a man who is complete master in his own small universe. A man who, nonetheless, exudes a great deal of almost tangible charm and allure - most especially in the mind of a small boy (Eden Pedecaris's son William) looking for a hero and ready to be impressed by a daring manly-man.

The hero-worship of the boy is developed nicely by Milus and leads to a wonderful moment in a scene done in slow-motion near the end which is very nearly worth the price of admission. It is one of two moments in the film which always make feel kind of swoony and lead to two very satisfactory sighs of contentment.

But I'm getting ahead of myself as usual.

Mrs. Pedecaris (as Raisuli calls her for the entire film) becomes a bur in the side of the brigand leader - a kind of itch he can't scratch. She refuses to kow-tow to Raisuli's overblown sense of importance. She has the temerity to talk back to him and in front of his men. She beats him at chess. How is this woman to be dealt with? 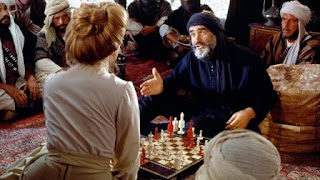 Primarily concerned with the safety of her children and her own dignity, Mrs. Pedecaris remains unflappable during the whole ordeal. This is handled very well by Candice Bergen in one of her better on-screen performances. She is just annoying enough not to be TOO annoying. And of course, she is exquisitely beautiful. (Never hurts.)

Having said all that, she is not immune to Raisuli's charm - I mean, who would be? 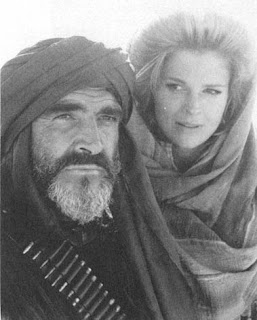 She softens towards him, especially when she realizes she and her children are in no real danger from the exasperated brigand. This is driven home when she bribes two of Raisuli's men to help her and the children escape and then finds herself at the villains' mercy out in the middle of the desert.

But all is not lost for who should show up in the dark of night but Raisuli looking very determined if not disgruntled. By himself he quickly dispatches the men - he hasn't even bothered to bring the rest of his crew - and informs Mrs. Pedecaris that she is a lot of trouble - in case she didn't know. He looks so wonderfully in charge, so commanding, so heroic, so....I don't know, SO manly, that you have trouble not responding. And the look on Candice Bergen's face tells you that she's feeling the same way. This is a man to be reckoned with.

Needless to say, young William is mighty impressed with Raisuli as well.

Will Raisuli and Mrs. Pedecaris ride off into the desert and live happily ever after? Of course it can't happen that way, this is not a romance novel, it's just a little bit of a fairy tale with international ramifications. Plus director John Milius is more concerned with the rugged adventure of it all. 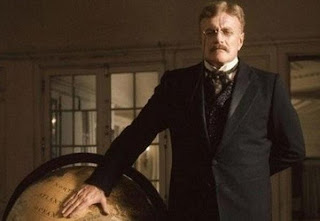 Now let's back up a bit and head on over to Washington D.C. where President Theodore Roosevelt (played wonderfully by Brian Keith) is involved in a dicey re-election campaign. The Pedecaris kidnapping seems ready-made for a spot of political propaganda. Roosevelt sees the benefit of intervention - 'Pedecrais alive or Raisuli dead!' It seems a satisfactory way to get the voters' attention as well as a chance for the USA to flex its newly constituted overseas muscle - much to the dismay of Roosevelt's Secretary of State John Hay (John Houston).

When the American consul to Tangier fails to negotiate the release of the widow and her children, Roosevelt orders American troops into the city to either retrieve Mrs. Pedecaris or force the Pasha to pay the ransom. The Pasha acquiesces to Raisuli's demands. 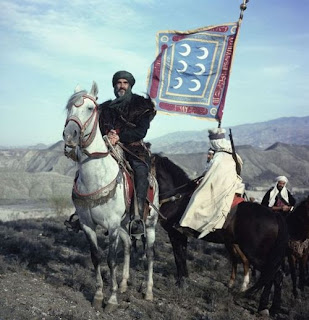 However, the Germans do not take kindly to this interference and when Raisuli shows up to hand over Mrs. Pedecaris and her children, he is betrayed and captured by German and Moroccan soldiers. (This part of the story is rather confusing but somehow, it's never lessened my enjoyment of the film.)

While diplomats haggle and Raisuli hangs upside down from the ceiling by his heels, Mrs. Pedecaris takes matters into her own hands and with her two kids and three rifles, she convinces the American marine contingent (who are rather bored at the lack of action) to help her free Raisuli. The brigand was promised safe passage by Roosevelt if Mrs. Pedecaris was returned unharmed. 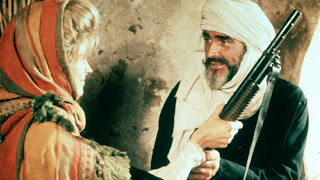 As for those two soul-satisfying moments I mentioned earlier, they both occur during the escape. I'm sorry, but you'll have to see the film to see what I'm talking about.

After that, there are fabulous end credits all to the stirring music of Jerry Goldsmith's powerful score.

I've learned recently - from reading Laurie R. King's latest book, GARMENT OF SHADOWS, that the real Raisuli was a conniving blackguard. But as I like to say, nobody's perfect.

For more details on the film's convoluted plot: the Wikepedia page.

Don't forget to check in at Todd Mason's blog, Sweet Freedom, where all the rest of today's forgotten films and/or other visuals will be listed and linked.
Posted by Yvette at 9:30 AM