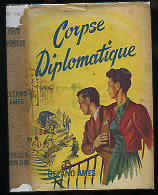 I've never traveled to Nice, France, but I've always wanted to. Now that I've read Delano Ames' charming mystery, CORPSE DIPLOMATIQUE published in 1950, I feel as though I've been to the French Riviera and had the most delightful time.

I'm having trouble containing my enthusiasm for this book, so I won't. I only merely LOVED IT! There, I've gotten that out of my system.

I'd read one previous Delano Ames book, SHE SHALL HAVE MURDER and liked it well enough to look for more. This one just caught my fancy and I read it in two nights though I easily could have read it in one if I hadn't minded going sleepless.

Dagobert Brown (the rather strangely named amateur sleuth/dilettante/intellectual) and his novelist wife Jane are supposed to be frugally traveling on the Riviera. Lacking any real money but managing always to be on hand for food and drinks amid the chatter and doings of all sorts of intriguing characters. Jane and Dagobert are usually also on hand when murder strikes.

What I liked immediately is that Dagobert and Jane have an unusual, though affectionate, off-key relationship. He urges her to work on her book, while he is supposedly researching some sort of thesis about Bertran de Born, an obscure and very ancient poet - that is, unless he gets sidetracked with one or another of his various interests. Work - day-to-day wage earning work - is anathema to Dagobert and Jane is indulgent of his whims though occasionally she wishes he'd bring home a paycheck or two.

This review will be filled with several quoted passages from the books simply because I can't think how else to convey my fervor for this sort of writing - it catches me up and takes me along every single time. If you don't instantly like it then you will not like the book and oh, poor you.

'Dagobert had in mind a lonely village perched on a rocky hillside in the Basses-Alpes where we could study Provencal, so we went to the Hotel Negresco on the Promenade des Anglais.

In this way we got our names in the Riviera-Gazette among recent arrivals in Nice. We were listed with the King of Sweden, Mrs. Stuyvesant Reinlander III of Philadelphia and someone called S.A. Bao U. I wasn't dressed for it but it was pleasant while it lasted.

"It's the only place I could think of," Dagobert apologised as he put his mackintosh and hobnailed boots in the vast Louis Quinze wardrobe. "It's nice and central," he added.

"Yes, I noticed the police station around the corner. Still they won't present the bill for a week, probably."

"It's all about local colour," he said cheerfully. "S.A. Bao U. will be useful when we visit Siam, or would it be Burma?...I wonder what the inside of a French police station looks like?"

"Dagobert," I asked suddenly, "did we buy return tickets?"

He removed the belt from his corduroy trousers and shook out his grey flannel suit which had been rolled up in a rucksack.

"I suppose one changes for dinner," he said. "Well, in a way no. It seemed such a lot to spend all at once. You worry too much about essentials, Jane."

I didn't say "somebody has to," though the thought did cross my mind. I live with Dagobert - in fact he is my husband - and I have learned that discussions beginning in this way never get anywhere.'

There, now you have a bit of the flavor of the book and of the relationship of our two amateur sleuths. A bit later out on the hotel's dining terrace, Jane joins Dagobert for dinner and can't help but notice that he's made himself completely at home.

'I found Dagobert sitting under a striped umbrella, sipping a Noilly Prat. He looked as though he owned the place. He stood up and held my chair for me. He was wearing a beret I'd forgotten he had. A copy of a French Communist newspaper was folded beside his saucer and he had bought a packet of Gauloises cigarettes. He gesticulated in a very Latin way as he asked the waiter to bring me a Dubonnet. He looked essentially, unmistakably English. I'd never noticed that before.

"One could be quite comfortable here," he said, handing me the salted almonds. "Or do you find the atmosphere uncongenial to work?"

"I don't want to seem mean-spirited," I said, accepting the almonds, "but are these thrown in?"

Properly he ignored the question. "We could probably persuade the management to provide a small table for your typewriter on our private balcony." he said. "If you feel the place really inspires you, I could doubtless take lessons in Provencal at the Universal School of Languages. How did you think of starting your novel?"

"You should," he said, sweeping the luxurious appointments of the terrace with an appreciative eye. "One has to pay for this sort of thing. Couldn't it begin right here...let's see...with what?"

He paused, frowning. I drank my Dubonnet and thought of other things. Dagobert is always thinking of ways for me to begin a novel. He has the mistaken impression that I am happier when occupied.'

Within moments, a dapper gentleman who'd earlier been giving Jane the continental eye in the lobby appears on the terrace, chooses the table immediately adjacent to the couple and orders un cafe. The little man can't help but be startled by the nature of Dagobert's conversation, centering on the best way to kill a man. (He is prompting Jane to begin her novel.) An amusing scene ensues made all the funnier by Dagobert's complete disregard of the sensibilities of his coffee-drinking neighbor though Jane is aware that the gentleman is growing alarmed byDagobert's murderous enthusiasm complete with sound effects.

Turns out that the little man is the courtly though womanizing Don Diego Sebastiano, Vice Consul in Nice for the insignificant Central American country of Santa Rica. Unknown to Dagobert and Jane, Don Diego is currently living in fear for his life and/or losing his cushy Riviera job, since the assassination back in Santa Rica, of the current President, his uncle. Hence his immediate alarm upon noting  Dagobert's blood thirsty conversation.

"What's a place like Santa Rica doing with a Vice-Consul in a place like Nice?"
"What, indeed?" Don Diego said gloomily.

At any rate, this has little to do with the main events in the story except to add confusion when just a few pages later after Dagobert and Jane have moved to the monetarily more suitable Pension Victoria (with a great view of the Mediterranean), Jane is practically a witness to the shooting death of Hugh de Courcy Arkwright, a debonair language teacher, fellow pensionair and blackmailer.

Of course we don't know right off the bat that the victim is a blackmailer, but eventually the truth - as is to be expected - will out. To add to the confusion I previously mentioned, everyone assumes that the intended murder victim was really Don Diego as he was seen walking on the promenade in the same vicinity. The bullet just missed him by inches. Therefore Arkwright's death must be a one of those nasty twists of fate.

Until Dagobert causes a stir in the Pension Victoria's dining room when he announces that Arkwright's death was no accident. Dagobert has a flair for drama as you may have noticed.

Time for a bit of introduction. Staying at the pension alongside the two sleuths are:

Mrs. Andrioli, middle-aged and earthy, who owns and manages the Pension Victoria.

Sophie Duffield, the uncommunicative daughter whose awkwardness makes her appear much younger than her 24 years. (Unknown to her uppity-crust mother, Sophie has an eye on Joe Orsini, American bartender at the Brooklyn Bar, a local dive.)

Iris Makepeace, flirtatious young married (with a husband conveniently half an ocean away, working in - coincidences of coincidences, the above mentioned Santa Rica - but more about him later) who apparently thinks nothing of indulging in an affaire d'coeur with -

French pianist Dieudonne Dompierre (known as 'Pierre' - thank heaven) who keeps a piano in his small room and was conveniently playing the chaconne from the Bach violin concerto meant for the left hand (a clue that goes nowhere as so many do in this story) at the time of the murder.

Jane writes : 'Apart from the above six people, there was a sprinkling of Swiss, Belgians and Scandinavians whom I never really got straight. I felt that six were enough to go ahead with, especially if I added - as Dagobert insisted - the personnel of the Brooklyn Bar and the Santa Rican Consulate...'

That would be Joe Orsini formerly of Buffalo, New York, Suzette (Don Diego's favorite sultry pick-up), Don Diego himself, Juan Moro (Don Diego's sullen driver) and later Henry Makepeace, Iris's not very sanguine hubby, who shows up out of the blue, moves in and apparently has no qualms about Iris and Pierre's entanglement. He claims he and Iris have an 'open' marriage. Right.

So, plenty of suspects, plenty of red herrings, plenty of motives to be discovered and plenty of supposed clues to be inspected and tossed aside. Dagobert and Jane aren't so much actual hands-on detectives as observers of human nature and proponents of 'what if?'.

Some of what happens is told rather than shown - supposedly a writing no-no - but here it works just fine.

This is a mystery in which the killer's identity doesn't matter as much as the fun we're having.

Read about author Delano Ames, his life and work here.

This week, B.V. Lawson is collecting the Friday Forgotten Book links over at her blog, In Reference to Murder, while Patti is away. Don't forget to check in.