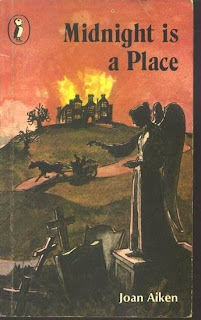 Joan Aiken was a prolific and very talented English writer who specialized in creating intriguing books for children and young adults. She also turned out some pretty terrific Gothic romance novels as well as stories based on Jane Austen characters.

I suppose Aiken is most well known and best remembered for the classic, WOLVES OF WILLOUGHBY CHASE - especially the version with the Edward Gorey illustrations. (My own personal favorite is MIDWINTER NIGHTINGALE (2003), which is part of the 'wolves' series.)

But in truth, Aiken was such a splendid writer that several of her books can be defined as 'classics' including MIDNIGHT IS A PLACE, a historical novel with an intense and very definite Dickensian flavor. This is a decidedly dark and forbidding 19th century 'orphans of the storm' story starring two rather plucky young orphans (Aikens' specialty), one English, one French, who must learn to survive on their own when their cruel guardian's mansion goes up in flames. No real loss since the house was grim and forbidding and falling apart to begin with (as was its owner).

Parent-less, Lucas Bell has been sent to live with his guardian, Sir Randolph Grimsby. Grimsby (you can tell by his name) is a surly, nasty piece of goods who'd won 'his' estate, Midnight Court and a nearby carpet mill which provides all his income, as the result of a crooked wager many years before.

Lucas has lived a sad, solitary existence for two years with no one for company save his humorless tutor, Mr. Oakapple. This all changes one day when little Anna-Marie arrives. At first extremely weepy and not at all the type of child Lucas was hoping to have as a friend (she can barely speak any English), she will soon prove her mettle to the unhappy boy.

Anna-Marie is a French orphan dropped out of the blue on an outraged Sir Randolph's doorstep. Mysteriously, it appears she belongs at Midnight Court but before we can learn the raison d'etre, there is an ugly Twist of Fate to contend with.

One gloomy night Sir Randolph meets his grisly end in a conflagration which destroys Midnight Court. The children's tutor Mr. Oakapple is gravely injured and insensible. The two orphans are cast out into the dingy, unfriendly streets of Blastburn, a dismal industrialized English town where the sun never shines and the steam and smoke clogged skies never clear. With no one to care for them, they must learn to survive on their own.

Most of the townspeople toil in the dreadful carpet mill owned by the late Sir Randolph. The factory is a dark, dangerous and forbidding place, its managers unconcerned with workplace safety - it is the 19th century, after all. Child workers are regularly killed there by the hideous machinery which is used in the manufacturing process.

Author Joan Aiken doesn't stint on any ugly realities when elaborating on the life lived by the downtrodden workers. We were earlier given a grand tour of the terrible building when Lucas is shown over the mill and told (to his dismay) he will someday inherit the business. But since Sir Randolph never paid any back taxes, the whole inheritance situation is mostly moot.

After the fire, neither child is especially eager to work in the factory (and who can blame them?) but they must quickly find shelter and figure out a way to earn some sort of living until Mr. Oakapple, the tutor, is back on his feet and can help Lucas lay claim to the burnt out estate.

The resourceful Anna-Marie is just six years old but clever enough to pick up discarded cigar butts in the streets and fashion them into full cigars which she will sell. Lucas becomes a 'tosher' apprenticed to an ugly unreliable sort who goes through apprentices at a suspiciously fast pace. They will toil in the nightmare world of the town's sewers picking up discarded refuse to sell, occasionally fighting off rats as big as cats and wild rampaging pigs which inhabit the sewers.

How these two children overcome their unfair share of ugly adversity and survive several frightening near-death experiences - one in the factory itself - is a hair-raising, well-told tale by an author who is an old experienced hand at spinning complicated webs full of doom and gloom - though never without a glimmer of sly humor.

MIDNIGHT IS A PLACE has a very Dickensian ending full of happy coincidences and an 'all's well that ends well' good enough for any reader unsettled by the earlier dismal doings.

An engaging book easily read in one evening. It would make for a good read-aloud (not for small children), especially at this time of year. It might also lead to some pretty interesting discussions with older children.

This being Friday, don't forget to check in at Patti's blog, Pattinase, to see what other Forgotten (or Overlooked) books other bloggers are talking about today.