Heaven, I'm in heaven,
And my heart beats so that I can hardly speak.
And I seem to find the happiness I seek,
When we're out together dancing cheek to cheek.
Irving Berlin

That's how I felt a few days ago, ladies and gentlemen, when I discovered that - are you ready for this? - SEASONS ONE THROUGH SIX OF THE ORIGINALLY WONDERFUL HERCULE POIROT SERIES FOR PBS MYSTERY ARE CURRENTLY AVAILABLE FOR STREAMING ON NETFLIX!!!!

David Suchet and Hugh Fraser return in all their early glory. You know how lackluster I found the later Poirots - when they changed the stories so much they became almost unrecognizable AND Hugh Fraser as Hastings was nowhere to be seen, not to mention, the utterly wonderful Philip Jackson as Japp and Pauline Moran as Miss Lemon. I mean, really!

This is an embarrassment of riches, my friends:

Especially since I'd forgotten many of the episodes, so it will be like watching again for the first time.

Off the top of my head, here are a few that do stand out in my almost depleted old lady memory bank:

THE MYSTERIOUS AFFAIR AT STYLES - Christie's first ever Poirot book! This has the wonderful scene where Poirot and Hastings meet up again after many years. Poirot is a WWI Belgian refugee in this and Hastings is a recuperating shell-shocked soldier. Who poisoned the rich, cantankerous old lady?

PERIL AT END HOUSE - a beautifully produced version very close to the book and photographed in a gorgeous area of the English coast. Who is trying to kill the very sympathetic and beautiful heroine?

DEATH IN THE CLOUDS - with the nasty wasp sting that wasn't. Poirot must solve a murder that takes place in front of his and every other passenger's eye on board a plane.

ONE TWO, BUCKLE MY SHOE - one of my favorites that begs the question: do the ends ever justify the means?

DUMB WITNESS - this was changed quite a bit from the original story, but the setting is so typically English country-side dreamy and the terrier dog is so cute, I never minded.

HERCULE POIROT'S CHRISTMAS - the episode in which Poirot must show a nouveau riche family, at the dinner table, how to carve a mango - I think. That's what I remember anyway. If this is the Simeon Lee episode, then it has the same villain trick as in Christie's play, THE MOUSE TRAP.

There are 32 ORIGINAL EPISODES in addition to the 10 episodes of Season One which we talked about a few months ago. Link to my original post.

42 EPISODES OF EARLY POIROT AND CAPTAIN HASTINGS AND CHIEF INSPECTOR JAPP AND MISS LEMON for viewing whenever I feel like it....You wonder that I'm in heaven?? 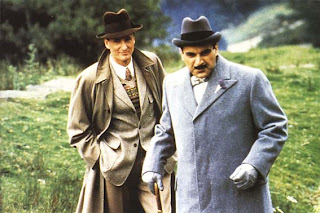 Poirot and the always sartorially correct Captain Hastings. A wonderfully funny scene from THE ADVENTURE OF THE CLAPHAM COOK (Season One) where Poirot extols the virtues of the 'good air of the town' as opposed to the discomfort and bucolic air of the countryside which, for him, is merely a place for 'trees and furry little things.' 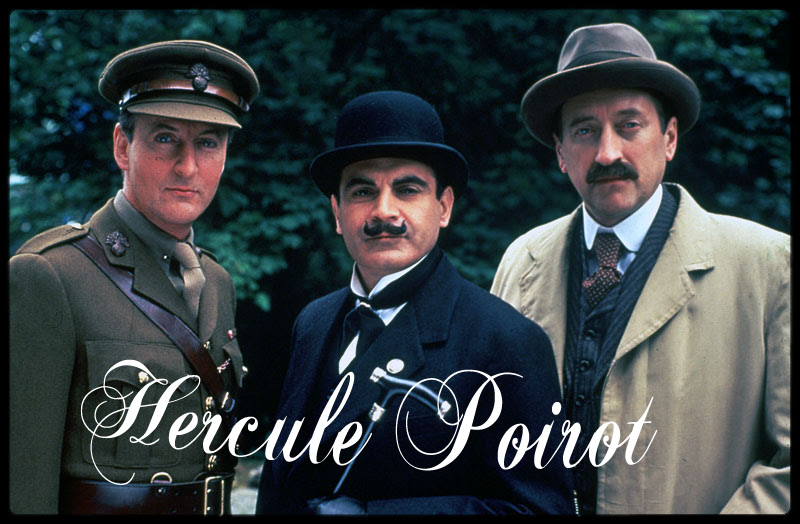 Captain Hastings, Poirot and Chief Inspector Japp of Scotland Yard. Still from THE MYSTERIOUS AFFAIR AT STYLES, I believe. 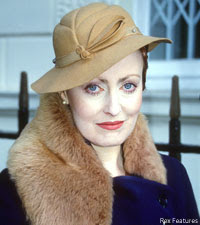 Pauline Moran as Miss Lemon who really doesn't have much to do in the books, but whose role was somewhat increased in the early episodes.


The charming duo of Calvin and Hobbes (shown at the very top of the post) are the creations of American cartoonist Bill Watterson.
Posted by Yvette at 1:08 PM