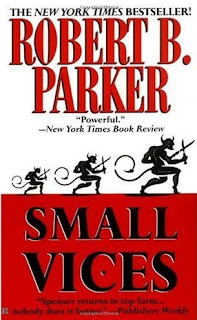 Today is Forgotten Book Friday (as usual) - my choice this week is SMALL VICES by Robert B. Parker. (Don't forget to head on over to PATINASE, Patti Abbott's blog to see what other forgotten books other bloggers are buzzing about.)


Boston private eye and general all-purpose tough-guy, Spenser (That's Spenser with an S - like the English poet) is drawn into an investigation at the request of old friend, Rita Fiore - once a lowly public defender now a hotshot at a prestigious private firm. Rita has qualms about a four year old case in which she did her inexperienced best but her client, a low-life named Ellis Alves, was convicted of the murder of Melissa Henderson, a college coed found strangled on campus.

Even though the thoroughly reprehensible Ellis Alves is/was the sort who deserves to be in prison for other crimes committed, Rita suspects he was not guilty of murder. She wants Spenser to relieve her guilt and possibly help right a miscarriage of justice.

When Spenser begins poking around asking questions, it becomes apparent to him that the two main witnesses to the crime are hiding something (or at the very least are behaving strangely), not only that but the cop involved in the original investigation is acting as if he, too, has something to hide - though maybe that's just incompetence, prejudice and shoddy detective work.

The thing is, Ellis Alves is a black man with a record and Melissa Henderson was a white girl with well-to-do parents, so everyone assumes Alves was guilty as hell and why doesn't Spenser just go away and let them all get on with their lives.

It also turns out that Melissa Henderson had a yuppy boyfriend who was never interviewed in the original case - a young man with an attitude and very, very rich parents. (That the boyfriend is a light-skinned African American adopted by white parents adds a unique twist to the mix.)

Spenser is the sort who, once he gets his teeth into something, just doesn't let go - kind of like a pit bull. It is what makes him such a relentless investigator. Eventually, he comes to believe that Ellis Alves was framed though there isn't any proof, just a working theory.

Within days the word is out that someone has hired an out-of-town hit man to take Spenser out. Obviously, Spenser has stepped on some sensitive toes.

This is the book in which we first meet the so-called 'gray man', a professional killer with no emotion, no remorse and no redeeming social qualities. He will turn up again in one of Parker's last books, ROUGH WEATHER, one of his best.

I can't say much more without giving away a couple of major plot points which help make SMALL VICES a stand-out in the long-running Spenser series. This is my second (or maybe third) time reading it and it still holds up as well as the first.

Though I'm not a fan of Susan Silverman, Spenser's girl-friend (boy is she hard to take), she isn't as obnoxious as usual in this book. Hawk (Spenser's close and very dangerous friend) is on the spot as back-up as well as Vinnie (a bad guy who works for the local crime boss - both men who happen to respect Spenser) and a couple of Spenser's cop friends who rally round when he and Susan are threatened. Last but certainly not least are the many quips and Spenser-isms we've all come to love and expect.

This is top-notch Spenser, the late Mr. Parker writing at his very best.