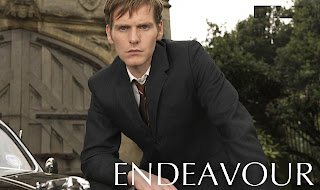 I wasn't going to watch this because, really, what would it be like? I suffered through Morse's death (and the real life death of John Thaw) and did I want to be reminded?

But PBS has the entire film for view on its website. So I took a chance and was rewarded with something really quite special.
For years we never knew what Morse's first name was as he was always referred to, simply, as Morse. But once we found out (near the end of the original series), we kind of understood his disinclination to reveal it.  It is an odd name though in some strange way, entirely appropriate.

The film is a prequel to the original series and it stars someone I am totally unfamiliar with, Shaun Evans. (Where do the Brits keep turning up these wonderful - and quirky - young actors? Never mind, where - how?)

It's a bit difficult to imagine Evans as the future Morse, but there is some vague resemblance. Close enough. Here he is an opera loving, gawky youth, a loner with a laser like mind and an ego to match.

In the story, set in 1965, we are treated to Constable Morse's first few awkward days on the job. We meet Inspector Thursday (Roger Allam), an honest cop who becomes Morse's mentor - more or less. (Though Morse is obviously the more brilliant of the two.) These two work wonderfully together - Allam is an especially likable actor. The rest of the cast isn't bad either. These things are always so well done, rarely a dud in the bunch. 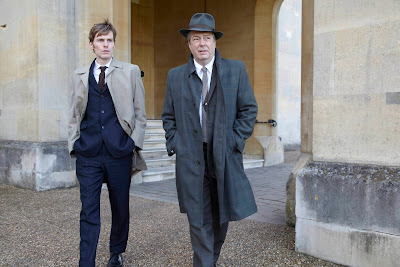 Morse's first case is a difficult one. The disappearance of Mary Tremblett, a fifteen year old girl, later found strangled, her body tossed naked, in a wood. The police brass who are, themselves, under the thumb of a local, slimy, blackmailer (a car dealer, natch) would like the whole thing to go away.

Especially when it looks as if Mary's sad death and the 'suicide' of an Oxford student are tied together and may lead back to the university itself when one of the professors comes under suspicion of hanky-panky with the underage girl.

This particular professor happens to be married to the an opera soprano whom Morse idolizes. She has retired from performing and seems happy enough just to be a faculty wife. Morse is bowled over at meeting her and tells the story of how it was her sublime singing (most especially an aria from Puccini's Madame Butterfly) which taught him - as a child growing up in a bleak world - that beauty existed.

The entire story itself would fit the operatic mold of high melodrama, unrequited love, sex, death and destruction. Especially the very affecting ending.

Morse is shown to be as relentless and impatient when young as he was when we met him years later. He is devoted to the truth, no matter where it might lead.

My favorite scene: Morse is driving Inspector Thursday's Jaguar, the Inspector at his side. Thursday is talking about Morse's possible future. Morse looks in the rear view mirror and suddenly we hear the haunting sound of the original Morse music by Barrington Pheloung - just a little - and we see a familiar forehead and white hair in the mirror. It is an emotional moment.

I hope ENDEAVOUR becomes a series. 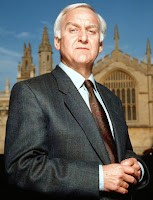