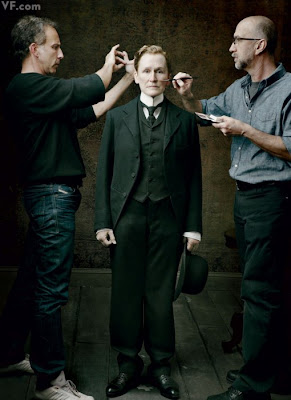 I was looking forward to seeing Glenn Close in this Oscar nominated performance simply because I like her so much. Plus I found the whole idea of a woman passing herself off as a man, especially at that time in history (the setting is Ireland in the early part of the 19th century) - fascinating. Historically, it was, let's face it, an economically viable solution. There were few good jobs (or even bad ones) to be had for women and survival depended on your wits and willingness to adapt to circumstances.

Albert Nobbs is a natty, quietly reserved employee of a hotel in Dublin which caters to the rich and lively. In contrast, Nobbs might just as well be invisible which is the basic problem - the character does practically disappear into the woodwork.

Besides Glenn Close's controlled performance, there's that of Janet McTeer as a rough and rugged man who also (coincidence of coincidences) happens to be a woman in disguise. She is remarkable and was also nominated for an Oscar. The make-up is incredibly good as is the photography.

Both women had to learn to move like men and they did - which couldn't have been easy in and of itself. If I recommend the film at all, it is just to watch these two actresses go about their business.

But other than that, there's not much else to recommend. The story is dulls-ville and the ending is 'meh.'  Never once, in out gut, do we really care about these characters, nor are we really moved to wonder about them. Not much really happens and despite the efforts of Close and McTeer, the film is a disappointment.

It's a shame because Glenn Close has been working on this project for years, trying to get the money and backing and whatnot to get the film done. But as so often happens when someone works on a labor of love for ages, the end result can show fatigue. The film-makers took an intriguing idea with many possibilities and gave it too much reverence.

Here's a link to a well-written review for the film at Critic Studio, and one with which I basically agree - though their reviewer liked the film more than I did. 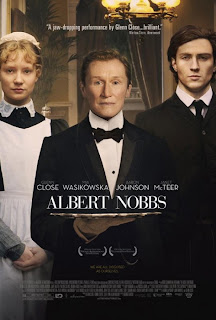