Charlie Chan in MURDER OVER NEW YORK (1940), a film directed by Harry Lachman, is my entry in today's Forgotten (or Overlooked) Films, a weekly meme hosted by Todd Mason at his blog, SWEET FREEDOM. Don't forget to check in later and pick up the links to today's participating bloggers, there are bound to be some intriguing films and/or audio visuals listed.

For reasons that are never adequately explained, Charlie Chan is on his way from Hawaii to New York to attend a police convention - something he does with amazing regularity over the course of several films. (Do they even have those things anymore? I mean, a trip from Hawaii to NYC in the 1940's was a heck of a trek.) And of course, murder always ensues. Usually the victim is a policeman friend from Scotland Yard. (The Yard is slowly but surely being plucked of its inspectors - at least those who are friendly with Charlie Chan.)


It's no different in this particular film as Charlie meets up with former Scotland Yard and now Intelligence agent, Hugh Drake (Frederick Worlock). Of course the minute they meet on the plane, it's uh-oh. You know the poor guy is doomed. It's too bad because Frederick Worlock can be (and is in this film) a very charming actor. You'll probably recognize him from the Sherlock Holmes films with Basil Rathbone.

While on the plane, Drake and Charlie get to talking and Drake reveals that he's on the hunt for a saboteur. You wouldn't think this is the sort of thing that would be discussed out in the open for anyone to overhear, but apparently that's not an issue in these films. Maybe all the other passengers had cotton in their ears. After all, we need to find out immediately (and quickly) what Drake is up to since we know he's not long for this world.

Turns out Drake has chased the elusive saboteur (a master of disguises) from pillar to post, well, from England to India then all over the east until finally settling on the saboteur's wife (who ran away from her nasty brute of a husband and has since been traveling incognito, on her own, doing odd jobs all over the world - yeah, I know, SO far-fetched). The wife apparently knows next to nothing about anything - she's played in a typically vacant manner by the exceedingly vacuous Marjorie Weaver, a staple in several of the Charlie Chan films.

Anyway, everyone winds up in NYC and presumably the master saboteur is there as well, disguised so well that even his own wife doesn't recognize him. She is useless as a witness.

A favorite character in the film is George Kirby (Ricardo Cortez) - you know my crush on Ricardo. I watch this film all the time just to reacquaint myself with his smoldering good looks. Unfortunately he gets bumped off later in the film and we never really know whether he was good or bad - his constantly shifty eyes made me think he was guilty of something, for sure.

Kirby meets the plane in NYC (literally, since in those days you could walk out on the tarmac and up to the plane). It turns out he's giving a dinner party for Hugh Drake that night with a guest list suggested by Drake.

Also at the airport, unexpectedly, is Jimmy Chan (Victor Sen Yung) who has driven cross country with a friend to attend the World's Fair (if memory serves) of which we hear nothing further in the rest of the film. 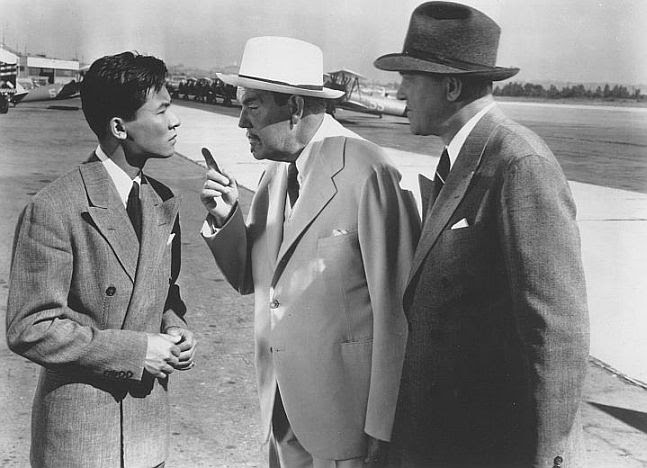 Later that same night, Drake is found dead in a room Kirby had turned over to him as an office. Oh, meant to mention, George Kirby is president of an aircraft company which has recently been hit by saboteurs. Coincidence? I think not. Though he seems remarkably unconcerned. 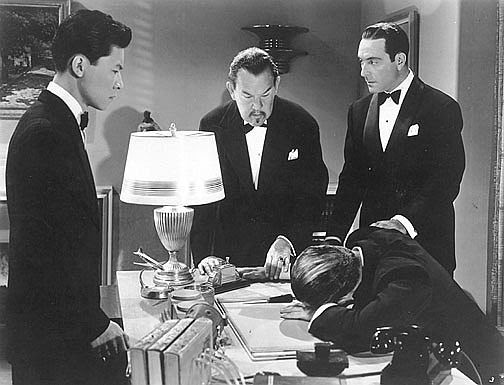 Among the guests for dinner at Kirby's are Ralph Percy, an engineer at Kirby's company, played by the gorgeous and resolute Kane Richmond. Richmond was a fixture in mysteries, noir films and serials of the 40's.

No reason to show this pix of Kane Richmond other than the fact that he's a hottie.


It's a relatively small dinner party with those in attendance presumably having something or other to do with the saboteur case, though Chan and the police are unsure just how they're all connected since the man who might have told them is dead. Hugh Drake was apparently killed by poison gas released from a glass pellet. The type of gas, 'tetragine' is somehow deduced by Jimmy Chan who has, apparently, been studying untraceable poison gasses at college. (!?)

It's obvious that the elusive saboteur is one of the men in attendance - but who? Suspicion falls on Kirby's butler, Boggs (Leyland Hodgson - yet another refugee from the Sherlock Holmes films). The butler did it? Nah. Don't you believe it.

The next twist comes when the saboteur's wife Patricia Shaw (Marjorie Weaver) is tracked down by Charlie Chan. The rather boring Robert Lowery in his usual role of romantic interest plays Shaw's boyfriend. He's a chemist. Get it? Chemist. Explosives. He's been working on his own, developing a new type of.......all together now: explosive! - of course.


Charlie Chan, with Jimmy in tow, must now chase around New York looking for clues. They are shot at prompting Jimmy to say, without any trace of irony, "This is the last time I go on a case without a gat." Oh Jimmy, Jimmy, get hold of yourself.

The two break into an antiques shop in the Village being used as a front for poison gas manufacturing (!?) and Charlie eventually brings all the suspects together for an unexpected flight on a new experimental plane designed by the deceased Kirby's company.

As usual, it's all preposterous (the plot really makes little sense) but tons of fun. If you like early 40's mysteries, you'll love this one. I do. But then, as many of you know, I'm a Charlie Chan fan-girl.