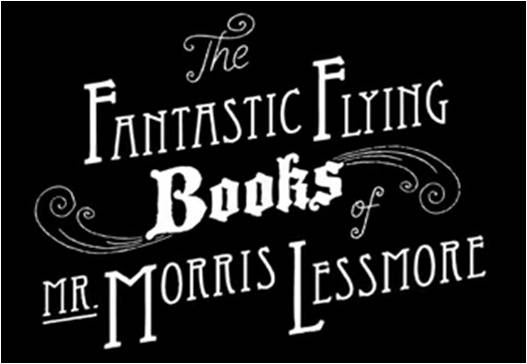 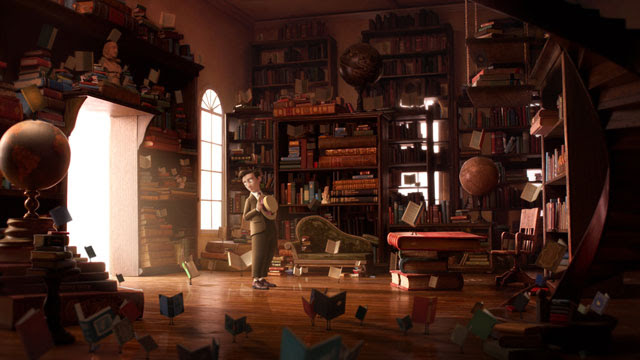 First things first. Don't be a dope - like me. If you haven't seen the video, drop everything and use the link I've enclosed to this brilliant Academy Award winning short animated film.

Time spent watching THE FANTASTIC FLYING BOOKS OF MORRIS LESSMORE (2011) is time very definitely well spent. (It's only about ten or so minutes.)


I saw the film this morning thanks to my friend Jean in Colorado who put the link on Facebook for me. I'd totally forgotten about this little gem. THANK YOU, Jean!

Using a combination of techniques including computer animation, 2D animation and miniatures, William Joyce and co-director Brandon Oldenberg fashioned a hybrid mix of animation which is beautiful to behold. The hurricane sequence in the beginning of the film is spectacular. The later quieter scenes among the books are moving and quite lovely and in one sequence when Morris dances with the books to the tune of Pop Goes the Weasel your heart just bounces along with him. This is what modern animation should look like.

Inspired in equal measure by Hurricane Katrina, Buster Keaton, The Wizard of Oz, and a love for books, The Fantastic Flying Books of Morris Lessmore is a poignant, humorous allegory about the curative powers of story. IMDb.


Link to The Fantastic Flying Books of Mr. Morris Lessmore

To learn a more about the animated film, the studio (Moonbot Studios of Shreveport, La. - William Joyce's hometown.) and see a pix of the triumphant Joyce and co-director Brandon Oldenberg at the Oscars, please use this link. 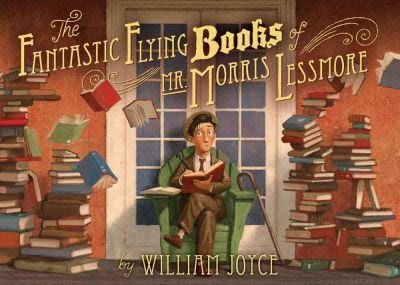 Now there's a book available in conjunction with the film from the magical hands, brains and artistry of William Joyce, creative genius. Turns out that Joyce began work on the book in 1999 (according to IMDb) and it's only just now being published. A must-have, far as I'm concerned.

And for those of you with tech inclinations and an i-phone or i-pad - there's an app available which as I understand it makes the pages of the book come alive. (This news come direct from Moonbot Studios who were nice enough to contact me and thank me for the plug.)