A Mysterious Island.
An Abandoned Orphanage.
A Strange Collection of Very Peculiar Photographs.

I believe this is Ransom Rigg's first novel and I suspect it will not be his last. He is a fellow blogger, a film-maker, a travel writer and an essayist and while he doesn't have the finely tuned hand of an assured novelist, he comes close in his debut.

According to Riggs there will be a sequel to Miss Peregrine. (Which I suspected from the ending.) Also I read online that Tim Burton might be looking to make the film - no surprise there - it's a project that's right up his particular alley.

MISS PEREGRINE'S SCHOOL FOR PECULIAR CHILDREN is a book based on a batch of odd, assorted vintage photographs. From the cover photo alone, you suspect immediately that you're in for something unusual and you'd be right.

"All the pictures in this book are authentic, vintage found photographs, and with the exception of a few that have undergone minimal postprocessing, they are unaltered. They were lent from the personal archives of ten collectors, people who have spent years and countless hours hunting through giant bins of unsorted snapshots at flea markets and antique malls and yard sales to find a transcendent few, rescuing images of historical significance and arresting beauty from obscurity..."

To say that most of the photos featured in the book are odd is an understatement. The creepiness quotient you'll have to figure out for yourself. But I did wonder over and over what on earth was really going on in these photos. What the photographer was trying to say. What circumstances led up to a particular photo. Who were these people?

Ransom Rigg's explanation is as good as any. 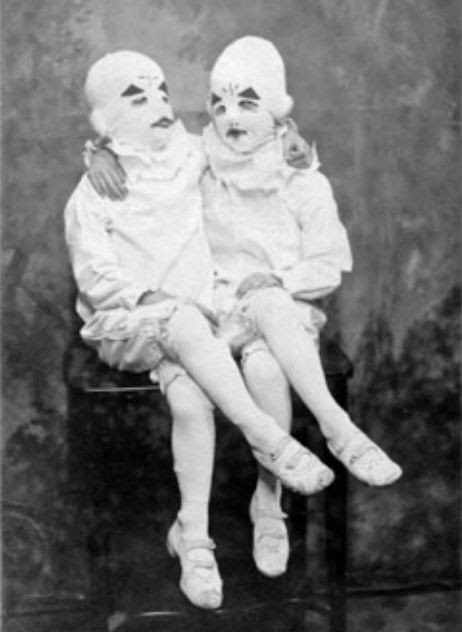 Jacob Portman is a stressed out Florida teenager with a head full of fanciful stories of a mysterious island in Wales where his grandfather spent his childhood. The stories are those which Jacob's grandfather had always told him and which Jacob, when very young, had always believed.

In Poland, just before the onslaught of WWII, Grandpa Portman's parents had shipped him off to a safer place while they stayed behind and perished in the Holocaust.

The stories his grandfather told Jacob were sketchy, full of the weird doings of children left behind at the orphanage on the island. The stories were not without threat from some mysterious monsters and as Jacob grows older, he tries to understand them as allegories of the dreadful loss his grandfather had experienced at the hands of the Nazis. But after awhile not even that can explain his grandfather's irrational behavior. Apparently, he has become just another delusional old man.

But when a horrible event occurs, changing Jacob's life forever, the result is a boy plagued by insistent nightmares and irrational fears. His hapless parents, fearing for his sanity, bring in a psychiatrist to tend to their troubled son and continue Jacob's schooling at home to reduce the stress factor.

When it appears as if only a visit to Wales and the mysterious island where his grandfather once lived can cure Jacob of his imaginary fears, he and his father set off.

What Jacob finds is a bombed out wreck of an old mansion, a cache of ancient photographs, some very peculiar children (whom logic says should not be there at all) and the impossible truth of what his grandfather had always tried to tell him.

The quirky photos included in the book upstage the story concocted around them, they are creepier than any invented author explanation. But this is still the sort of colorfully told story that will make you think twice about all those old photos you might have stashed in the attic or basement. I know I'm going to take a closer look next time I'm at a flea market. 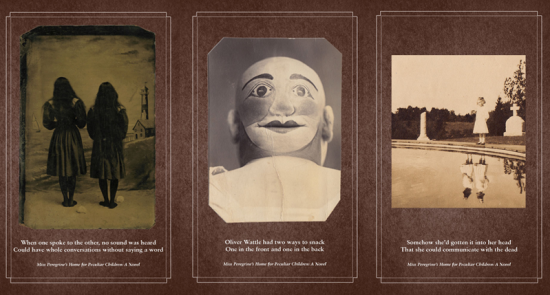