Pinning the Blues Away, Unhappy News Away... 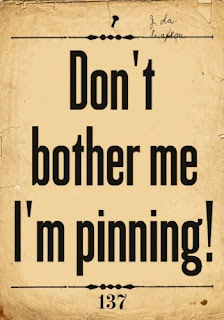 In case you hadn't noticed, Pinterest is the newest, space-age way to waste enormous amounts of time. What's more there's something about it that's so darned addictive that before you know it, you're glued to the site with no notion of how the hours in the day seemed to have disappeared and suddenly it's time to order pizza for dinner.

It is the strangest thing.

Now, I can't imagine anyone who isn't visually acrobatic liking Pinterest much - in fact they'd probably be disturbed by the whole idea - see no point in it whatsoever. (I know several people like that.) But for those of us who think visually, Pinterest is probably heaven sent.

I actually see it as a great research resource for artists, designers, decorators, photographers and the like. But also, no point denying it, it's a fabulous way to waste time when you're looking for relaxation and perhaps a way to disengage the brain for some periods of time. It's a great de-stresser.

Pinterest (for those few of you who don't yet know) is a series of virtual bulletin boards whose content you set up yourself - as many boards as you like with as many pins as you like. You set up the pinning apparatus (It's so easy even I was able to do it on my own.) then you're ready to pin away most any picture you find on any website. Pinterest automatically links back to the source from whence the pin came, but it's still best to type in the source or the artist's name if you can find it. (Do your best to find it.)

You can pin from the internet or repin from other pinners' Pinterest boards themselves. And you build up 'followers' sort of like 'friends' on Facebook. This is the least of my interest. I don't care to be the most followed or the most talked about or the most popular. I just want to have fun designing my boards and pinning whatever interest me. I have fairly eclectic  tastes, so you might imagine that my boards reflect this. And to what end - you might ask. Well, for me, it's like a scrapbook or bulletin board of visual ideas that might or might not spark a drawing or a blog post or whatever.Actually, I don't think I need a reason. 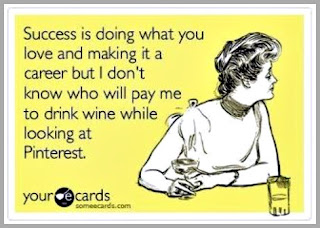 Pinterest for me is like 'esoteric checkers' in that I get to move things around and make visually pleasing boards of things that interest me in one way or another. It can be, at least in my case I like to think it is, a way to fashion virtual collages as well.

There are all kinds of copyright issues being bandied about re: Pinterest and in fact, someone said it can't possibly last much longer. But I don't know, it seems to be growing by leaps and bounds to me. Traffic to Pinterest's site is enormous. But maybe a class-action suit will put a stop to it - supposing one is in the works which I know nothing about.

It's best, therefore, to make sure to give credit where credit is due. I tend not to repin unless there's some sort of credit given. Though occasionally (more often than you would think) it is almost impossible to know where a pin came from originally. There are MANY sites which show a multiplicity of beautiful pictures with no artist or designer or photography credit whatsoever. Pinterest didn't start that and there's no point blaming them for it.

As with any new online experiment or venture, therer are growing pains and bumps in the road. Many sites are now installing a widget that prevents any pinning. Which, by the way, I think is extremely short-sighted of the website's owner. Pinterest should be looked at as a gold mine of opportunity. Another great way to spread the news about your particular talents. 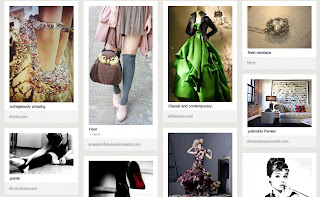 Look, if someone is going to appropriate your picture of a basket or a necklace or a cupcake or a copy of the Mona Lisa, what exactly are they going to do with it? There are various artists online who allow their work to be pinned. They obviously are not inclined to think that showcasing their work is a bad thing. They're comfortable with the whole idea. But I've seen some of the silliest things made unpinnable by a site's owner - things I can't even imagine a nefarious purpose for. I mean, use your common sense.

And by the way - How can anyone have the copyright on a painting by an artist dead for two centuries? Just sayin'.

I will add though that there appear to be a lot of screws set loose on Pinerest. I can say no more. Luckily all you have to do is unfollow and all is generally well.

Maybe a bit more: It's no secret that there are some REALLY odd people in the world - and not always odd in a good way - many of them have discovered Pinterest.. There are people for whom 'taste' is a foreign word with no particular meaning.  There are people who don't quite understand that art, photography and design are ACTUALLY created by someone - artwork, etc, doesn't just spring into being by some magical wave of a wand..(I do occasionally despair over the educational system in this country and the product they're turning out.)

There are also people seeking answers to life's woes on Pinterest. Also lots of young gals planning weddings and lots of home-makers (are we still using that word?) exchanging recipes, household tips and whatnot. Not to mention a helluva lot of people who love shoes and are enthralled by braided hair.

Unfortunately, there are also people who have no clue that other people might not be enchanted by their stupidity. But as I said, you can dismiss with all that simply by unfollowing and/or not checking out 'everybody' when looking at pins. You can also report a pin if you like. I haven't had to do that yet.

The time is fast approaching too when there will be 'private' boards and a way to erase any follower you are disenchanted with. Right now you can simply erase the pins of that pinner, but not the pinner themselves from your master list of 'followers'. But that's okay, you don't have to look at the list unless you want to.

Pinterest, like anything else on the internet, is what you make it. So far it's been fun for me. A great way to relax and de-stress.

Years ago there was a magazine called VICTORIA which was one of the more visually pleasing periodicals ever published. (The current VICTORIA is only a shade of its former wonderful self.) I look at my Pinterest boards as my own way to bring VICTORIA back. Those of you familiar with the magazine will know exactly what I'm talking about.