An otherwise run-of-the-mill sit/com (debuted in 2010) which is saved by the incandescent and downright hilarious inclusion of the amazingly wonderful Betty White. She MAKES the show.

Do you get the idea that I love Betty White? I hope so. Because I do.

Typically, the show makes little sense. It features three slightly over the hill (but fabulous) women, Wendy Malick (whom I adore) Valerie Bertinelli (whom I like very much) and Jane Leeves (whom I like well enough) who play best friends. The casting is really not far behind Betty in talent and likability. The premise is that while women of a 'certain age' go under appreciated and overlooked in Hollywood, land of the young, in Cleveland, these women are still considered 'babes'.

She plays a salty landlord, whose house the three Hollywood 'babes' are renting while in Cleveland. They've landed there by misadventure when their plane to Paris has an unexpected mishap.

All three women are bowled over by the attention the local males lavish on them, so they decide to stay in Cleveland for awhile. I mean, wouldn't you?

Anyway, of course they wind up with a charming house, fully furnished, and Betty White (who lives in the caretaker's cottage on the property) as the adorable landlord who is always around, ready with a quip or a stinger guaranteed to make you laugh.

At 90, Betty White is just as funny as she's ever been, her line delivery is perfection. The woman is unstoppable, not to mention, irresistible. As I said, she makes the show for me, though I do like the rest of the cast which also includes the wonderful Carl Reiner as Betty's occasional boyfriend. 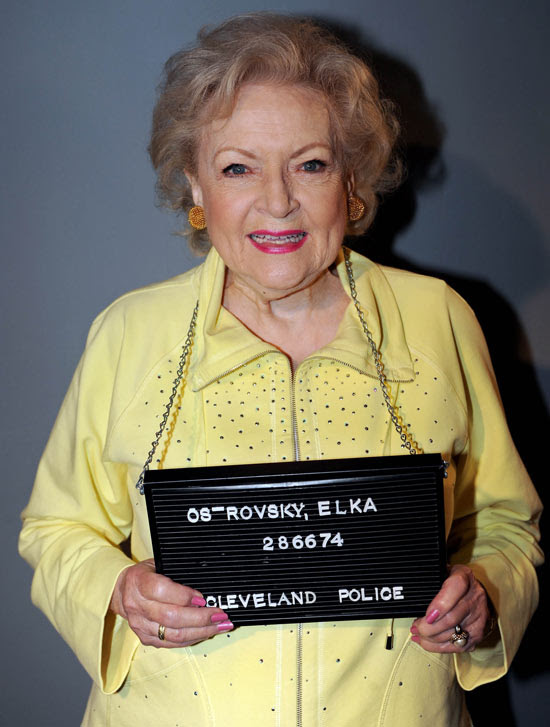 Betty White's perp pix when she is arrested for...well, you'll have to see the show. I howled with laughter as she poses for her mug shots.

I've watched a few of the episodes one after the other (which is perhaps not the best way to watch comedy) on Netflix, and intend to watch more. Though recently I realized that the shows on Netflix appear to be out of order. No wonder I had trouble following the concept.

The series was created by Suzanne Martin (Frasier, Ellen) and has been renewed for a fourth season on TV Land. So, there's plenty left for me to watch.

To get the full low-down on HOT IN CLEVELAND, please use this link to the show's website.
Posted by Yvette at 12:59 PM